RECAP: Ireland U16 men just lose out to Sweden down the stretch 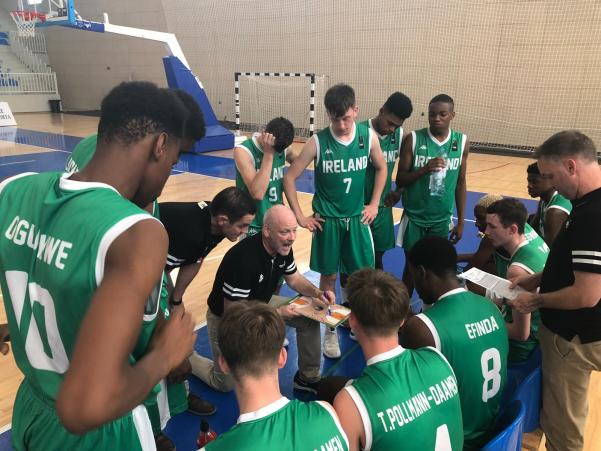 In Montenegro, Ireland U16 men lost out to Sweden 74-82 in their first classification game of the 2019 U16 Men’s European Championships Division B.

ND Okafor had a near triple double for Ireland finishing with 23 points,18 rebounds and 6 blocked shots in a standout performance but it was not enough to get them over the line.

In a cagey start to the game, both teams were missing some good looks but as they settled, those looks started to drop. Clinton Efinda got Ireland off the mark before ND Okafor hit 8 points with a Tim Pollmaan-Daamen three, Darragh Ferguson lay-up and Mobi Ilegwuruka free throw making up Ireland’s 16 -14 point lead.

The second quarter saw Ireland change up their defense and cause Sweden a lot of problems, they forced 16 turnovers and had 10 steals in the opening half. Sean Pollmann-Daamen and Michael O’Mahony were knocking down their open looks and Ryan Djoussa and Roneil Oguekwe were disrupting Sweden inside. Okafor had a double double already with 12 points and 10 rebounds in this opening two quarters and at the half Ireland had a 13-point lead, 38 – 25.

The third quarter saw Sweden switch gears offensively, they started to make some shots from the outside and their defensive intensity forced turnovers giving them some easy finishes. Ireland called a timeout and refocused, but the damage was done, and Sweden were just 1 point back going into the fourth. Efinda, Okafor and Ferguson worked hard for their scores and it was 58 – 57 to Ireland going into the fourth.

Ireland started the fourth with a 6-point run on the back of Okafor and Ikegwuruka to push their lead back out to seven but Sweden answered back and knocked down two triples. It was back and forth for the next series of possessions before with just over two minutes to go, Sweden retook the lead and they didn’t look back. It finished 74 – 82 to Sweden.

Ireland will face the loser of Finland and Ukraine at 12:45 tomorrow, Friday, in the 13th – 16th Bracket.