RECAP: Ireland U16 men lose out to Iceland and finish in 16th 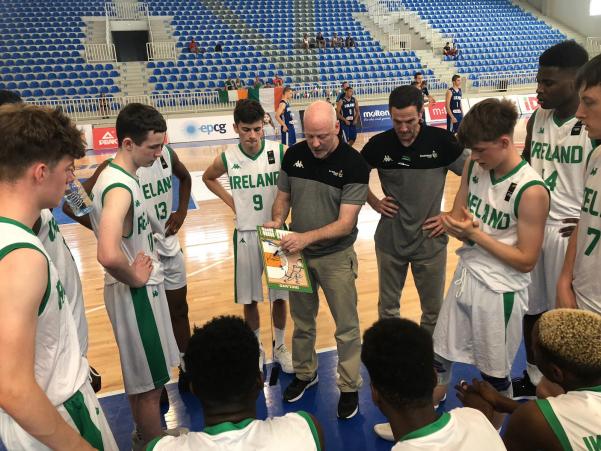 In Montenegro, Ireland U16 men lost out to Iceland 67-75 and finish in 16th place at the 2019 U16 Men’s European Championships Division B.

It was a poor start for Ireland, they struggled to deal with Iceland’s full court pressure which forced turnovers and allowed some easy scores. It was nearly 6 minutes in before ND Okafor got Ireland off the mark with Darragh Ferguson, Clinton Efinda and the impressive Roneil Oguekwe rounding off Ireland’s scorers, it was 8-18 going into the second quarter.

Oguekwe kept the scoreboard ticking over coming up to halftime but Ireland couldn’t break the double-digit deficit. Okafor and Mobi Ikegwuruka with Wede Esajobor also contributing scores. Iceland were doing an excellent job of maintaining ball pressure and forcing Ireland into tough contested looks. It was 22-35 at halftime.

The second half was Ireland’s best since the Georgia game. It would have been very easy to drop their heads, but this group of young men stood up and played some great basketball. Okafor found some more room to work and had 8 of his 14 points, Ilegwuruka had 12 of his 15 points, capitalising on some great defensive pressure and making free throws when fouled. Ireland were still 11 down going into the fourth but had found some rhythm, it was 50-61.

Ferguson and Tim Pollmaan-Daamen hit threes to open the fourth and Ireland were back in the game, Iceland responded and when Okafor picked up a harsh second unsportsmanlike and had to leave the game with over 8 minutes to go, Ireland showed their character and responded again. Esajobor and T Pollmaan-Daamen brought the deficit back to 5 before Oguekwe had back to back run outs after some excellent defense and it was a 1-point game with just over 5 minutes to go. Ferguson had a massive 3 to tie things up at 67 a piece with 4 minutes to go but that was it, an Iceland timeout allowed them to settle and they pulled away down the stretch for the game to finish 67-75 Iceland.

Ireland had four players finish in double figures scoring with Oguekwe (13 points & 13 rebounds) and Okafor (14 points and 10 rebounds) also having double doubles. Okafor has averaged a double double every game and leads the tournament in rebounding (14.3) and double doubles (8).