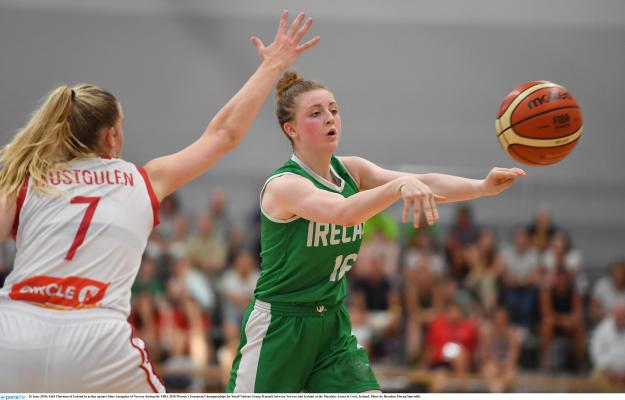 The Ireland Senior Women’s squad are in action in Estonia and Norway this week for a four-game series against the respective hosts.

First up for the women in green will be a stop in Tallinn, Estonia where they will go head-to-head with the home side in two games on Tuesday, August 27th and Wednesday, August 28th. The squad will then fly on to Oslo, Norway where they will face the hosts in another two-game friendly series on Friday and Saturday, August 30th and 31st.
This series of games is part of the squad’s preparations for the 2020 FIBA Women’s European Championships For Developing Countries, which will take place next summer. One change has been made to James Weldon’s side in advance of the games, with Templeogue’s Lynn Tunnah called into the squad in place of Fiona O’Dwyer, who has been called back to Spain on club duty.
You can follow updates from the games on the Basketball Ireland Twitter account (@bballirl) and on the Basketball Ireland website, www.basketballireland.ie.

The Irish senior women’s team rounded off their four-game international tour with an emphatic 69-46 win over Norway in Oslo this evening (Saturday).

Ireland had lost out on the buzzer the previous night, 69-67, but just like with the Estonian leg of their tour where they rebounded from a 77-67 opening game loss to resoundly win by 16 points the following night, the James Weldon-coached squad showed their resilience to soundly win the second game in a back-to-back series, containing Norway to just 13 points in the second half.

Ireland came straight out of the traps, led by co-captain and game MVP Edel Thornton and thanks to eight early points from the Cork woman, were up 22-13 at the end of the first quarter.

Norway rallied, holding Ireland to just seven second-quarter points to lead 33-30 at half-time but Ireland were simply extraordinary after the break, especially on the defensive end of the floor.

At one stage in the third quarter they went on a 17-2 run, making 13 consecutive stops, and although the Norwegians had a brief scoring spurt at the end of that penultimate quarter to cut Ireland’s advantage to just eight points, 48-40, Ireland simply drove on again to completely dominate the final 10 minutes, crowning with a terrific three-pointer in the closing seconds by newcomer Lynn Tunnah.

Everyone made a significant contribution. The inspirational Thornton hit a game-high 22 points and pulled off a remarkable nine steals, while ably assisted in the backcourt by Anna Kelly (11 points), as well as Claire Rockall and Áine McKenna who were making their 25th and 20th international appearances respectively, For the fourth consecutive game, Áine O’Connor pulled down at least nine boards as well as making three huge blocks in a masterful defensive display, while Hannah Thornton, Fiona Scally and Gráinne Dwyer completely dominated the paint on both ends. Aisling McCann, Cathy Kavanagh and Anna Maguire were all part of defensive stretches when Ireland held their opponents scoreless for nine consecutive possessions.

The squad now return home tomorrow morning (Sunday), buoyed by this part of their preparations for next June’s European small nations tournament.

The Irish senior women’s team suffered an agonising 69-67 loss to Norway on the buzzer in Oslo as part of their four-game away tour in preparation for next year’s European small nations tournament.
A brilliant turnaround three-pointer from Gráinne Dwyer with eight seconds remaining dramatically tied the game but from their resultant timeout Norway managed to get a successful bucket off in the lane with just 0.4 of a second left to shade the first of a two-game series between the teams.
James Weldon’s squad, coming off a big win in Estonia on Wednesday, certainly couldn’t be faulted for effort. They edged both the offensive and defensive rebound count by a board, and rallied numerous times when the game looked like it was slipping beyond their grasp. Gráinne Dwyer had her third double-double of the tour, finishing with 19 points and 10 rebounds, Fiona Scally came off the bench to score 10 huge points inside, while Aíne O’Connor for the third consecutive game pulled down at least nine rebounds, finishing with 11 here as well as standing for a momentum-turning charge midway through the third quarter.
Ireland had their noses in front, 20-19, at the end of the first quarter in which Anna Kelly hit a couple of huge bombs from three-point range, but Norway also found their rhythm from that distance in the second quarter and by half-time the sides were level 37-all.
Upon the resumption, Ireland struggled to convert some hard work and good drives into actual points, and with just 2.36 left in the third quarter were trailing 52-44, but typically, they rallied to cut the deficit to just four at the end of the quarter, 54-50.
It was a similar story in the final quarter. Midway through Norway went into a 60-54 lead but three terrific baskets inside, two from an inspired Scally, drew Ireland level, 60-60 with 4.01 to go, forcing Norway to call a timeout. And that’s how it went for the rest of the game. When Norway hit two consecutive baskets to go 65-60 ahead, Ireland, who were supported by the new ambassador to Norway, Keith McBean, responded superbly, with Kelly and Dwyer coming up with monster buckets to bring it back to 65-64.
Dwyer then intercepted a Norwegian pass at the top of the key but in her attempt to secure possession of the loose ball was harshly called for a foul which put Norway on the line who duly sank the two resultant free throws. But Dwyer didn’t relent and hit that heroic three-pointer to level it again, only for Norway’s Therese Hager scoop a layup in with 0.4 on the clock.
This Irish team though have already shown their capacity to rebound from defeat on this tour, bouncing back from an opening 77-67 defeat against Estonia to beat the same opposition 69-53 the following night in Tallinn.
James Weldon will be hoping for that trend to repeat itself now in Norway, with both sides meeting again tomorrow (Saturday) at 4pm Irish time.

The Ireland senior women made a strong second-half rally before ultimately losing 77-67 to hosts Estonia in Tallinn in the first of four international friendlies they play this week.

In their first game under James Weldon’s stewardship, Ireland struggled in the early stages, trailing 20-7 at the end of the first quarter and 34-15 midway through the second. However, they then seemed to adapt to the higher level of competition, Estonia compete in the European A level, and after making six consecutive defensive stops they had reduced the deficit to 15 by the half, 37-22.

They had especially struggled from the free-throw line in that opening half, shooting a paltry 2-10, but after the break they shot 11-15 from the strip, consistent with their overall improvement.

The two sides will face off again tomorrow at 4:30 pm Irish time at the same venue, which, after their second-half rally, Ireland will face with real optimism. They then play another series of back-to- back games, against Norway in Oslo on Friday and Saturday as part of their preparations for the 2020 European small nations tournament.

The Ireland senior women’s have registered a brilliant away win in Tallinn by defeating Estonia 53-69.
In only the team’s second game under coach James Weldon, the side showed remarkable teamwork to emphatically defeat the host side who operate at the A level of European competition.
Estonia had the edge yesterday (Tuesday) in the first game of a two-game international friendly series, winning 77-67, but Ireland took massive confidence from their second-half performance in that encounter and built on it splendidly here.
Ireland dominated from the start, jumping into an 12-18 lead by the end of the first quarter, and after a remarkable stretch in which they made 10 consecutive defensive stops, they’d stretch their lead to 25-37 by half-time.
They didn’t relent at the start of the third quarter and when newcomer Anna Maguire hit a huge shot just inside the three-point line they had extended their advantage to 19 points, 27-46.
Estonia inevitably made a run to whittle the lead down to 37-48by the end of the third quarter but when Anna Kelly heroically stood for a charge midway through the fourth quarter, Ireland regained the momentum to see out the win.
After losing the rebound count 57-49 yesterday, Ireland won it 52-42 in the return game. Gráinne Dwyer led the way in both rebounds (13) and scoring (17 points) and was brilliantly supported on the boards by Hannah Thornton (five offensive rebounds), Fiona Scally (three offensive) and Cathy Kavanagh who made two huge offensive boards.
The squad now move on to play another two-game series, this time against Norway in Oslo, where they will be boosted by Claire Rockall and Aine McKenna, as part of their preparations for next year’s European small nations tournament.