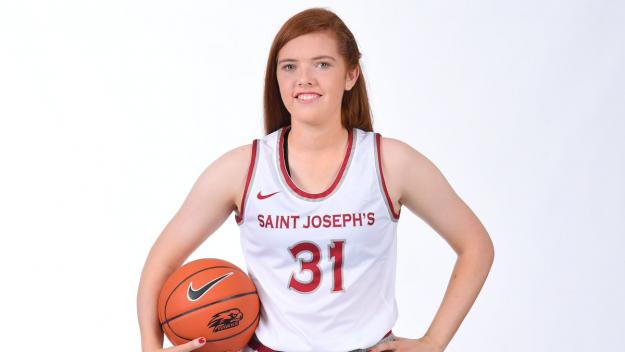 With the Thursday Takeover making a big splash over on our Instagram page (https://www.instagram.com/basketball_ireland/?hl=en) we caught up with Irish star, Claire Melia (who has been making a big name for herself since going abroad) ahead of this weekend’s Hawk Classic. She looks back on her opening games with St Joe’s and talks all things life in America.

Reflecting back on her first game with the University, she stated: “We have been training since July so I couldn’t wait for our first game. Getting to play your first college game in New York City was cool because back home, you were used to playing in Dublin, Cork or Portlaoise. We were all ready to get started on our season. As many of you would know, my parents never missed any of my games at home in Ireland so I knew it was going to be different not going to have them there throughout the game or after the game along with my sisters. I was lucky to have support from other Irish people like Tara McHugh, a friend from home and Glenn Ryan and his son, a great sportsperson from Kildare who were there cheering St. Joe’s on. A past American, Steph Poland, who played with Portlaoise came to the game too. I was so grateful to have them there after the game. It made the win even better having Irish support there! To be honest, I didn’t even think about top scoring in that match after the game. I’m glad our team got a win for our first game on the road. It was good to have the chance to be on the starting five in my first college game, so I was happy with that. Everyone played well that night as a team and that’s how we came out with the win. It was a nice achievement to get Rookie of the Week for my first week of Division 1 basketball in America, but I wouldn’t have got it if I wasn’t surrounded by good teammates and coaching staff.

“Our first home game then, I was lucky to have my sisters at this game to support me. Temple are a team that St.Joe’s haven’t beaten in a few years, so it was time to go out and get a win. The atmosphere was unbelievable - from the band to the cheerleaders to the supporters. It was a great atmosphere for a first home game. This game was also a Big 5 game so it was even better to get a win. Temple were a lot more physical than Columbia. They were more athletic too so it was a completely different team of players. I don’t think about any stats when I play or after I play. I just try my best in games, do what the coaches say and whatever happens that works out well for me is a bonus. Every game is different. I wouldn’t have been top scorer in these games if my teammates didn’t give me good passes to allow me to score.”

Comparing the standard in America to her international experience, she continued: “Each day we train for three hours which was a big change from Ireland because you might only train that much a week at home. The standard here is very similar to the European Championships tournaments - just with a longer shot clock! Every game is different because you get different styles of players. I think that playing against Americans at home since I was 16 has helped me, because there are similar players out here as to who played in Ireland. There are a lot of Irish players that are as good as American players too at home, so getting the chance to play against older Irish players at a young age helped me too. One big difference is that they liked to play more structured out here and use more offences towards in Ireland you can play more freely. Most players out here can do everything, so you must be better on defence.

The support from home has also been key for Melia: “It’s unreal seeing all the support from at home. I am so grateful and appreciative of it because it is tough being away from home, so knowing that so many people are following is nice. Thank you to everyone for all the messages and to all who are supporting myself and St. Joe’s. Our next game is the Hawk Classic, which is November 30th and December 1st. This is played in our college. Most of our games are streamed on ESPN+."