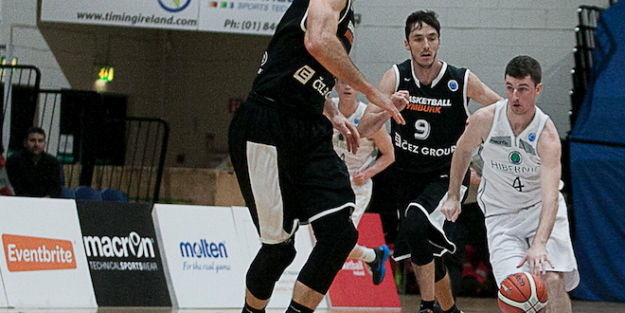 Hibernia Basketball rounded out their FIBA Europe Cup campaign with a 121-45 defeat at home to CEZ Nymburk. The Czech heavyweights were widely expected to finish the Group Phase with a flourish and their strength-in-depth, deft passing and unerring accuracy proved an exhibition for the crowd.

Hibernia Player Coach Colin OâReilly felt the result was inconsequential to the wider objectives of a project designed to give Irish players more exposure to elite basketball.

âWe didnât know what we had out there until we played these games,â he said after facing a side littered with NBA and EuroBasket experience. âI think itâs been huge for the younger generation. Now they know what they have to do. You can already see how they discuss and analyse basketball and hold themselves accountable to their clubs has changed. That can only be a positive thing.â The Hibernia team on the floor in the final quarter had an average age of just 22.

In the FIBA Europe Cupâs maiden year, all 56 teams who entered went into the Group Phase. Hibernia were one of four teams who failed to secure a win.

âItâs important to realise in the bigger scheme of things that these results werenât the be all and end all,â he continued. âIn three of the six games, we were within ten points in the fourth quarter against full-time pro guys. We have no-one professional on our squad. The long-term objectives should be about bridging that gap without forcing guys to give up their day jobs. I think itâs achievable.â

It was a case of Mission Accomplished for Nymburk's former Boston Celtic. "Our Goal today was to advance to the next stage, which we did," said Jiri Welsch. "It was in our ability to win the group but unfortunately we lost two tight games against Bakken. We are happy that we advanced to the second stage of the competition. "

Hibernia Basketball is a combined club side which will compete in the FIBA Europe Cup in 2015. The team is comprised of players from the Basketball Ireland National League.