Ireland U16 Women In France 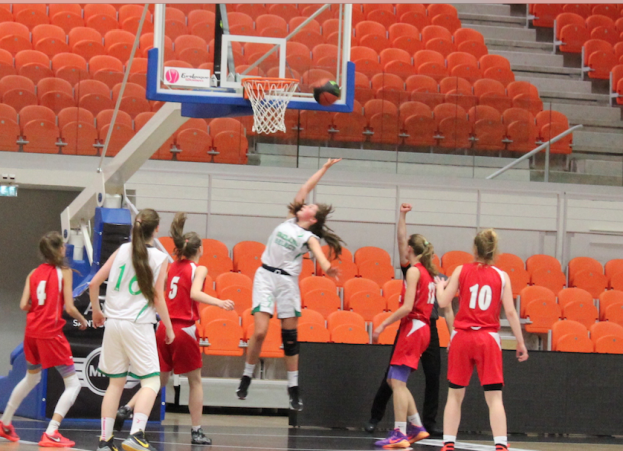 Tournoi Des Demoiselles
Palais des sports du Prado, Bourges, FRA
Dec 18th, 2015:
U16 Women's International: Ireland 61, Poland 55
Report: Karl Kilbride
Ireland were six-point victors over Poland in their first game of the Tournoi Des Demoiselles at the 5,000 seater Palais des sport du Prado in France.
The first five minutes were played at breakneck speed from both teams. Poland took an early lead. Dayna Finn repeatedly got to the basket, drawing fouls and converting to keep Ireland in touch. A big three from captain Bronagh Power Cassidy tied the game and from there there was no looking back. Ireland's relentless full-court pressure was yielding easy scores off steals.
Finn got into early foul trouble but there was only bad news for Poland as Annaliese Murphy came in and proceeded to make their life n absolute misery. Finishing with five steals, five Assists and fingertips on absolutely everything, she controlled the game from start to finish.
The second quarter saw fantastic interior play from both Ella McCloskey and Maeve O Seaghdha, punishing Poland inside for any mistake they made and holding the opposition to just one offensive rebound.
Ireland went in 37-24 up at half time.
The 3rd quarter saw Ireland grow their lead immediately. Maeve Phelan was instrumental, getting to the basket at will. However, it was Nicole Clancy who had the crowd on their feet as she beat her player on the perimeter, euro-stepped around the help defender and finished with a reverse layup in a move that would make any âTop 10 Plays of The Weekâ. More steals from Ireland's full court zone and a dominant performance from Power Cassidy saw Ireland push the lead out to 20 points at the end of the third quarter.
The fourth quarter was back and forth, with Poland initially closing the gap to 14, Ireland pushing it back out to 20 through excellent ball movement and some fantastic scores from Aine Fitzgerald. Ultimately, sloppy play in the last few minutes allowed Poland close the gap to 14 at the final buzzer.
Head Coach Maeve Coleman said: âWe were happy with the performance. The defensive intensity was excellent for the most part. We took our foot off the gas in the 4th quarter which we can't afford to do going forward but everyone worked extremely hard and we were exhausted coming off the floor. Some very encouraging signs along with lots to work on before we play two very strong teams (France North and France South) over the next 2 days.
Ireland U16 Women: Dayna Finn (7), Bronagh Power Cassidy (15), Nicole Clancy (4), Maeve O Seaghdha (8), Ella McCloskey (8). Substitutes: Enya Maguire (2), Alison Blaney (4), Lynn Tunnah (4), Maeve Phelan (8), Aine Fitzgerald (5), Simone O'Shea (0), Annaliese Murphy (0)
Sat Dec 19th:
France South U16 Women 76, Ireland U16 Women 71
Ireland were beaten in overtime by France South in their second game at the Tournoi Des Demoiselles in France. The eventual tournament winners opened with a 15-0 run before the introduction of Maeve Cannon helped recovered to 20-10 after the end of the first.
Ireland narrowed the gap to just 32-28 at half time and through strong performances from Maeve Phelan and Dayna Finn had taken the lead 51-47 heading into the final quarter. The efforts to come back were taking their toll however. France South levelled it at 66-66 by the end of regulation.
Ireland U16 Women Top Scorers: Dayna Finn 19, Maeve Phelan 14, Maeve Cannon 12, Ella McCloskey 7.
Sun Dec 20th:
France North U16 Women 52, Ireland U16 Women 48
France North led from start to finish as a tiring Irish side were beaten 52-48 in their final game at the 2015 Tournoi Des Demoiselles. Head Coach Maeve Coleman said: âTiredness and a lack of discipline led to a lot of sloppy turnovers. We were overawed by the size of the French team in the first half.â
Still there was a kick in the Irish side as an 11-point deficit at the end of the third quarter was reduced to single digits down the stretch. âWe came out with much more fight and aggression,â said Coleman.
Ireland U16 Women Top Scorers: Dayna Finn 15, Maeve OâSeaghdha 9, Maeve Cannon 8, Bronagh Power Cassidy 4.