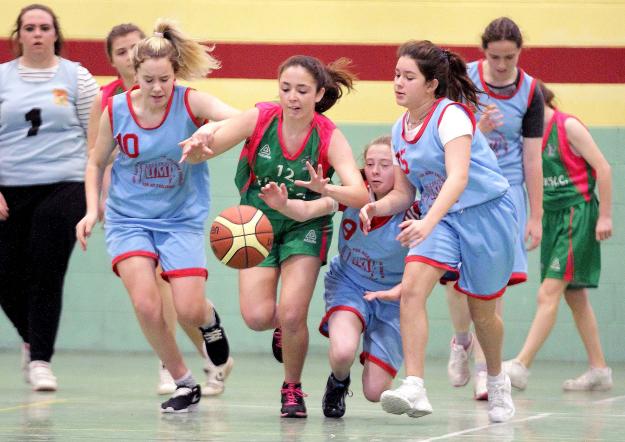 December 2015
The finals of the WIT South East Schools Girls finals took place in Waterford in December 2015.
Click here for some images from the games.
Reports by Tommy O'Mahony
U16 D Final
St. Pauls Community College v Vocational School New Ross
The game got off to a slow start with Vocational school finding it hard to find their range and St. Pauls managing 4 points. Vocational School came back to the game in the second quarter with Sandra Murphy opening up their scoring. At half time the score was 4-8. St. Paulsâ Irena Marguez was one of the main instigators of her teamâs win playing some solid defence and being a constant threat on offence.  Vocational School had a great comeback with Sandra Murphy and Natalie Bradley both scoring and brought the game to 12-13 but St Pauls were not going to be beaten with Marguez scoring a final basket
Final Score: St. Pauls Community College 15, Vocational School New Ross 12
U19 C Final
Our Lady of Lourdes v Presentation Ballingary
Rachel OâBrien opened the game with a fine shot for Ballingary but after this both teams failed to find the target as some good defence was been played by both teams. Ballingary upped the tempo through Aoibhe OâShea stealing the ball and scoring open lay-ups which gave her side a 14 7 half time lead. New Ross had to up their game if they were to stay in this one and they duly answered the call bring the 3rd quarter score to 20-20. Rachel Fitzgerald gave our lady of Lourdes to the lead and it was nip and tuck all the way to the final buzzer.  Ballingarry could notregain the upper hand and losing out on a score line of
Final Score: Our Lady of Lourdes 30, Ballingarry 28
U16 B Final
Scoil Ruain v Pres De Le Salle Bagnelstown
Helen Roche for Bagnelstown opened up the game with a great shot. But this was followed by some great finishes from Meibh Maher, the quarter ended 10-4 to Scoil Ruain. Scoil Ruainâs Sophie Ryan got in on the action which allowed her team to lead 16 8 at the half. The 3rd quarter was more of the same with Scoil Ruain dominating but failing to convert many well worked moves. Maher was a star player contributing 19 points for her team
Final Score: Scoil Ruain 29, Pres Bagnesltown 16
U19 B Final
Scoil Ruain v Pres De Le Salle Bagnelstown
Pres got off to a great start with Danielle OâNeill scoring the first  two baskets and had the lead 6-0 within the first minute. Pres caught Scoil Ruain off guard with their fast break and finished the half 14 36  . Great effort was given by Scoil Ruain with baskets from Lousie Nolan but they couldnât quite catch up.   OâNeill was once again to the fore finishing the game on in style for Bagnesltown
Final Score: Pres De Le Salle Bagnelstown 52, Scoil Ruain 20
U16 C Final
Bridegetown v St. Brigidâs Callan
St Bigids Callan started like a whirlwind leading frim the back in the form of Claire Quigley and Molly Walsh. Bridgetownâs Rebecca Burke lead the comeback with some great moves inside to get her side some hope but they had no answer to Callan Emily Hughes you finished the game with high score of 25 points
Final Score: St.Brigids Callan 41, Bridgetown 20