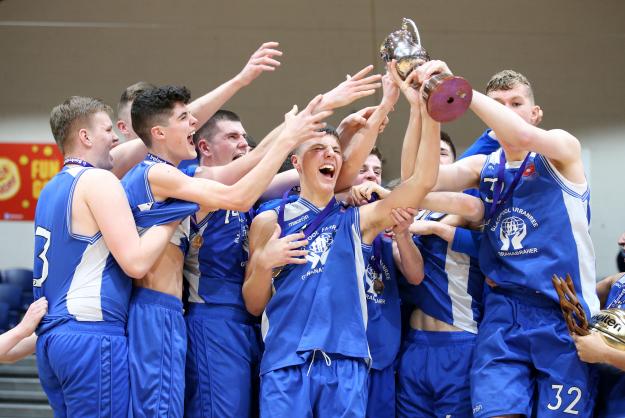 Saturday, 30th January, 2016
Hula Hoops Under 18 Menâs National Cup Final
BFG Neptune 87, Moycullen BC 70
BFG Neptune were crowned Hula Hoops Under 18 Menâs National Cup champions this afternoon after a determined and tenacious win over Moycullen BC.
âItâs brilliant, they were outstanding, a great bunch of kids, they came to training every single week without fail and they deserve every second of this,â said Tom OâSullivan, BFG Neptune Head Coach.
âI couldnât be happier for them, they are the best bunch of kids Iâve ever come across. This is a huge day for Neptune.â

Indeed, long before the game had even started it was already teed up to be a fantastic match, following on from two cracking semi-finals down in Cork that saw each team book their spot in the final by just two points, and it certainly exceeded all expectations, delivering excitement, action and drama right up until the final buzzer.
For the winners, it was Sean Jenkins and Cian Heaphy who were the two stand-out stars on the day, inspiring their team forward with every step.
It wasnât all easy for the Cork team though, as it was Moycullen who had the better of the opening exchanges, with Connor Curran getting the scoring underway with a fantastic three-pointer from the top of the key that certainly laid the marker for an exciting game ahead. Further well-timed scoring from John Hackett, Ladmy Sila and Brian Garvey sent the Galway side into a 25-19 lead going into the second.
However, the break had done Neptune the world of good and they quickly regrouped and soon made the second quarter their own. The hugely impressive Cian Heaphy and an on-form David Murray were the difference between the sides, driving for basket after basket, and despite good play from Eoghan Kelly and Max Brennan at the other end, Neptune had the lead at the break, 42-36.
It was officially game on as the second half got underway, with Curran getting Moycullen straight back on the scoring, and with brilliant play from Sila and John Hackett, they were soon back to within just one point to keep the game on tenterhooks.
However, Neptune had had a taste of that winning feeling and were not going to let their lead go that easily. Superb play from Jenkins and Adam Drummond was augmented further when Cian Heaphy reappeared on the court and Neptune headed into the last with an 11-point lead.
Neptune kept the pressure on right through the last quarter, with Jenkins and Heaphy again to the fore, and despite Curran and Hackett pushing Moycullen on with heart and determination, it was to be Neptuneâs day as they ran out 87-70 winners.
BFG Neptune: Adam Drummond 21, Adam Heaphy 5, Conor OâSullivan 2, Sean Jenkins 23, Daniel Maguire 4. Substitutes: Scott Hannigan, Darragh OâSullivan, David Murray 13, Mateus Kuchno, Cian Heaphy 19, Liam Chandler, Alex Chandler, Rory Kenny, James Hannigan.
Moycullen BC: John Hackett 25, Eoghan Kelly 8, Ladmy Sila 5, James Lyons, Connor Curran 23. Substitutes: Dara Heffernan, Brian Garvey 2, Max Brennan 2, Evan Somers, Lorcan OâMordha, Ronan Clancy, Mark Convery 5, Thomas Hackett.
MVP: Sean Jenkins
Half Time: BFG Neptune 42, Moycullen BC 36