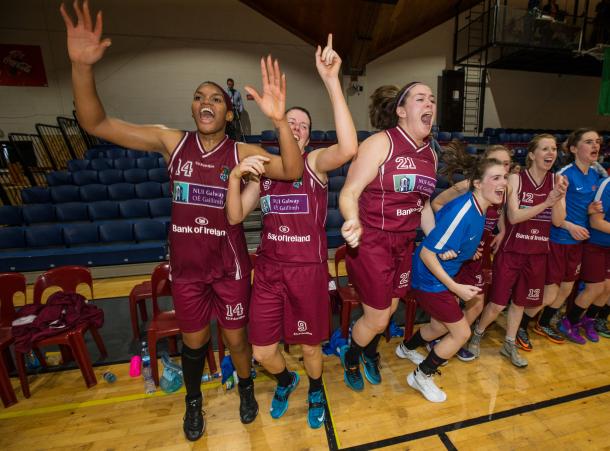 C&S UCC Demons claimed back-to-back Menâs Premier League titles with a 99-87 win over Templeogue at the Mardyke Arena. Colin OâReillyâs side endured a strong start from the visitors but powered through with a combined 56 points from Kyle Hosford and Lehmon Colbert.
âIt was our best performance of the year on our biggest occasion of the year, coming off a 12-point comeback with four minutes to go against Thunder last night,â said OâReilly. âIt summed up what weâre all about and what the players have committed to over the last three seasons.â
The win puts the Cork club alongside Killester in second place on the all-time list with eight league wins. For Templeogue it was the end of a bid to add the league title to their maiden win in the National Cup.
Coach Mark Keenan said: âWe were a bit unfortunate with injuries and the double game this weekend didnât help, but we can be proud of the cup and look forward to the playoffs.â
The night before C&S UCC Demons scored 17 points in the last three minutes for a 90-85 comeback win at GCD Swords Thunder. Good runs in the second and fourth quarters looked to put Thunder on their way before a mix of team and technical fouls let Demons haul themselves back from the free-throw line. Colin O'Reilly's side made their last 8/8 from four different players to ice the win.
Templeogue had lost crucial ground with two games to go as they were beaten 95-92 by UL Eagles in Limerick. Eagles opened with a 14-0 run and were full value for their win with a mix of gritty defence and big shots at key times. Templeogue were rocked by the loss of Jason Killeen just minutes before tip off with a back injury.
Pyrobel Killester remain poised to capitalise on any further slip ups in the teams ahead of them. They beat Eanna 79-58 as Jermaine Turner continued his scoring form with Patrick O'Sullivan and Ciaran Roe combining for 25 points.
UCD Marian locked up fourth place and the last spot in the Champions Trophy by beating DCU Saints 88-77 in Belfield. Elsewhere, SSE Airtricity Moycullen won 76-74 away at Belfast Star.

NUIG Mystics are Champions of Womenâs Division One. The Galway side beat Fr Mathews to complete the league and cup double with a 19-1 record in the regular season.

NUIG Mystics are Women's Division One Champions for the 2015/2016. The Galway side came away with a 67-64 win from title rivals Fr Mathews to wrap up the title with a game to spare, but they were pushed hard all the way. After a solid first half, Mike Murray's side had to withstand a comeback but eventually secured the league and cup double with the playoffs still to come. Mystics were with their trophy after a 59-51 win at home to Ulster Rockets on Sunday.
Longford Falcons came agonisingly close to their maiden win, eventually being edged out 64-62 by ITC Basketball.
Fr Mathews guaranteed themselves second place in the table with a 64-50 win over Team Garvey's Tralee while Oblate Dynamos made sure of fourth spot in beating Marble City Hawks in Kilkenny.
Team Montenotte Hotel secured second place in the Women's Premier League, and with it a home semi-final playoff, courtesy of an 85-65 win over Meteors. The sides were on par in the second quarter until a 13-2 run from the home side put them in the driving seat.
UL Huskies relegation fate is out of their hands. The Limerick side's defeat to Maxol WIT Wildcats means that Portlaoise Panthers can avoid the drop with victory over Courtyard Liffey Celtics on Monday. Wildcats were already assured of fifth place and a play-off quarter final berth.
Pyrobel Killester secured third place with an 89-65 win at champions DCU Mercy.
In the Men's Division One, Team Kilkenny pulled off a 25 point swing to beat Keane's SuperValu Killorglin 99-88 at the Watershed. Killorglin's shot at the title is now over as both Maree and KUBS picked up wins. KUBS came from behind to beat Fr Mathews to keep their hopes alive. Maree were 78-55 winners at home to ITC Basketball and will wrap up the title if they can beat JM&L Auctioneers Titans in the Galway derby next week.
Kestrels moved off the bottom of the table with a 79-71 win at home to Titans.
The Cork derby went the way of C&S Blue Demons. It was the last one for BFG Neptune's Ger Noonan but the Mardyke side secured the win with a late surge.
Friday 26th February 2016:
Womens Division One:
Fr Mathews 64 NUIG Mystics 67
Hula Hoops Women's U18 National Shield:
Pyrobel Killester 43 v Moycullen BC 76
Saturday 27th February 2016:
Mens Premier League:
Eanna BC 58, Pyrobel Killester 79
GCD Swords Thunder 85, C&S UCC Demons 90
Belfast Star 74, SSE Airtricity Moycullen 76
UCD Marian 88, DCU Saints 77
UL Eagles 95, Templeogue 92
Womens Premier League:
Team Montenotte Hotel 85, Meteors 65
Maxol WIT Wildcats 69, UL Huskies 56
Mens Division One:
Kestrels 79, JM&L Auctioneers Titans 71
Team Kilkenny 99, Keanes Supervalu Killorglin 88
Fr Mathews 68, KUBS 80
Maree 78, ITC Basketball 55
Womens Division One:
Longford Falcons 62, ITC Basketball 64
Fr Mathewâs 64, Team Garveys Tralee 50
Marble City Hawks 33, Oblate Dynamos 64
Hula Hoops Women's U18 National Shield:
Glanmire Ladies 70 v Tralee Imperials 46