home / She Got Game

You are here: Home/ She Got Game 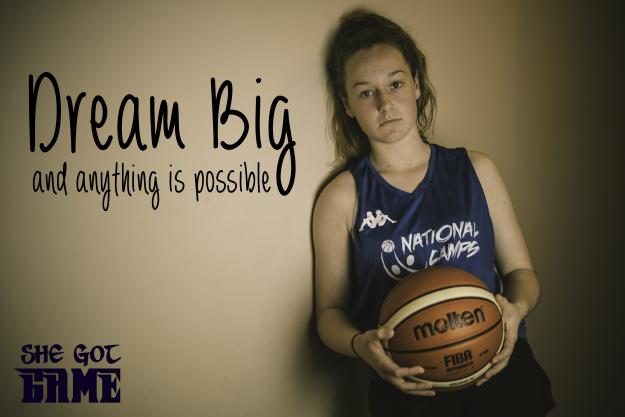 Dream big… and anything is possible

Basketball Ireland has officially launched the ‘She Got Game’ women in sport marketing and participation campaign.

The first stage of the campaign is aimed at 13-17 year olds, and hopes to stop this age group from dropping out of sport.

The campaign was launched on International Women’s Day, 2020, and the launch video tracks the journey of young basketball player, Ruth O’Brien, and her journey through school and life as a basketball player. For this element of the campaign, Basketball Ireland’s tag line is “Dream big… and anything is possible” as the video tracks Ruth from training to school to watching her hero, Irish international star, Grainne Dwyer.

This stage of the campaign will culminate in a big ‘She Got Game’ day at the National Basketball Arena in Tallaght on May 2nd (to be confirmed due to current COVID-19 restrictions). The day at the Arena will see girls from 13-17 years of age come to Dublin to take part in a camp with some of the top female coaches in the country for the first part of the day. After lunch, these girls will then get the opportunity to learn from sports psychologists and nutritionists, and also learn from women about the career pathways open to them in Irish basketball – from playing at elite level, to officiating, to coaching, to working in administration.

The campaign will continue to roll out throughout 2020, with target groups for each stage including female coaches, officials and players coming back to the game.

This ties in with Basketball Ireland’s 20x20 pledge, which saw the governing body commit to increasing the number of female coaches in Ireland.

The first stage of this roll-out is currently underway, as BI is asking all females involved in Irish basketball to take part in our survey around coaching and development.

You can take the survey here: https://www.surveymonkey.com/r/736DRS7