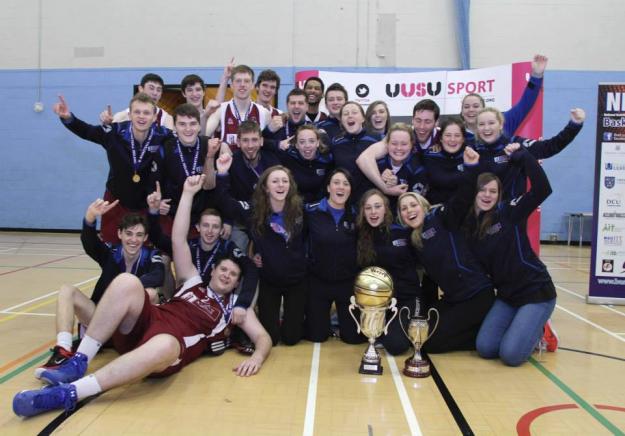 GAMEZONE: Basketball Intervarsities 2016
All games will be uploaded to the NBCC's YouTube Channel.
Men's 'A' Intervarsities Final 2016:
NUI Galway 76, Griffith College Dublin 75
April 3rd, 2016
NUIG edged out Griffith College Dublin in a thrilling final of the Menâs âAâ Intervarsities Tournament in Galway. They came through 76-75 to retain their title when the result could have gone either way in the last ten seconds. Griffith had the last shot of the game to snatch the win but were left to rue some missed opportunities in a frenetic final quarter. MVP Corey Starkey claimed the winning point from the free-throw line, even if an attempt to keep the ball in play on the second free-throw didnât go to plan.
The first quarter was one of the most even of the finals with the sides reacquainting themselves with each other after contesting the Division One League Final in March. Juan Ferrales looked irresistible with a 10 point quarter for GCD and with Alex Dolenko chipping in from the perimeter, Dave Bakerâs side led 22-19 for the first quarter. NUIG werenât far behind as Starkey had 13 points in the first and Joseph Tummon threatening inside.
GCD started with five players from GCD Swords Thunderâs Menâs Premier League side and Mike Garrow and Kaylim Noel proved lethal in the second quarter. Garrow fed Noel inside for a two-handed dunk and then picked off a three-pointer to put 11 points between the sides. Tomas Mitkus was penetrating well for NUIG but it wasnât enough to prevent GCDâs 45-32 advantage at the half.
NUIG started to pick up some momentum in the middle of the third quarter with a sizeable home crowd getting involved. Patrick Lyons punished a foul on his three-point attempt with three successful free-throws to give his side a 56-55 lead with 10 minutes to go.
GCDâs response at the start of the fourth was a 6-0 run through Ferrales and Dolenko. Dolenko also put in an acrobatic block on Stephen OâBrien but there was little he could do about OâBrienâs back-to-back three-pointers that gave NUIG their biggest lead of the game at four points.
Some cheap turnovers gave GCD parity in the dying seconds but it wasnât to be against a side with the hunger to match their support.
âNUIG Coach Paul OâBrien said: âThe lads worked so hard to get back in the game after being 12 points down at half time. Once they did, they had the confidence to finish it out and Iâm so proud of them. Theyâre all local lads and theyâre all great lads to coach. Hats off to Griffith College as well. Weâve played them in two tough finals this year.â
NUIG: Stephen OâBrien 10, Joseph Tummon 10, Tomas Mitkus 13, Patrick Lyons 5, Corey Starkey 37. Substitutes: Rory Gilson, Ryan Murray, Joe Henry, Ronan OâSullivan, Sean Condon, Kyle Cunningham 1, Martin McAndrew.
GCD: Juan Ferrales 18, Mike Garrow 14, Sergi Marti Guardia 12, Kaylim Noel, Alex Dolenko. Substitutes: Abdul Mikael, Cholo Buenaventura, Wei Hay, Adam Lowell, Josh Behnke, Vilius Korotkovas 3.
HT: GCD 45, NUIG 32.
MVP: Corey Starkey (NUIG)

Women's 'A' Intervarsities Final 2016:
Waterford Institute of Technology 68, Trinity College Dublin 44
April 3rd, 2016
WIT completed a remarkable year in winning the Womenâs âAâ Intervarsities title for the very first time with a 68-44 win over Trinity College Dublin. It was a second trophy in the space of a month for Jim Dudleyâs side as they added to the League title won at the National Basketball Arena. Trinity came into the game as defending champions but lost their grip on the game courtesy of a stunning third quarter from the Munster side.
WIT got off to a flying start through Yvonne Corcoranâs and Marie Micoudâs free-throws to forge a 10-2 lead. Trinity didnât kick into gear until Emily Leerâs fadeaway over Jazmen Booth but trailed just 16-14 by the end of the first period.
There was nothing between the sides in the second quarter. Laura Hoffman was the only surviving member from Trinityâs first ever Intervarsity title in 2015 and her basket looked to put the Dubliners ahead at the break but Jazmen Booneâs late steal and layup left it 30-29 for WIT.
WIT took over in the third quarter. Hoffman picked off a couple of baskets but Trinity were kept to just eight points in the period with WIT running up 24 points and a double digit lead. Jazmen Boone was at the heart of it with 13 points in the quarter while Cliona Mairtin hit her second three-pointer. It gave Trinity too much of a mountain to climb and ensured a new name would be engraved on the Intervarsities trophy in 2016.
With the result beyond doubt, the game petered out somewhat in the final quarter. Not that it took any of the sheen of WITâs win. Winning Coach Jim Dudley said: âThey were working us really hard so we brought Cliona Mairtin in so that whenever Emily Leer turned, Cliona was there waiting for her. Weâre quick in transition and got away with three or four uncontested layups. We play nice basketball and we did the job.â
WIT: Yvonne Corcoran 7, Jazmen Boone 26, Katie Fox 12, Marie Micoud 15, Cliona Mairtin 6. Substitutes: Rachel Taheny, Chloe Morrisey, Jane Crowley, Laura Heffernan, Ciara Twomey 2, Claire Manning, Aoife Brett. Coach: Jim Dudley. Assistant Coach: Helena Rohan
TCD: Aoife Tiernan 3, Meghan McGuinness 8, Ali Thornbury 5, Laura Hoffmann 6, Emily Leer 18. Substitutes: Danielle Kilduff, Rebekah Dempsey 2, Claire McGregor 2. Coach: Andy Gill
HT: WIT 30, TCD 29
MVP: Jazmen Boone (WIT)

Womenâs âBâ Intervarsities Final 2016
University of Limerick 59, IT Carlow 56
April 3rd, 2016
UL claimed the Womenâs âBâ Intervarsities title for 2016 with a 59-56 win over IT Carlow in Galway. In a game where the lead changed hands throughout, the decisive moment came with two minutes left when Sarah Benedetti turned two points into five with an opportunistic three-pointer. Benedetti made a contested layup and earned a trip to the line for the bonus, only to see her free-throw rebound to Orlaith Woods who kicked the ball out to the American for the open three.
IT Carlow were unable to free up Lilian McCabe for the leveller, after her 32 points had helped the League champions challenge for a first varsities trophy.
The Carlow side led 8-2 early on before UL crept into contention with and took the lead in transition through Benedettiâs first three-pointer. With the sides deadlocked 24-24 at the break, the majority of the third quarter was spent swapping a one-point lead until a block by MVP Orlaith Woods sparked a run to put UL 42-37 clear.
IT Carlow were determined to atone for losing to UL in the group stages and were back in front midway through the fourth. That left time for Benedettiâs intervention for a side who were disappointed not to be playing at âAâ standard in 2016.
âWe played good enough on defence, we werenât rewarding ourselves offensively but in the end we pulled it through. They had to go out and show they were good enough to play âAâ standard and they did. Itâs great to see.
UL: Jayne Marsden 8, Orlaith Woods 11, Kelly Tyner 2, Ciara OâHalloran, Sarah Benedetti 24. Substitutes: Lynsey Parnell, Mary Harte 2, Maebh Barry 8, Fiona OâConnell, Gillian Coombes, Niamh Hannan, Shannon Keane 4. Coach: Andrew Dawson.
IT Carlow: Sarah Cooper 2, Alana Savage 3, Ciara McCarthy 2, Shannen Holbrook 5, Lillian McCabe 32. Substitutes: Hannah Fitzpatrick, Ann Marie Molyneaux, Nicole Kelly, Rachel Briggs 3, Alienor Raimbault 9, Rosalyn Odujebe. Coach: Martin Conroy. Assistant Coach: Elaine Kennington.
HT: UL 24, IT Carlow 24
MVP: Orlaith Woods (UL)