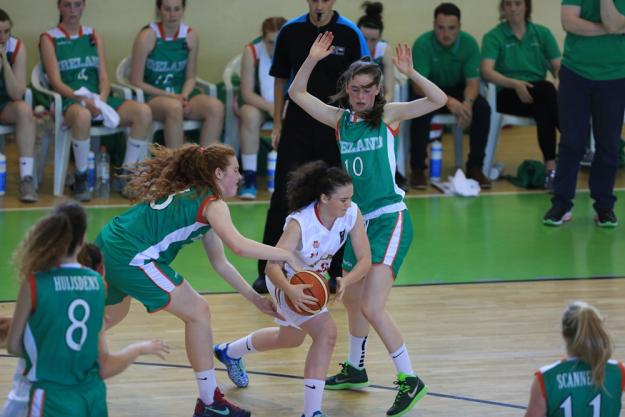 A FEROCIOUS third-quarter run gave Ireland the sweetest of victories against the old enemy in their European Championship opener in Sarajevo on Saturday afternoon.

The Irish ladies showed composure, team work and an insatiable appetite for rebounds that, first, wore England down then simply blew them away.

The teams had gone in at the break locked together on 32 points in a ding-dong Group C battle.

But the ladies in green stormed into the lead after the turnaround, outscoring England 22-7 in the third period and setting the foundation for a fantastic victory.

The Irish bench came up huge in this one, with Aine McDonagh coming in to pocket 14 points and Saoirse Power-Cassidy rattling home 15 of her own as both girls took 11 shots each.

Claire Melia was Ireland's third girl in double figures on the day. The Portlaoise Panther had 12 points (4/7 from the field) and would also pull down 12 rebounds to give her a double-dozen as she dominated both ends of the floor.

The Irish controlled the boards at either end, with McDonagh, Catherine Connaire and Rachel Huijsdens also getting in some work on the glass.

Moycullen's Connaire also played the role of facilitator, finding her open team-mates with three assists as the Irish scored from all angles.

England, on the other hand, were simply no match for the Irish ladies in the rebounding stakes and finished with just one player in double figures - the impressive Harriet Swindells collected a game-high 16.

A beaming Anna Maguire (6pts, 3/5 from field) could not hide her delight afterwards, the team captain told Basketball Ireland: "We were a bit panicky at the start, it was just the usual nerves with this being our first European game.

"But it's always great playing England and we finally settled into it. It was in the third quarter that we really pulled away.

"The main thing is we stuck together and showed energy and really played as a team and that made us carry it through til the end."

The Irish team won't have too much time to celebrate this eye-catching result. Attentions turn immediately to their second game of the tournament against Greece on Sunday afternoon (3.15 Irish time), giving them barely a one-day turnaround.