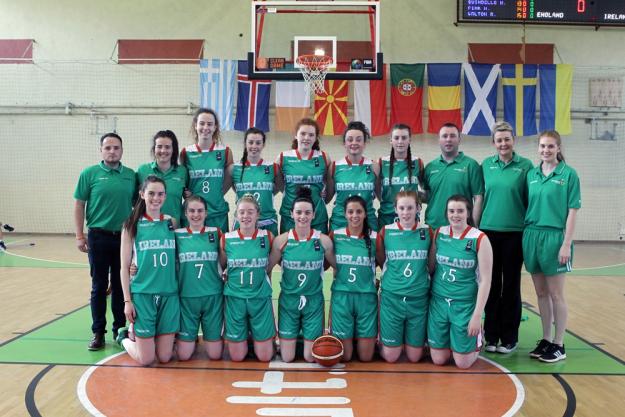 As the group stages of the 2016 U-18 Women's European Championship Division B wrapped up Wednesday, the Ireland Women faced a must win against Estonia with second place in Group C and a trip to the quarter-finals on the line.

There were no signs that the Irish were phased by the pressure as they put on an impressive display, cruising past the Estonians 65-46. Claire Melia continued her outstanding performance this tournament as she lead the way with 20 points, 8 rebounds and 3 steals.

A scrappy start marked the opening minutes of the match, taking almost four minutes before the first field goal was registered, with Ireland's dominant defence and steady free throw shooting building an early 10-0 lead. Melia's 14 points set the pace offensively as Ireland ended the quarter ahead 18-6, holding Estonia to 18.75% shooting.

While the second quarter was a much tighter affair, Ireland were able to push their lead to 16 going into the half. The Irish defending continued to set the tone, racking up 8 steals and forcing 14 turnovers over the first two quarters.

The Irish women continued their trend of dominant third quarters as they tore into the second half with a 14-4 run, pushing their lead beyond 20. The third period has been Ireland's consistently strongest throughout the group stage, outscoring their opposition 76-39 over four matches.

As victory was very much ensured, most of the Irish starters played sparingly in the fourth, with an eye towards Friday's quarter final. Overall it was one of the Women's strongest defensive displays of the tournament, holding Estonia to 31% shooting while forcing 27 turnovers and registering 15 steals.

With a matchup against Sweden on the cards, the Irish U-18's will be facing their toughest challenge so far in this tournament, but on the tail of two dominating performances against Macedonia and Estonia, along with two closely fought affairs with Greece and England, teams considered superior on paper to the Irish, the women will be entering the knockout stages with as much confidence and momentum as any of their contemporaries in Europe.