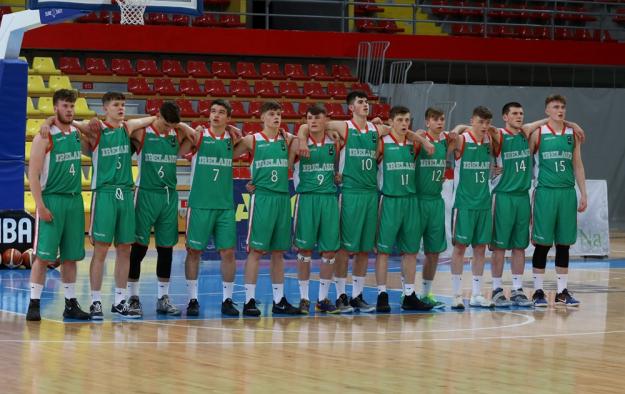 With the u18 girls competing in their European quarter-final at the same time it could have been easy to forget that the u18 men tipped off their European adventure tonight in Skopje with a tough opening game versus Cyprus.

It was a close game in the fourth with only 2 points separating the sides with 30 seconds remaining on the clock but a close finish looked a long way off in the first as Ireland got off to a disastrous start, Cyprus rushing into a 13-0 lead before Tariq Guebaili registered Irelandâs first score. Once Ireland were on the scoreboard and they saw that first shot go through the rim it seemed to have a settling effect as the experience Adam Drummond and Eoin Rockall would also get their names on the scoresheet and cut the Cyprus lead to 7 points. Cyprus then started to heat up and it looked like the game might get out of sight when Evzonas made a huge three pointer to give the Cypriots an 18 point first quarter lead but Ireland rallied as Donal Ring hit a huge three of his own and Eoin Rockall got to the line time and time again to narrow the gap to a much more manageable 7 points at the end of the first.

The second and third quarters would see both sides go basket for basket and battle it out but Ireland could never quite put that run together to see them over the hump and close in to the Cyprus lead. Robert Sullivan was in fine form for Ireland and a constant thorn in Cyprus side on his way to a game high 15 points.

Cyprus finished the third on a 6-2 run which put them up 58-47 and it didnât look good for the Irish going into the fourth but an intense defensive effort had them put together an impressive 12-0 run to see them take their first lead of the game with 3.30 left on the clock, 59-58. However this lead was short lived as Andreou made Cyprusâ first basket of the quarter as he sank a three to regain the lead for his side. A tense end to the game was in store as both sides made key defensive stops and hit big shots, none more so that Drummond who made it a 2 point game with only 30 seconds to go. The famous luck of the Irish deserted the boys in green in the last minute with some shots that looked destined to go in rolling off the rim and they fell to a 67-61 defeat.

The Irish boys did well to battle their way back into the game but experience international coach Joey Boylan will know you cannot give up an early 18 point lead and expect to win at this level. Next up for Ireland is a game vs host country Macedonia tomorrow.