DAY TWO: Another tough day in Belarus for Ireland U16 squads 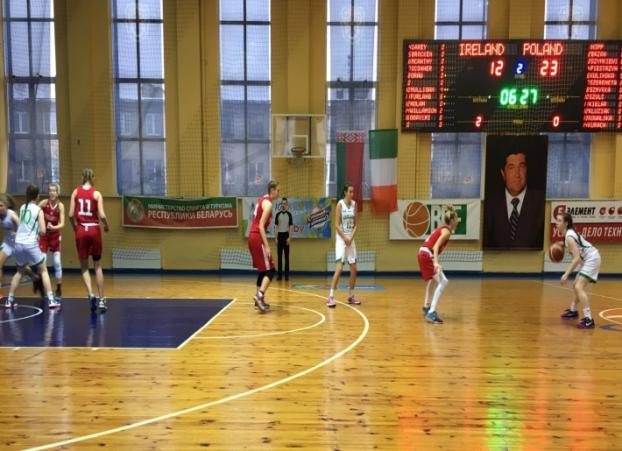 It was another tough day on the court for the two Irish Under 16 squads today, as they both battled it out against Poland.

Ireland’s U16 men’s team fell to a 69-48 point defeat earlier today, in a bruising, physical battle at the Ryzenkov Cup in Minsk, Belarus.

In a game that featured 52 fouls, Ireland trailed 22-15 after the first quarter, with Paul Kelly influential throughout. The lead stretched to 11 at the half, with the Irish playing much more cohesive basketball than their performance against Belarus on Friday.

Poland's defence in the third quarter was stifling however, and Ireland managed a mere three points in the quarter, thus putting the game effectively out of reach. Feisty play in the 4th quarter saw Ireland outscore Poland 18-11 in the quarter, but the damage was done and Poland ran out 69-48 winners.

Ireland's final test of the tournament comes Sunday vs Division A power Lithuania.

Once again, a fast start from Ireland saw them lead 9-5 with early scores from Katie Williamson, Ciara Bracken and two big threes from Mia Furlong. The quarter ended 17-12 to Poland. A repeat of yesterday's second quarter woes saw Poland step up their pressure defence with Ireland guilty of forced turnovers, which ensured Poland outscored Ireland 15-5 leaving the half time score 32-17.

As the third quarter wore on, Ireland went down by 35 but then showed excellent resilience to lose the half by just 6. Alex Mulligan, Katie Williamson, Lainey Nolan and Debbie Ogayemi worked tirelessly inside with Alex scoring 9 points and Katie pulling down 11 rebounds. Lauren Darcy grabbed four last quarter points with Laura McCarthy and Niamh O'Connor adding further scores. Edel O'Raw added solid defence, but Ireland could not bridge the half time deficit.

36 turnovers and 34 points conceded as a result told the tale.

Andy Gill, Ireland Under 16 Women’s Head Coach commented: “We had a fast start which was encouraging. However, Poland stepped up big time in the second quarter and we could not cope with their defensive intensity. You don't win games at this level conceding 36 turnovers. On the plus side, they really turned it around from the middle of the third quarter outscoring Poland 23-15. We are learning all the time and I have no doubt the benefits of this defeat outweigh any negatives.”