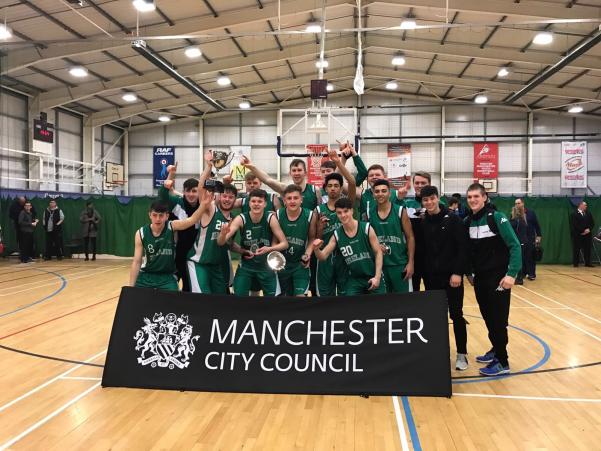 “I’m completely overwhelmed,” were the first words Ireland Under 18 Head Coach, Conor James said this evening, as his side overcame Worcester Academy, USA, 103-91 in the final of the Haris Tournament in Manchester to be crowned tournament champions.

“I’ve never seen anything like the way the lads played today before in my life – it was brilliant,” he continued.

Indeed, it’s been a glorious journey for the squad the last two days as, following on from an opening round loss against Derby Trailblazers in the tournament, they went on to beat England and Sligo All-Stars in the remaining two group games to top Group B and book themselves a spot in the semi-final earlier today against Edinburgh.

“The win against England was unbelievable yesterday – we were the underdogs,” James reflected. “We knew they were going to come out and think they could walk over us, but we had more talent and played to our strengths and they weren’t able to stop us, so we gave them a bit of a rude awakening I think."

Indeed, the semi-final today was not for the faint hearted either, as Ireland won out by just one point over Edinburgh in the end (79-78) following a nail-biter to get through to the final.

“To go on from that win over England then and beat Edinburgh in the semi-final earlier today, that was a nerve-wracking game as there was only one point in it," James continued. "We had big motivation for the final. These lads are by far the most talented group of lads here. They ran so hard, they attacked hard, they put everything into it and were pretty good at their free throws in the final too, which got us over the line. Sean [Jenkins] got MVP of the tournament, which was brilliant, and Adam Drummond got an All Star so it just goes to show how much these lads impressed,” he added.

“Getting to work with them has been brilliant. The one thing that we as a coaching staff said is that these guys have put 12 years of hard work and training in to get them this far, so it was up to us to guide them that bit more of the way and offer them advise, but really, they are a fantastic squad and hard work has paid off.”