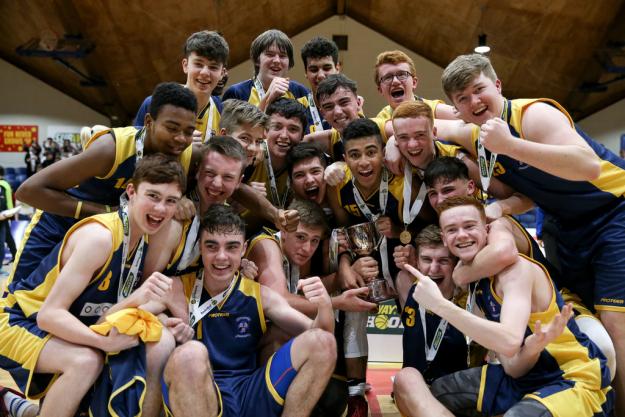 Larkin Community College and Blackrock College served up an absolutely nerve-wracking SUBWAY Under 19 C B Schools Cup final in the National Basketball Arena in Tallaght this morning, with Blackrock just doing enough to win out by four in the end.

There were superb performances at both ends of the court, with Jiahui Ren, John Iamoste and Jiahuang Ren some of the standout stars for Larkin, while MVP Seán Lardner drove Blackrock forward with style along with Roberto Brusasca, Rhys Hennessy and Rob Somers.

Larkin came out in the first quarter the fastest, running the break well and driving insides for some lay-ups as Blackrock struggled to find their feet to seen them into an 11-4 lead at the first buzzer.

Blackrock hit their strides in the second though and  soon had the game back to within just one point, with Lardner and Rob Somers leading the scoring. A three-pointer just before the buzzer from Andrzej Bobko kept Larkin in the lead by four at the half time break (20-16).

A tense third and fourth quarter saw the control of the game change on a numerous occasions. Rhys Hennessey tied the game on 26 apiece with just over three minutes to play in the third, and a three-pointer from Lardner put them in the lead. Larkin brought the game back to a tie from the free throw line, and added some nice baskets on to take the lead going into the last, 36-29.

Blackrock were determined though, and their grit paid off and at the start of the fourth, got straight back onto the scoring, with Hennessy, Lardner and Karl Conroy all netting vital scores to reclaim the lead once more midway through. Despite the best efforts of Jiahui Ren and Jiahung Ren for Larkin, Blackrock managed to hold firm, and Lardner and Brusasca rounded off the scoring in style to win by four in the end.

There was just six seconds left on the clock when the ball landed in the hands of Sandra Keane for Castlerea Community School. Just six seconds on the clock, and her team were down by two and as the ball was inbounded from the baseline, she made no hesitation in laying it up neatly to send the game to overtime.

That basket from Keane was just one of many crucial scores netted by the MVP of the game, in what was an absolutely superb SUBWAY U16 C Girls final.

It was obvious from the start that this was going to be a close game, as while Killiney had a 6-11 lead at the end of the first, momentum was swinging in favour of Castlerea to ensure an exciting second quarter.

The second quarter and indeed, the remainder of the game was certainly thrilling, as superb displays from Killiney’s Hannah Murphy and Lisa O’Rourke and Keane of Castlerea saw the balance of power tip from side to side on numerous occasions and there was just one point in it going in at half time, 16-15 in favour of Castlerea.

The tension mounted as the third quarter got underway, as O’Rourke got proceedings underway with a three-pointer, but determined defence from Holy Child helped to set up Kate Hogan inside for a great score to put them back in the lead 20-21 with four minutes to play in the third. Again, Keane took control at the other end and with Laura Fannon and Holly Hopkins adding baskets saw the game all square once more 26-26 going into the last.

Determination and nerves of steel were the name of the game in the final quarter, with Maria Hurtado Romero netting a vital basket for Killiney midway and Hannah Rourke adding six points.

When Siobhan Fitzgerald drove through the Castlerea defence to score, it looked like Killiney had it won (36-34) but Sandra Keane had other ideas and cooly put the ball up to send the match to overtime. Overtime was another tense affair, but Castlerea had the momentum now and key steals from Keane and good rebounding by O’Rourke set them up for important scores at the other end to win 45-40 in the end.

ST JOSEPH’S Charlestown marched to glory in the Subway U19 C Girls Schools Cup final this afternoon as a fantastic display of skill on both offence and defence saw them win out over Colaiste Ide an Daingean by 11 points.

MVP Kellee Crean netted 16 points for her side on the day, and had numerous assists to ensure that her team were crowned winners on the day. Colaiste Ide came out strongest in the first quarter, with Ciara Ní Shé and Brianna Ní Bhroinn working the ball well around the key to get some nice scores for the Kerry team to lead 5-9 at the break.

A more settled St Joseph’s side came out after the short break between quarters though, and Crean began to showcase her skills more, getting in well under the basket for rebounds and scoring five points. Hannah Burke was also key for the Charlestown side in this quarter and did enough to see them into a 17-14 lead at half time.

Crean really took control in the third quarter opening it with a bang, and adding eight points in total, with Elisha Duffy also adding scores to keep her team in front. Colaiste Ide were not going down without a fight though, and Soomi Ní Dhúláin, Ni Shé and Mollie Ní Cheallaigh kept the scores coming as the clock ticked down to leave it 27-23 in favour of St Joseph’s going into the last.

Whatever was said to St Joseph’s at the start of the fourth quarter obviously worked though as they came out strong in the last quarter, keeping Colaiste Ide to just two points in the quarter and adding a further nine points themselves to win well in the end, 36-25.

Deep 2 from the corner just before the end of the half St Joe's Charlestown 17 Colaiste Ide an Daingean 14 #SubwaySchools pic.twitter.com/hhWYUGvJz1

A STAR-STUDDED cast of players lined out on the court of the National Basketball Arena in Tallaght this afternoon for the hugely anticipated clash between St Mary’s Diocesan School, Drogheda and Coláiste an Phiarsaigh Glanmire in the SUBWAY Under 19 B Boys Schools Cup final.

St Mary’s had a strong line up with Cormac and Padraig McGroggan, Josh Coleman and Padraig Nulty all proving to be key players in their win over the Cork side this afternoon, with Padraig McGroggan picking off some superb three-pointers throughout the game to bag himself 29 points in total.

A fantastic display from BFG Neptune star Cian Heaphy at the other end saw him net 30 points for the Cork team, and he pulled off some fantastic blocks and rebounds on the boards to keep his side well in it throughout.

A tight and competitive first quarter saw the sides stay neck in neck,  as Josh Coleman showed his skill on the drive, netting six early points for Drogheda, while Heaphy and Jack O Cionnaith were on hand to net some big scores for Glanmire to give them a lead of one (11-12) going into the second.

The second quarter was where a lot of the damage was done by St Mary’s though, as they secured 25 points to Glanmire’s 7 in this quarter, with Padraig McGroggan, Nulty and Coleman bagging all of the baskets to send them into a comfortable 36-19 point lead at half time despite the best efforts of Heaphy and Conchúir Ó Ferghail.

Glanmire came back into it in the third quarter, outscoring the Drogheda team by three in the end, but the second quarter hammering was still being felt as a gap of 14 points (48-34) stil haunted them going into the last.  Padraig McGroggan kept a steady hand on the helm of the St Mary’s offence as the fourth quarter got underway, and good scoring from Canaan Tsabary, Shane O’Connor, Nulty and McGroggan kept them in the lead to win comfortably, 64-45 in the end after an incredible display from both sides of the promising young talent in Irish basketball.