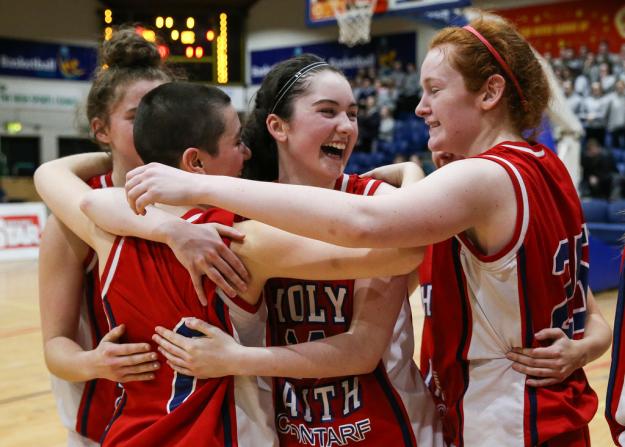 SUBWAY All Ireland U19 A Girls Schools Cup final:

SUBWAY All Ireland U16 A Boys Schools Cup final:

SUBWAY All Ireland U16 A Girls Schools Cup final:

SUBWAY All Ireland U19 A Boys Schools Cup final:

Under 19 A Girls Final

Holy Faith Clontarf drove home to victory in style in the SUBWAY School Under 19 A Girls Cup final this morning as they overcame Dunshaughlin Community College 46-75.

Jerome Westbrook’s charges were a star-studded line-up of who’s who on the Irish underage international scene, and a superb MVP performance from Ali Connolly coupled with the depth on their bench (which allowed Westbrooks to sub in five for five on most occasions) saw them just have that bit too much for a spirited and determined Dunshaughlin side.

The first quarter was a brilliant showcase of skills, as Holy Faith failed to get to grips with the height and power of Rachel Huijsdens who netted 10 points in quick succession to keep her team neck-in-neck with Clontarf the whole way through. Just one point separated the sides on most occasions, with Ruth Fennell, Ali Connolly and Mae Creane keeping the scores ticking in for Holy Faith to finish 14-15.

Westbrooks changed it up once more in the second quarter, and put a full court press on Dunshaughlin that worked exactly as he had planned. A superb performance from Connolly and Bronagh Power Cassidy on offence, and Maeve O Seaghdha and Deborah Sealy on defence, saw them outscore Dunshaughlin by 26 points in the quarter, bringing the half time score to 19-46 and the damage was done.

The third and fourth quarters were much closer, with Huijsdens, Kelly O’Dwyer and Sadhbh O Muiri running the ball well for Dunshaughlin and Niamh Curtin getting some good scores under the boards. Connolly, Elizabeth Black, Ciara Curran and Niamh Kenny kept things running for Holy Faith, and outscored Dunshaughlin by just four in the third. A strong fourth quarter from a determined Dunshaughlin saw them out score Holy Faith for the first time in the game, as their never say die attitude brought them right up to the final buzzer with their heads held high, on a final score of 46-75.

ST JOSEPH’S of Galway had 10 points to spare over St Malachy’s College, Belfast, in an hotly-contested SUBWAY Under 16 A Boys Schools All Ireland Cup final this afternoon at the National Basketball Arena, with Aaron Kiernan and James Connaire the real force behind the win.

Indeed, Kiernan – who was awarded MVP of the game – was valuable on both offence and defence, bagging himself nine points in total, but setting his teammates up for other vital scores to see them home to glory in the face of a comeback from St Malachy’s College.

The Bish had the best of the opening exchanges, with Connaire netting seven points in the quarter for the Galway team to drive them into a 13-4 lead going into the second quarter. St Malachy’s began to find their feet though, and Cormac O’Rourke showed off his shooting talents to close the gap on the scoring and see just five in it at the break for half time, 22-17.

The comeback was well and truly on by the third quarter, as with six minutes to play, Conn Doherty bagged a well-taken jump shot to put just one between the sides and as the clock ticked down, Jack Summersgill landed a fantastic three-pointer to tie the game level on 24 points apiece. The Bish showed their grit though and instead of panicking in the face of such pressure, calmly slowed the game down, with Dara McNulty adding a vital basket to push them ahead once more, but the game still hung on a knife edge at the end of the third, 29-26 to The Bish.

The Galway school came out strongly once more in the fourth quarter though, and took their coach’s words on the sideline to heart as they worked every minute of the quarter to keep Malachy’s at bay. Again, Kiernan and Connaire were crucial, with McNulty tapping in some much-needed scores and James Cummins and Iarlaith O Sullivan also on hand to drive to the basket. Good displays from Cormac O’Rourke at the other end – to see him net 18 points overall for Malachy’s – were just not enough and The Bish held firm to run out 10-point winners in the end, 52-42.

Scoil Chriost Ri Portlaoise stormed home to a fantastic 38-45 point victory this afternoon in the SUBWAY Under 16 A All Ireland Schools Cup final, overcoming Crescent College Comprehensive in an extremely close and very competitive final at the National Basketball Arena in Tallaght.

MVP Shauna Dooley and the hugely impressive Ciara Byrne controlled the game for Portlaoise, and met the challenge of Crescent College at every step to ensure the Laois school drove home to win.

A close opening quarter showed just how evenly-matched these two teams are, as Amy Byrne and Jasmine Burke of Portlaoise got the scoring underway early, but Laura Stapleton and Eve Nealon were not letting them in easy and fought back just as hard under the boards to leave it 10-11 in favour of Portlaoise going into the second quarter.

The second quarter was just as close and tense, with Portlaoise taking a five point lead early on but again, Crescent Comprehensive fought back with Nealon pulling off a superb jump shot under pressure to tie the game on 17 apiece with just over a minute to play until half time, and Stapleton added two great baskets to put them in the lead 21-19 going into the third.

The third quarter was well and truly the Ciara Byrne show as, with fantastic assists from Dooley and Burke, Byrne drove to the net for four baskets in-a-row to put a gap back between them on the scoring. Sarah Fleming was crucial in this quarter too for Portlaoise and their hard work paid off as they out scored Crescent College 5-14 to leave it 26-33 going into the last.

Portlaoise now had the Cup in their sights and they certainly weren’t letting go if it quickly and as Crescent College once more launched a comeback driven by Laura Stapleton and Nealon, they held firm to win out 38-45 in the end.

ST AIDAN’S CBS defended their SUBWAY Schools Under 19 A title in style this evening, coming back from a 14-point deficit at half time to drive on and win by 12 points in the end.

The last game of the SUBWAY Schools Cup finals proved to be a fascinating match up once more as, in a repeat of last year’s Cup final, reigning Cup champions St Aidan’s faced Francis O’Sullivan’s charges from Ballincollig, who were League champions last season.

Brian Ashton was one of the many stars for St Aidan’s today, and was the driving force behind their third quarter comeback, with the extremely talented Matt Treacy on side to help net some vital scores. A bright start from Ballincollig saw them open up a four point lead at the end of the first (19-15) with good scores from Conor O’Sullivan and Dylan Corkery keeping the pressure on St Aidan’s.

Momentum stayed with Ballincollig in a scrappy second quarter, as they added another 19 points to their tally, with Darragh O’Sullivan, Conor O’Sullivan and Corkery proving to be key for the Cork side. Brian Ashton and Treacy were on hand for St Aidan’s to try and stem the tide of the Cork attack, but Ballincollig maintained control, taking a 38-24 point lead in to the dressing room at half time.

A revitalized St Aidan’s emerged after the break, with Matt Treacy quickly closing the gap with some well-taken shots and all of a sudden, it was game on once more. Aidan’s continued to shoot in style, with six three-pointers reducing the lead to just two points, before Emmet Lawless put the crowd on its feet by giving St Aidan’s the lead with two minutes on the clock in quarter three. They continued to pressure Ballincollig and outscored them by 29 points to six in the end to take a 49-53 point lead into the final quarter.

With the supporters well and truly in a frenzy of excitement, the fourth quarter unfolded at pace once more, and Ballincollig were dealt another blow when Ciaran O’Sullivan picked up his fifth foul of the game.  Ashton, Lawless, Cameron McCormack and Treacy were happy to continue to knock the scores in for St Aidan’s, while Darragh O’Sullivan and Jack Murphy worked hard for scores for Ballincollig, but the third quarter had taken its toll, and time ran out for Ballincollig as St Aidan’s were crowned Under 19 A Boys champions once more.