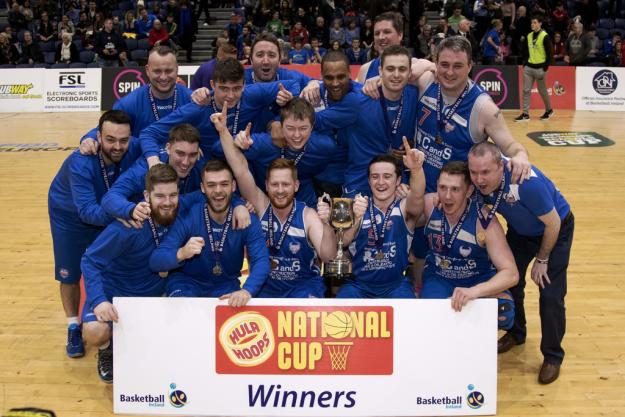 A ruthless fast break and the sharp shooting of Jason Kennedy ensured NI Knights raised the Hula Hoops IWA National Cup for the first time with an 80-51 win over Fr Mathews at the National Basketball Arena.

Fr Mathews opened the scoring through good work from Adam O’Neill before Kennedy got Knights’ primary weapon up and running. The player coach had five assists in the first quarter alone including a tee-up for Conn Nagle to drive to the elbow and set the northerners on a 9-0 run.

Paul Ryan leant back in his chair to create an opening and snap the streak for Mathews while Derek Hegarty put in a massive shift under both baskets. The cost was three fouls in ten minutes but the overall contribution included two baskets in the low post and a crucial stop on another Kennedy pass over the top.

Conn Nagle was at the scoring end of Knights’ superb transition and helped himself to nine points for the period and his side to a 19-11 lead.

Knight’s cushion aside, there was little to separate the sides in the second quarter. Adam O’Neill banked in a long two and Hegarty followed up with a steal to reduce the gap to 10 points. The Corkmen’s shooting stats were creeping up but NI Knights consistently made the right choices to shoot at 55%.

The only three-point attempt of the first half came on the buzzer for half time and it graced the net to give Knights a 43-28 advantage. Kennedy was the man who let fly to hit the 20 point mark in 20 minutes of basketball.

Dylan McCarthy got things going for Fr. Mathews in the third. Adam O’Neill followed up and the Knights needed to beef up their defence to maintain control. Martin McGrath got the stop they needed while Nagle’s speed and timing for the outlet pass left him uncatchable.

Jack Quinn’s crisp passing and Alan Dineen’s combativeness weren’t enough to offset the accuracy of Jason Kennedy - He was on 31 points before he allowed himself a breather. Fr Mathews by no means looked a beaten docket but foul trouble forced Hegarty and O’Neill to be cautious and the efforts of keeping pace with Nagle were taking their toll.

This was Knights’ night.

A TIGHT and competitive Men’s NICC final saw Blue Demons hold firm to finally take the spoils after a thrilling fourth quarter finish that saw the sides neck-in-neck right up to the final buzzer.

Indeed, it was a close and tight game throughout, and quarter one saw UCD Marian in the lead, with Mark Ryan netting 14 points in style early on and Shane Egan adding to their tally with 10 well-taken points in a fast-paced and lively quarter. Demons weren’t too far behind though, with a big spread of scoring and good rebounding from Luke O’Mahony seeing it end 21-27 to UCD at the end of the first.

The second quarter was just as close, with Shane McCarthy and Niall O’Reilly proving crucial for Blue Demons, keeping UCD to under 10 points for the quarter to drive into the lead, with Shane Coughlan also adding points. Good defence by Demons saw them take the lead and went on to have the advantage 44-36 at half time.

A stronger third quarter display from UCD brought them right back into it, with Shane Egan and Ryan proving crucial at both ends of the court, while Luke O’Mahony, Shane Coughlan and Shane McCarthy were core for Blue Demons to help to maintain their lead in the face of a good UCD hustle, to see just six in it going into the last, 62-56 in favour of Demons.

A fantastic fourth quarter had fans on the edge of their seats as just five point separated the sides for most of the quarter. UCD tried to close the gap on numerous occasions with Shane Egan and Mark Ryan working hard to keep the scores coming in and Demons out but Coughlan, O’Reilly, McCarthy and Ryan Murphy proved just too much.

MAREE BASKETBALL CLUB proved too strong for Limerick Celtics as they cruised to victory in the Hula Hoops Women’s National Intermediate Cup Competition Final.
Maree were led by 25 points and 10 rebounds from Dayna Finn, as well as 10 points and a staggering 20 rebounds from Michelle Fahy.

It was Maree who got the better of the opening exchanges as Limerick Celtics struggled to take advantage of their opportunities to score. Maree used fast breaks to their own advantage and all their starting five players picked up scores in the first quarter. Limerick Celtics’ Megan Cardarelli scored three consecutive baskets to reduce Maree’s lead at the end of the quarter; 12-18.

Both teams made a slow start to the second quarter as a lot of defensive stops were made. Limerick Celtics were able to effectively get back on defence to stop the Maree fast break that happened so often. Maree’s Dayna Finn picked up some lovely scores as she was able to manoeuvre her way through Celtics’ zone. Maree began to pull away towards the end of the half as they took full advantage of the free-throws they earned. Halftime score: Limerick Celtics 21-38 Maree BC.

Celtics and Maree traded scores at the beginning of the second half. Celtics’ Nadine Rice picked up a couple of scores to try and swing momentum to the Munster side. Dayna Finn, however, had other ideas as she answered right back with some scores of her own, including a lovely and-one. Celtics’ Michelle Aspell and Maree’s Michelle Fahy both started to come into their own as they both picked up scores for their teams towards the end of the quarter, where the score was 34-55 in favour of Maree.

Maree star Dayna Finn scored her team’s first five points of the final quarter and also acted as playmaker for others. Limerick Celtics attacked valiantly but the women from Galway were just too strong and hot-handed on the day, cruising to victory on a scoreline of 42-71.