Hula Hoops Cup Finals Gamezone: U18 and U20 Men & Women

Hula Hoops Cup Finals Gamezone: U18 and U20 Men & Women 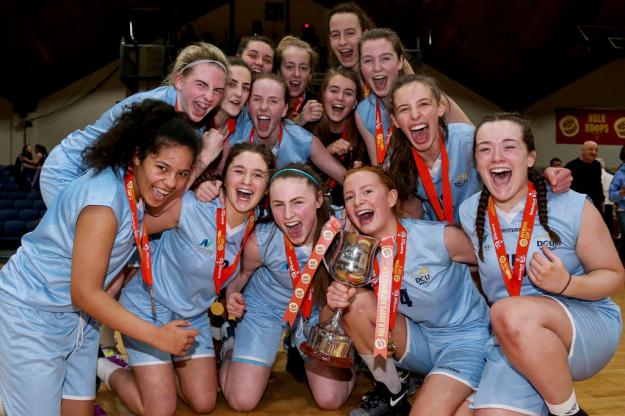 BFG Neptune retained their Hula Hoops U18 Men’s Cup title despite a battling performance from KUBS with a 90-73 win at the National Basketball Arena. Eoin McCann’s 37 points kept the Dubliners in touch for long periods but a disciplined cohesive performance proved Paul Kelleher’s side to be worthy champions with the MVP award going to Cian Heaphy.

Sean Jenkins showed his prowess inside and out in the opening exchanges for an 11-point quarter. KUBS saw no need to hit the panic button and Donal McKay calmly stroked home a three-point opener with Jordan Fallon strong under the basket. Eoin McCann needed all of his athleticism to go hard and add the extras, but for all KUBS’ toil they were still 28-17 down for the first period.

BFG Neptune were punishing every turnover that came their way and they had the better of the open looks with Cian Heaphy draining his first three-point attempt.

Neptune went to their bench in the second quarter for some extra zip from the Hannigan twins and Robert Cahill netting one from the top of the key. Conor Ennis came in for KUBS while McCann notched a double-double with some bullish offence and strong work on the boards.

The Cork men were still ultra-efficient and their zone defence looked imposing until the hot hands of Jordan Fallon changed the momentum of the game. His perimeter shooting brought the crowd to their feet and a 12-0 run reeled in Neptune’s 18 point lead to a two-possession game.

It looked telling that the last basket of the half went to Sean Jenkins for a 50-42 lead, but KUBS burst into the third quarter with a 5-0 run. The noise only switched back to the blue half of the crowd when Cian Heaphy made a three that sparked the defending champions back into life. Jenkins, Murray and Drummond combined on the rest of the 11-0 run. KUBS hung in there with stirring resolve to trail 69-57 for the final stanza.

Ultimately it was BFG Neptune’s strength in depth and cup winning knowhow that won them the day. They had 19 points off the bench from with nine players scoring and Liam Chandler’s monster dunk early in the fourth left the crowd in no doubt that the Cup was returning to Cork.

BRONAGH POWER-CASSIDY was the shining star as she lead DCU Mercy to victory in the Hula Hoops Under 18 Women’s National Cup Final. Power-Cassidy finished with an astonishing 28 points and 12 rebounds in what turned out to be a one-sided affair in the National Basketball Arena.

DCU Mercy got us underway in the first game of the day at the Arena. Good defensive play in the opening possessions lead to multiple scores for DCU, with Deborah Sealy and Bronagh Power-Cassidy leading the way. Louise Scannell made some scores on the fast break for Glanmire but it was Power-Cassidy who put on a show in the first quarter, going a perfect 6-6 from the field to have 14 points and have DCU up 25-12.

Both teams struggled to pick up scores until midway through the second quarter.

DCU Mercy had the best of the opening exchanges in the third quarter with Rachel Hujisdens and Elizabeth Black both getting scores from offensive rebounds. Hujisdens performed especially well on the offensive boards and she made life difficult for Glanmire due to her physicality. Glanmire did their best to bring the game back with some good scores but Power-Cassidy and Hujisdens helped DCU maintain their lead towards the end of the third quarter. Maeve O’Seaghdha scored on the buzzer to give DCU a 54-38 lead heading into the final quarter.

Glanmire’s Louise Scannell attacked with ferocity as she lead the fast break, attempting to get much-needed scores for her team. Teamwork was a major factor for DCU as great, fluid ball movement assisted them in pulling away again towards the end of the game. DCU finished the game with nine players on the scoresheet in what was a great team effort. Final score: DCU Mercy 75-47 Ambassador UCC Glanmire.

DCU Mercy secured their second National Cup title in as many days when they powered home to a 42-76 point victory over Pyrobel Killester at the National Basketball Arena in Tallaght.

Nicole Clancy, Aoife Maguire and Bronagh Power-Cassidy were the spark behind an early DCU surge, which saw them press hard early on and blitz Killester. Speedy guard Anna Brennan caused big problems for Killester, forcing turnovers and converting well at the other end. Despite Ash McCann and Ali Connolly settling well for Killester, they just weren’t able to convert their possession into scores and DCU keep the intensity rate high to close out quarter one 10-22 to the good.

Clancy, Power-Cassidy and Maguire kept the scores raining in for DCU as the second quarter got under way, with Rachel Huijsdens moving well inside for them. Ash McCann kept Killester’s scoring ticking over, with Aoife O’Halloran, Maria Long and Ali Cleary working hard on defence for them, but they were trailing at half time 22-43.

Congrats to @dcumercy who have today won the @HulaHoopsIE U20 Women's National Cup final to put with their U18 success! @BballIrl pic.twitter.com/tJNA6YzBcZ

A clinical display from DCU in the second half saw them continue to force turnovers to go on and finish at the other end with crisp passing, summed up time and time again by a full court string of passes to set up a well-taken score to lead 26-61 at the third, and despite an extremely determined and impressive display from Ash McCann, it just wasn’t enough in the face of a polished DCU side, with Aisling O’Driscoll also impressing.

DCU were crowned Hula Hoops Under 20 Women’s Cup champions on a final scoreline of 42-76.

BFG Neptune made history on Sunday afternoon in the National Basketball Arena in Tallaght as they stormed home to their third Hula Hoops National Cup final in as many days following a thrilling 10-point win over KUBS in the Men’s Under 20 final.

Indeed this afternoon’s game was simply the icing on the cake for a team that has been dazzling spectators in the Arena all weekend. First, they overcame KUBS in the Under 18 final on Friday night, before going on to overcome Ej Sligo All-Stars in a nail-biting President’s Cup final on Saturday evening and today, it was three from three as the side – powered by an MVP performance from Adam Drummond – stormed home to glory.

As expected, the first quarter opened with a thrilling back-and-forth display, culminating in dazzling plays on both ends of the court. Neptune's Cian Heaphy opened his account early, but things heated up when KUBS' Kevin Doran scored back-to-back baskets, first finishing in the key, and following with an aggressive drive to the hoop to keep his side in contention. Marcus Black also shone bright for the Dublin side to tie the sides at 24 apiece going into the second quarter.

There was an outstanding volley of three-point baskets by both sides to open the second quarter, but play loosened up and Neptune's Jenkins and Heaphy took advantage with a barrage of drives to the basket, giving them a 10-point lead at the end of the half. Adam Drummond continued to unleash scores from all over the hardwood, culminating his outstanding play with a break-out dunk, but the roar was heard from Dublin's KUBS who responded ferociously to keep the sides close at the half when Carroll drained a three-pointer with 15 seconds on the clock (56-64).

Neptune again were out of the traps to start the final quarter with clinical displays from stars Drummond and Sean Jenkins but yet again, the KUBS roar could be heard and they clawed the margin back to 8 points—a three score difference. As the quarter closed though, it wasn't enough. The explosive Drummond racked up 31 points to earn him Most Valuable Player honours and Neptune took the final, 75-85.

As the clock ticked down and the cheers rang out around the National Basketball Arena, the story of the weekend was obvious: this Neptune club travelled to Dublin with domination in mind. The Cork club picked up three trophies in three straight finals over the weekend, with the stars mesmerizing in all three.