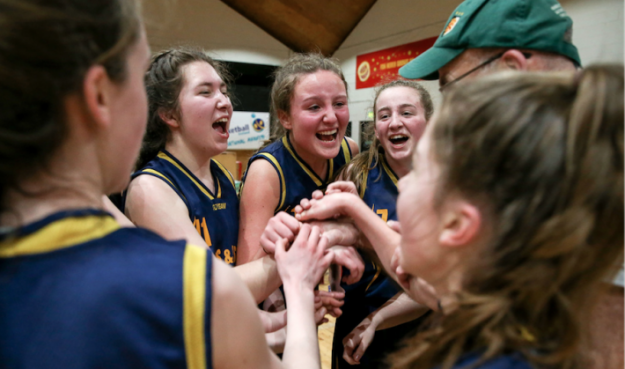 You can view the full schedule here.

All Ireland Schools Under 16 B Boys Final

COLAISTE POBAIL SETANTA rounded off an incredible year of school’s basketball in style this morning, as they overcame Pipers Hill of Naas to be crowned All Ireland Schools League Under 16 B Boys champions.

The win this morning marked the school’s second major title in as many months, after being crowned SUBWAY All Ireland Schools Cup champions back in January with a win over Castleblayney.

Sammi Fajana was the star of the show for the Dublin school, dishing up an incredible MVP performance that saw him net 26 points altogether and a number of assists.

Milosh Kutijevic and Kevin Shea were also some of the stars for the Dublin side, to send them firmly into a 9-15 lead at the end of the first. It wasn’t all one-way traffic though, as Pipers Hill’s  Jack Maguire and Alex Durero loaded the pressure on Setanta in the second quarter, bringing it back within a point midway through. However, Fahana and Adejare Adelani were determined to keep the pace going and finished out quarter two back in front, 24-34.

Pace was the name of the game for the last two quarters, with Colaiste Pobail Setanta proving just why they were crowned Cup champions a few weeks’ ago and they drove home to a 43-57 point win in the end.

All Ireland Schools Under 16 B Girls League Final

The story of the game though is not just the journey that this team has been on under the watchful eye of Eoin Wheeler, but indeed, the commitment, skill and flair that they showcased once more today that saw them in control from the second quarter, as they drove into a lead that they would not relinquish.

Another highlight from the game has to be the performances of Miah Ryan and MVP Gillian Wheeler, who shone the brightest for Kilcullen on the day and show fantastic promise for the future.

Despite a shakey first quarter, that saw the sides finish on 9 apiece, Ryan and Wheeler kicked off a super second quarter display that put their team in the driving seat for the remainder of the game. Isobel Monaghan and Ava Marron chipped for Kilcullen to keep the lead ticking through into the third quarter, and despite an absolutely superb performance from Laney Nolan and Sally Hickey of Scoil Mhuire, Kilcullen were comfortable 48-37 point winners in the end.

IT WAS A BIG DAY for Galway’s Colaiste na Coiribe as they battled hard to secure the All Ireland Schools Under 16 C Boys League title, winnng out by eight over St Mary’s College, Dundalk.

Oisin Ó Gormaile was the shining star of a well-drilled Galway side, who had previously suffered the agonizing loss of the SUBWAY All Ireland Schools Cup final at the same level back in January, losing out by just one point (50-51) to St Vincent’s Castleknock College. They made no mistake this time around, and despite impressive displays from Luke Markey and Thomas Rice of Dundalk, Colaiste na Coiribe had just too much for them.

The westerners drove into a solid lead early on, bringing a four-point cushion into the second quarter after Ó Gormaile and Máirtín Ó Conaighle settled well early on. Cronan Mac an Bhaird proved crucial for the Tribesmen, working hard under the boards all afternoon, while Elijah Faapito, Rice and Markey kept the scores coming through for Dundalk to leave just four in it once more at the half time break, 29-25 in favour of Colaiste na Coiribe.

The third quarter was where the Galway side really hit their stride though, with superb running and scores from Ó Gormaile to stretch the gap on the scoreboard that bit more. Mac an Bhaird and Ó Conaighle also proving to be the difference in the end, as they held firm to run out 50-42 point winners.

CASTLEREA CS made absolutely sure of their Under 16 C Girls League final win this afternoon as they stormed to a comprehensive 39-16 point victory over St Catherine’s VS of Killybegs in the final at the National Basketball Arena.

The Roscommon side won their second All-Ireland title of the year in emphatic fashion, following on from their thrilling Cup final win at the same age group back in January.

Lisa O’ Rourke, Sandra Keane and Holly Hopkins were the driving forces behind a win that showcased the best of underage Irish basketball as they took control early on, leading 10-7 at the end of quarter one, before extending that lead to 22-10 by the end of quarter two.

Killybegs weren’t without their stars either though, with Meabh Dorrian, Orla Caberry and Andrea Furey just some of the shining lights in what was a display of grit, determination and a superb never-say-die attitude.

The fourth quarter was a massive one for the Donegal side as, despite the fact that Castlerea had kept them to just 12 points up until the end of the third quarter, a fantastic display saw Killybegs net a whopping 15 points – more in that quarter than they had scored in the other three. However, it was too little too late for them as time ran out and it was to be Castlerea’s day once more, as Keane, Hopkins and O’Rourke continued to hit the net in style to finish out 40-30 point winners.