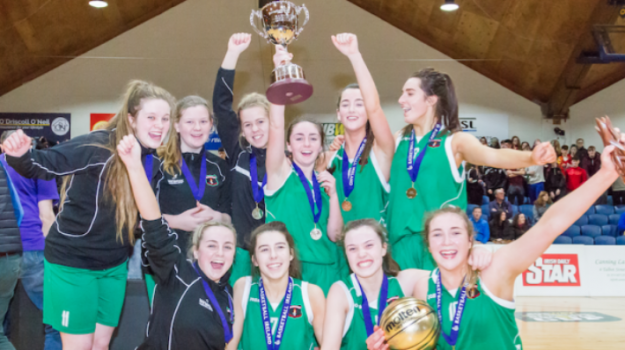 You can view the full schedule here.

All Ireland Schools Under 19 A Girls League final

Sometimes, it’s hard to find words to express a game and this is certainly one of those occasions as Coláiste Chiaráin (Leixlip) and Coláiste an Phiarsaigh (Glanmire) served up one of the best games of basketball this year when they went head-to-head in the Under 19 A Girls League final.

It was a match that had everything – superb defence, well drilled offensive plays, unbelievable three point shooting and brilliant skill. The result was in the balance right up until the last five seconds and there was a sense that overtime could have been on the cards at every turn.

However, it was Glanmire’s day in the end, after an absolutely fantastic performance across the board, but especially from MVP Jayne Fitzgerald and Annaliese Murphy, saw them come from behind in the fourth quarter to win out in style.

Indeed, the balance of power swung over and back throughout the game, as Sorcha Tiernan, Ciara Bracken and Niamh Masterson dazzled for the Kildare team to send them into a half time lead, 33-29. Tiernan and Bracken continued to dominate proceedings in the third quarter, with Meadhbh Hanlon rebounding well for the Leixlip school and despite the superb efforts of Glanmire’s Fitzgerald, Eva Roche, Murphy and Anna Lynch, Coláiste Chiaráin still held a lead at the end of the third – 44-41.

Fans held their breath as the fourth got underway as it was obvious that this was going to be a quarter not to be missed and it certainly didn’t disappoint as a superb three pointer from Ciara Bracken tied the game at 47-47 to put a stop to an early run from Glanmire that saw Lynch, Fitzgerald and Murphy all tipping in for baskets.

A massive three-pointer for Lynch saw Glanmire edge out in front, but the shooting battle continued as Niamh Masterson added a three-pointer and suddenly, the clock was running out and they teams were still level. Lynch added another vital basket for Glanmire and despite a well-taken shot from Hanlon at the other end, free throws made the difference in the end with Murphy and Roche netting all their shots from the line to run out four-point winners in the end.

PSN BALDOYLE stormed home to victory in the All Ireland Schools League Under 19 C Boys basketball finals this afternoon, with a convincing 59-48 point win over St Gerald’s DLS College, Castlebar.

Fantastic performances from MVP Jamie McDonagh and Austin Trimmer were the difference between the two sides, with the pair combining for 45 of their side’s overall 59-point tally in a hugely impressive display.

Shane Scollan and Ethan Gibbons were the driving force behind the Castlebar attack meanwhile and although they added 16 and 11 points respectively, it just wasn’t enough in the face of the well-oiled machine that was Baldoyle.

Indeed, Jermaine Turner’s charges took the lead early on, finishing the end of the first quarter five points to the good (18-13) with McDonagh, Paul Shannon and Trimmer all settling early to get the scores on the board. Quarter two was where they did the most damage though, outscoring the Mayo side by 20 points to seven, with Trimmer and McDonagh dominating on all areas of the court and proving themselves to be an unstoppable force in the face of pressure.

A stronger second half from Castlebar saw them outscore the Dublin side in both the third and the fourth quarters, with Gibbons really shining through. However, the damage had already been down and the mountain was just too insurmountable a climb. McDonagh and Trimmer were determined not to let their lead slide as well and kept the scores raining in to see Baldoyle run out deserving 59-48 point winners.

It was a victory that was all the more sweeter for St Joseph’s Community College of Charlestown Co. Mayo this afternoon, as they made it a double All-Ireland victory this year, winning out by just two points in a nail-biting finale against Coláiste na Toribhirte.

Having secured an 11-point victory in the Cup final back in January over Coláiste Íde an Daingean (Co. Kerry), St Joseph’s were met with a sterner test this afternoon as they faced a well-drilled Cork side.

Indeed, Mark Scannell’s charges were in control of proceedings early on, driving into a 9-3 lead over St Joseph’s with Sinead Dart O Flynn and Niamh McGrath proving to be two pacey players that were hard to get to grips with. The second quarter saw St Joseph’s find their feet a bit more, but Coláiste na Toirbhirte still looked that bit more comfortable at both ends of the court to hold the lead at half time, 13-8.

Quarter three is really where Ann Leydon’s charges found their feet though, as superb running by Chelsea Doherty, Sarah Burke and MVP Kellee Crean soon had the scoreboard ticking over nicely for the Mayo team, and with three minutes left to play in the quarter, Doherty pulled off a superb jump shot to tie the scores on 15 apiece. The Bandon side kept a cool head though, and manage to eke out some more scores to hold a tenous 21-17 lead going into the last, but momentum had slowly started to swing in favour of Charlestown and it was well and truly game on for the fourth quarter.

Good work by Elisha Duffy of St Joseph’s got their last quarter off to a good start, and soon it was back to a draw game as Crean netted another great score to level it at 24 apiece. The game stayed neck-in-neck as the clock ticked down, with Niamh McGrath bagging some crucial scores for Coláiste na Toirbhirte, but in the end, it was from the free throw line where the damage was done, as Charlestown’s last six points came from the line, with Duffy, Hannah Burke, Crean and Doherty all keeping a cool head to net their points and hold onto a vital two-point lead until the final buzzer sounded.

All Ireland Schools League Under 16 A Girls Final

THE JOURNEY home to Kerry may be long, but it will be all the more sweet for Presentation School, Castleisland this evening, as they romped home to a 48-41 victory over Scoil Chriost Ri, Portlaoise.

MVP Kayla O’Connor was the star of the Kingdom’s show, as she drove her side forward from the front, with a massive work rate at both ends of the court to see her nailing 14 points for her side and winning a number of offensive and defensive rebounds.

Indeed, it was a superb team performance all round from Castleisland, with Gemma Kearney, Aine Sheehan, Millie Luck, Brid Moriarty and Joyce O’Connor also working hard throughout the game to ensure that once Presentation went into the lead in the last quarter, they kept a firm grip on it.

A fast-paced first quarter got proceedings underway, as both sides threw everything they had at each other to try and assert dominance over the game’s pace. Portlaoise’s Sarah Fleming, Jasmine Burke and Ciara Byrne worked hardest for them early on, getting the scores in well and setting up some brilliant offensive moves to leave just two between the sides at the end of the first, 12-14 in favour of Portlaoise.

Nothing could separate the sides in the second quarter, as this was a quarter where defence reined supreme, with scores at a premium. Both teams managed to just net five point each before the break to leave it extremely close going into the third quarter.

Castleisland began to take the edge in the third quarter, with Moriarty and Kayla O’Connor really stamping their mark on the game – adding in some crucial scores to give them a two-point lead going into the last. A nail-biting eight minutes ensued, as reigning Cup champions, Portlaoise, tried to get a foothold back on the scoring, but despite a superb display from Fleming and Dooley for Portlaoise, Kearney, O’Connor and Moriarty just had too much for them to run out seven point winners in the end.