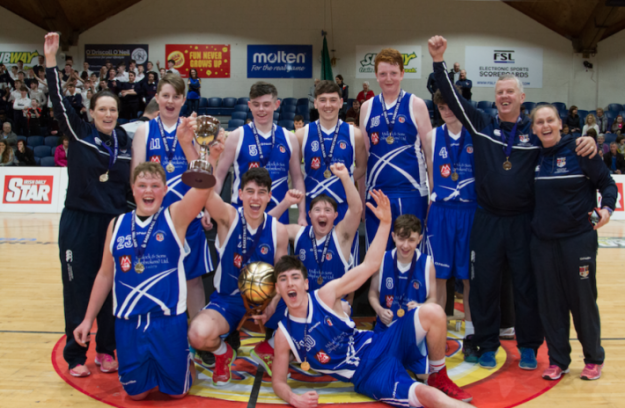 U19 B Girls final

All Ireland Schools League Under 19 B Boys final

THERE WAS heartbreak for SUBWAY All Ireland Under 19 B Schools Cup champions, St Mary’s Diocesan School of Drogheda this morning, as they suffered an agonizing one-point defeat at the death to Crescent College Comprehensive.

Indeed, St Mary’s held the lead (41-40) with just 11 seconds on the clock, but a jump ball call saw possession go to Crescent College and Ronan Cregan somehow managed to get the ball into the net for the Limerick side to win out in heart-stopping fashion.

In truth, it was always going to be a nervy finish as despite Crescent College getting an early 2-8 run midway through quarter one, Padraig McGroggan and Josh Coleman of St Mary’s soon had that gap closed, to leave just two in it at the end of the first, 9-11.

Nathan Moore and Jack Coyne of Crescent College began to shine in the second quarter, as they continued to drive hard at St Mary’s, but McGroggan, Coleman and Shane O’Connor were on-form at the other end as well and sent the Louth team into the lead, 23-20 at half time.

Quarter three saw the game all level again on numerous occasions, with Crescent College just edging ahead ever so slightly at the end, 29-32, teeing up a cracking fourth quarter – and what a quarter it was as, with five minutes to play, St Mary’s had taken a one-point lead once more thanks to Luke Toohey’s focus from the free throw line, and the balance of power swung over and back on numerous occasions before St Mary’s again took the lead with 35 seconds to go. However, the final twist of this tale was yet to come as, with 11 seconds on the clock, jump ball possession went in favour of Crescent College and Ronan Cregan somehow found his way to the basket in the face of a wall of St Mary’s defence to bag the killer blow and send his side to glory by just one point.

All Ireland Schools League Under 19 B Girls final

RACHEL SAWYER was the spark that ignited a superb performance from Presentation De La Salle of Carlow this morning in the Under 19 B Girls All Ireland Schools League final, to see them home to a 39-27 point win over OLSPK of Belfast.

Indeed Sawyer, along with Amy Dooley and Caoimhe O’Neill, were really the unstoppable forces for the Carlow side, and a phenomenal third quarter display – which saw them outscore the Belfast team by 14 points to 3 – was where the damage was done and saw them secure a memorable victory.

A close and nervy first quarter saw good scoring at both ends from Dooley, Aoife Roche, Ciara McCreanor and Louisa Donnelly to leave the score at 9-11 in favour of Our Lady’s at the end of the first.

Scores were at a premium in the second quarter, with both sets of defence getting on top of proceedings to leave Carlow in the lead by just one going in at half-time, 15-14.

De La Salle came out all guns blazing in the third, with Sawyer setting up some superb scores for Dooley and O’Neill, while Niamh Roche bagged some brilliant threes to send them into a more comfortable 29-17 lead going into the last. OLSPK came back into it in the last quarter, with the two McCreanors (Ciara and Muireann) really dazzling for them, but the damage had been done and De La Salle ran out deserving 39-27 point winners.

All Ireland Schools League Under 19 A Boys final

COLAISTE CHOILM Ballincollig broke the 100 point mark in just 32 minutes of playing time today in the Under 19 A Boys All Ireland Schools League final as they romped home to victory in sheer style, with a 102-75 point win over neighbours Presentation Brothers, Cork to secure their second All Ireland League title in-a-row.

It was a game that had absolutely everything – style, flair, skill and a superb showcase of shooting that saw Dylan Corkery net 28 points, Conor O’Sullivan bag 29 and Darragh O’Sullivan scoop 24 points for Ballincollig. It wasn’t just on one end of the court though, with Sean Jenkins bagging a whopping 37 points for Presentation Brothers at the other end – a tally that against other team, would surely have been enough to win coupled with good work from team mates David Murray and Ciaran Fitzgerald. However, against a Ballincollig side who had suffered the crushing disappointment of Cup final loss against St Aidan’s CBS back in January, were back in the Arena to right that wrong and boy did they do it in emphatic manner.

From the off, it was obvious that this was going to be a high-scoring game as the teams fired off shots early on, with Jenkins, Fitzgerald and Davi Scott getting the scores on the board early on for Pres Brothers, while the O’Sullivans and Corkery were just beginning to find their stride to see Colaiste Choilm two up at the end of the first, 11-13.

Quarter two was played at a frantic pace, with Jenkins adding 13 points, but every shot he made was responded to and added to immediately by the hugely impressive O’Sullivans and Dylan Corkery at the other end as they stretched out into a 38-59 point lead going in at half time.

With a huge score already on the board following two eight-minute quarters, fans were gearing up for yet another showcase in the second half and that is exactly what they got as quarter three and four continued in the same vein as the previous two, with three point shooting the name of the game. It was all net for nearly all the shots as Corkery, Conor and Darragh O’Sullivan mounted the pressure up and up, and with a few minutes to go on the clock, finally broke the 100 mark in style with Michael Lynch on target twice in a row to send them home to a memorable victory after a seriously stylish display.

All Ireland Schools League Under 16 A Boys final

ST MALACHY’S COLLEGE of Belfast made it a fantastic double of All Ireland League title wins, as they continued on their superb form of 2016 to bag a 46-34 point win over St Joseph’s (The Bish) of Galway at the National Basketball Arena in Tallaght.

The win was even sweeter for the Belfast team, as they overcame The Bish just over one month after losing to them by ten points in the SUBWAY All Ireland Schools Cup final at the same age group.

CJ Fulton and Conn Doherty were the driving forces behind St Malachy’s win today, as they covered every board on the court to ensure victory for their side. A close and competitive first quarter saw it all square on 13 apiece at the buzzer, with Darragh McNulty and James Cummins tipping in some great scores for The Bish. Fulton and Jack Summersgill showed off their three-point shooting at the other end, and kept the scores raining in in the second quarter to ensure not much separated the teams at half time, 22-18 in favour of The Bish.

As the clock ticked into quarter three, St Malachy’s continued to press hard, with Conor Ryan chipping in with a nice three-pointer to close the gap early on and Matthew Sweeny of The Bish and Summersgill exchanged scores at either end to keep it neck-in-neck throughout and good scoring from James Connaire as the clock ticked to zero saw him tie the game once more at 31-31 to tee up an exciting finale.

St Malachy’s took control in the fourth quarter however, outscoring their Galway counterparts by 15 points to 3, as points came flooding in from Doherty, Fulton and Cormac O’Rourke. A fantastic defensive display from the Belfast team saw them keep The Bish at bay, and despite the best efforts of Connaire and McNulty, they just couldn’t break inside and Malachy’s held on for a much-deserved win in the end.