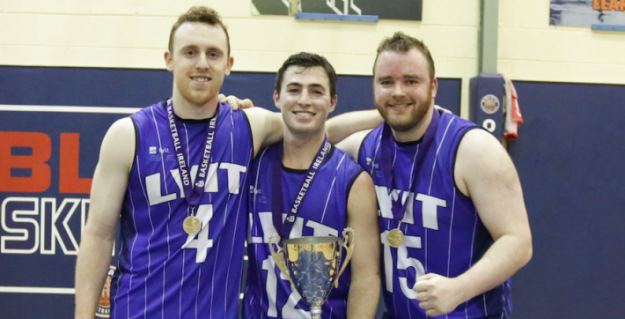 Letterkenny IT 95-82 Dundalk IT (after overtime)

GRIFFITH COLLEGE DUBLIN (GCD) eked out a worthy revenge on NUI Galway in the NBCC Men’s Division One final this afternoon as they overcame the Galway style in emphatic manner at Oblate Hall, Inchicore.

In a repeat of last year’s final which NUIG won, GCD were in control from the off, with Conroy Baltimore, Alex Calvo and Charlie Coombes dominating early on to drive them into a 29-18 point lead at the end of the first.

Eugene Williams and Joseph Tummon were the star of the show for NUIG, and put in a hard-working second quarter to close the gap somewhat, outscoring GCD 20-21, to leave the gap at 10 going in at half time, 49-39.

Despite the hard work from Galway though, it just wasn’t enough in the face of the well-drilled and well-oiled machine that was GCD, with Justin Goldsborough and Jose Maria Gil Narbon dunking them to glory and as the third quarter got under way, the Dublin college didn’t take their foot off the pedal at all, producing yet more dunks and superb three-point shooting to open up a 69-48 point gap. Good scoring from Tummon, Paddy Lyons and Williams was just not enough in the face of a pacey and thrilling offense from Griffith, and it was truly their day as they won out 90-60 in the end.

LIMERICK IT stormed home to glory in the NBCC Men’s Division 3 final at Oblate Hall, Inchicore, Dublin this afternoon as they came back from a half time deficit to secure victory.

Dillon Burns and Krystian Burchardt were the stars of the show for Michelle Aspell’s side, as they bagged all the first half points for their team, with 22 and 15 points respectively to keep themselves within 10 of GMIT going in at the break.

GMIT came out sharpest from the start though, with Emmanuel Saah and John Hackett driving them into an early 16-29 point lead at the end of quarter one. Strong scoring from Hackett in the second quarter kept their scoreboard ticking over as LIT began to find their feet courtesy of Burns and Burchardt.

An intense and fast-paced third quarter saw just two points between the sides midway through, with GMIT trying to cling on to their lead, but LIT had it narrowed to just one point at the end of the third, teeing up a thrilling finale.

Quarter four is where the Limerick side really hit the ground running though, drawing the sides level with two minutes gone, before stretching out their lead midway through and soon had opened up a 73-67 point gap. Burns and Burchardt remained the danger for the Limerick men and they drove on home to a 78-71 point win in the end.

THE MAGNIFICENT SEVEN of Ulster University in Jordanstown secured a historic victory in the NBCC Women’s Division One final at Oblate Hall as they overcame DCU in their first ever final at this level to scoop the title.

A nervy and competitive closing four minutes saw DCU throw everything they had at the seven-strong UUJ squad, and despite tired legs and a tough pace on the court, the Ulster side held on to secure the memorable victory.

Nyasha Sarju and Randyll Butler were two of the stars for UUJ, controlling the pace of the game from early on to see them into an early 20-14 lead at the end of the first quarter after a frantic opening 10 minutes. Aoife Maguire and Sarah Fairbanks led the way for DCU, with Maguire proving to be unstoppable on defence and Fairbanks performing well under the boards, but UUJ still had the edge at half time, 35-24.

Mark Ingle’s charges came tearing out of the blocks in quarter three though, and put a full court press on to UUJ to force errors. Force them they did, and DCU began to grab back some scores with Megan Connolly and Caoimhe Moore both on target. Despite a quiet patch for UUJ, they soon found their feet again, with Sarju, Butler and Aoife Callaghan working for every single ball – Butler in particular hugely impressive under the boards – and stretched their lead once more at the end of the third – 47-38.

The fourth quarter was a much closer affair as Fairbanks really stepped up to the mark for DCU, and netted some brilliant shots in quick succession, and suddenly, the game was all square. Sarju responded in style at the other end though and a massive three-pointer from Brianna Mulhern put momentum back with UUJ and they held their breath as the clock ticked down, with Aoife Callaghan just making sure of things from the free throw line to finish 62-58.

IT WAS AN ALL-LIMERICK affair in the Oblate Hall in Inchicore today as the first of the NBCC finals got underway with Mary Immaculate College taking on near neighbours Limerick IT in the Women’s Division 2 final.

Indeed, it wasn’t just an all-Limerick affair as it was also a family one, with a battle of head coaches as husband and wife, Tony Hehir and Michelle Aspell, went head-to-head on the sideline.

The two teams served up yet another cracking game of basketball, having already dished up a thriller earlier in the year, and a determined Mary I side came back from behind to snatch victory at the death in overtime.

Indeed, Sarah Phelan was the stand-out star for the college, leading her side forward with style, netting vital points and setting up crucial plays, to see her side come back from an 11-point half time deficit to tie the game at the final buzzer.

The third quarter was really where Mary I made the tracks back into the game, with Sarah Coen and Phelan combining well for some great scores and it was this duo who drove the side on to a nail-biting overtime and a heart-stopping win. Best of LIT on the day were Nadine Rice and Aoife O’Connell, who stood firm under the boards and grabbed some well-taken scores, but victory was all Mary I’s as the buzzer sounded on a 57-55 scoreline.

LETTERKENNY IT recorded a memorable victory in their first ever Men’s Division 2 NBCC (National Basketball College Committee) final at the Oblate Hall in Dublin today, as they ran out 95-82 winners over Dundalk IT in overtime.

Stephen Casiello (or T-John as he’s more affectionately known) was the spark that ignited the LYIT win, as he – along with Jack Mackey, Conor Reid and Peter Lynch – drove the side forward and showed leadership at crucial moments to see their side through. Casiello put in a man of the match performance as he drove relentlessly at the Dundalk defence, netting vital scores to keep his side in touch, and covering every single board of the court.

Indeed, it wasn’t all plain sailing for LYIT, as they were behind for most of the game, trailing Dundalk IT by two and sometimes four points on occasions, but never letting them get out of sight. Niall Hegarty was the danger man for Dundalk and when he was fouled out of the game in the fourth quarter, and suddenly, momentum swung in favour of LYIT. Leadership was needed and it came in the form of Mackey, Casiello and a strong display from Ray Balogun to close the gap, and when the final buzzer sounded, it was 80-80 and the game was headed for overtime.

Up stepped Jack Mackey in overtime, nailing a superb drive lay-up and a long range three-pointer early on and suddenly – for perhaps the first time in the game – there was breathing space on the scoreboard. Casiello was on hand to hit some vital free throws as the clock ticked down on a performance that will be remembered by Donegal basketball fans for a long time, as it all ended 95-82 in favour of Dundalk.

Speaking after the game, Assistant Head Coach, Niall McDermott said: “Today is a fantastic day for LYIT basketball team and the college as a whole. We’ve never reached a Division 2 final so to get here and win it in the one year is a massive achievement. Thanks to the College for their great support in their promoting the basketball programme this year and to this great group of lads for their hard work all year. We’re really looking forward to the challenge of playing Division One basketball next year.”