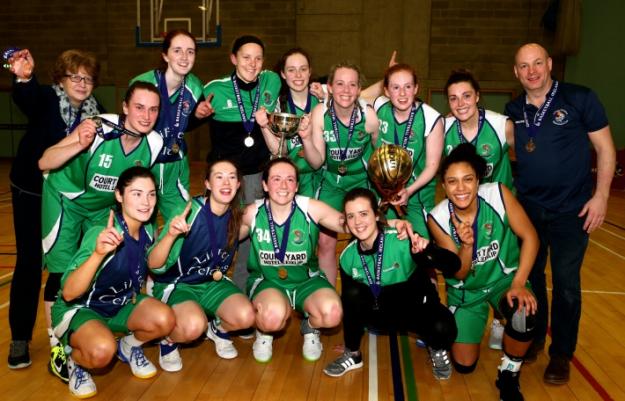 KIERAN DONAGHY was the star of the show in Letterkenny today as Tralee swooped home to glory and scooped the silverware in the final of the Basketball Ireland Men's Champions Trophy.
It was a thrilling finale in Donegal as Donaghy drove down the court and laid the ball up in style to send another epic battle with Regular Season champions, Templeogue, to overtime (66-66). That last gasp bucket was just one story of many that can be told from today’s game, with Jason Killeen shining brightest for Templeogue in one of the closest Men’s Super League clashes of the year. 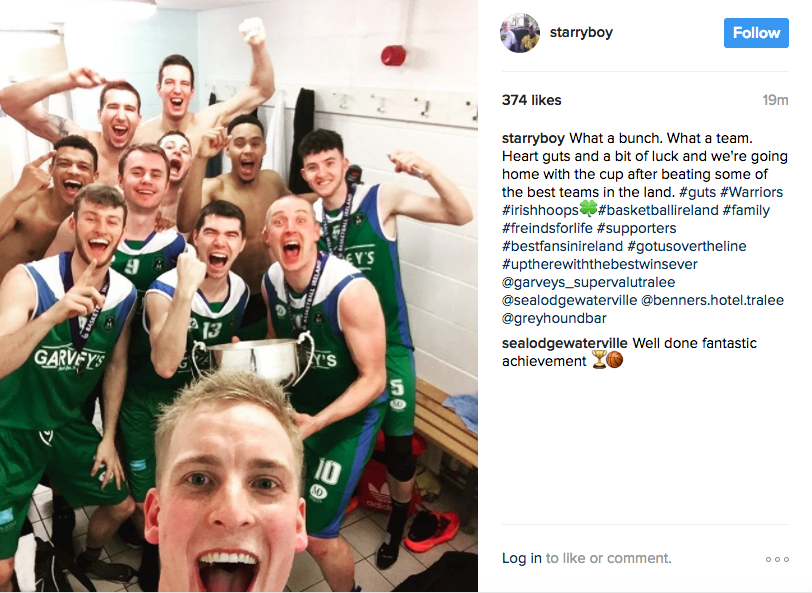 The story, however, lies with Tralee and the glory of their achievement and it is one that will be told for many years to come. From Donaghy to Trae Pemberton – a guard who has dazzled for the Kingdom throughout the season - to Goran Pantovic, the team worked as a unit throughout and managed to hold on in the dying seconds to add another page to the history books.

It was Pemberton who stepped up to the mark with 7.8 seconds on the clock in overtime as they trailed Templeogue 73-70 and as hearts dropped around the court when his first effort did not find the mark, Donaghy was on hand for the offensive rebound to feed Pemberton once more and he made no mistake second time of asking to tie it yet again, 73-73. With double overtime looming, Donaghy had the final say of the game, adding a free throw in the dying seconds and it was with bated breath for all of Kerry as they watched the clock tick down in agonizing fashion (interviews with Mark Bernsen and Kieran Donaghy available here).

It wasn't just the final game of the day though where history was made as, overall, the last weekend of the Basketball Ireland National League season certainly closed with a bang, with new champions born on the court across the two days.

Courtyard Liffey Celtics made history for their club when they pipped Ambassador UCC Glanmire to the Women’s Super League play-off title on Saturday evening – stopping Mark Scannell’s charges from scooping four-in-a-row with a formidable display from Sorcha Tiernan being the difference between the sides (full reports below).

There were big celebrations for Keane’s SuperValu Killorglin early on Sunday too, as they brought the Men’s League Cup title home to Co. Kerry with a determined display against Cork’s BFG Neptune. Garny Garcia Nivar was the stand out star for the Kerry side, as he bagged 21 points and a huge volume of rebounds to send them home to victory (full reports below).

Kilkenny’s Marble City Hawks will be celebrating this evening as well meanwhile, as they pipped ITC Basketball of Carlow to the crown of Women’s Division One play-off champions. The Kilkenny team – who just two months ago had to suffer the disappointment of a Hula Hoops National Cup final loss against Ulster Rockets - had no fear going in to today’s game despite facing off to this year’s Regular Season champions and Kelly O’Hallahan stole the show, driving Hawks home to a memorable victory (full reports below).

KEANE’S SuperValu Killorglin were crowned Men’s League Cup champions in Letterkenny this afternoon after a dominant display over BFG Neptune in the final.

The Kerry side were lead to glory thanks to a superb  performance from MVP Garny Garcia who bagged 21 points and a huge volume of rebounds to keep them ahead.

Indeed, despite the best efforts of an on-form Sean Jenkins and Gary Walsh, Killorglin found their rhythm from the second quarter, with Declan Wall netting some big shots, and Andrew Fitzgerald tipping in some crucial scores.

Neptune came back on a run in the third quarter, with Sean Jenkins and Walsh making some inroads into the deficit, but Garcia, Wall and McLoughlin had too much fire power, and soon got back on track to go on and secure victory and the League Cup title.

MARBLE CITY HAWKS drove home a massive win in Letterkenny this afternoon as they pipped ITC Basketball, Carlow, to the Women’s Division One play-off title.

Superb performances from Kelly O’Hallahan, Elizabeth Munnelly and Katie Fox were the difference on the day for the Kilkenny side, with MVP O’Hallahan top-scoring with 19 points on a day where scores were at a premium for both sides.

Indeed, a close and tense opening quarter saw just three points between the sides at the buzzer, with Hawks leading 9-12. Carlow’s Jamiyah Bethune and Ciara McCarthy came out strong in the second quarter, driving their team forward and as the lead changed hands on numerous occasions throughout the quarter, a superb finish from O’Hallahan saw Hawks hold a 21-22 lead going into the third.

Hawks really drove forward in the third quarter, with Elizabeth Munnelly, Aine Sheehy and Shelia Sheehy all making big impressions for the Kilkenny side, helping them to carve out a ten-point lead, 34-44 going into the last.

Holli Dunne and Bethune drove Carlow forward in the fourth, but the damage had been done, and though they closed the gap back to four at one stage, Hawks ran out deserving winners in the end, 47-55.

COURTYARD Liffey Celtics dared to dream this evening in Letterkenny IT, Co. Donegal this evening as they faced their nemesis Ambassador UCC Glanmire in the Women’s Super League play-off final.

Following a rollercoaster of a season between the two teams – with one win each in the Super League, while Glanmire had the better of the spoils in the Hula Hoops Cup final back in January - today, though, it was all about Liffey Celtics as they drove into a lead midway through the first quarter and did not let it go.

Sorcha Tiernan and Anna Pupin were the stand out stars for the Kildare side who were without the services of their taliswoman, Emma O’Connor, who suffered an injury in their semi-final against DCU Mercy last weekend. And, despite the best efforts of Grainne Dwyer and Casey Grace of Glanmire, it just wasn’t to be, as cheers rang around the arena as the final buzzer sounded on a 54-64 point win for Liffey Celtics.

“I can’t put it into words at the moment," said Liffey Head Coach, Mark Byrne. "I’m so proud of the girls. They have done so well. If you’re ever going to win anything, chances are you’re going to have to go through Glanmire to do it. I think we’ve come on so much since the Cup final – we’ve won eight in a row since that day and I’m so proud of them."

TEMPLEOGUE and UCD Marian dished up a thriller in the first of the Men’s Champions Trophy semi-final at LYIT, Letterkenny this afternoon, with Templeogue just managing to seal victory in the end thanks to a superb interception from Lorcan Murphy in the closing 30 seconds.

Indeed Murphy and Jason Killeen were the sparks that ignited the Templeogue victory, bagging 38 points in total for their sides.

A close and fast-paced first quarter saw Dustan Moreira and Conor Meany sending UCD Into an early lead, but Murphy, Paul Cummins and Killeen were on hand to close the gap for Templeogue to leave them trailing by just one (20-21) at the buzzer.

It remained neck-in-neck throughout the second and third quarters, with Templeogue leading by three at half time (34-31), before UCD had the game level midway through the third (47-47) to tee up an exciting finish.

Templeogue found an extra gear as the fourth quarter ticked on, with Murphy and Killeen again proving the difference for them as they began to widen the gap between the two sides. However, UCD were not finished just yet, and with 34 seconds on the clock, had it back to a three-point game (67-64). The clock ticked under the 20-second mark and as UCD pushed for a three-pointer, Lorcan Murphy made a vital interception and stormed up the court where he drew the foul and bagged both of his shots from the free throw line to give Templeogue a five-point cushion, which they then extended courtesy of Lawrence (Puff) Summers from the free throw line to win out in the end. Templeogue now advance to the final tomorrow (Sunday) evening at 4pm.

BFG NEPTUNE have booked their spot in the Basketball Ireland Men’s League Cup final after overcoming Ulster University Elks in the semi-final at LYIT this afternoon.

After a close and competitive first quarter which saw Neptune hold just a one-point lead (14-15) at the buzzer, the Cork side settled into their rhythm in the second, with Tanner Brooks and Sean Jenkins netting 21 points between them in the half to give them a nine point lead going in at half time.

Will Koppenhaver kept Elks in it throughout, shooting well and rebounding strong to keep the Ulster side in touch, but Brooks continued to add to his tally at the other end, with David Murray and Adam Heaphy chipping in some points to see Neptune ahead 39-54 at the end of the third.

Elks began to pick away at the deficit as the fourth got underway, but Brooks, Jenkins and Heaphy had just too much in the tank, and ran out convincing 48-72 winners in the end.

KEANE’S SUPERVALU KILLORGLIN booked their spot in the Men’s League Cup final tomorrow afternoon with a strong and determined display over Maree in the semi-final today.

The Kerry side were convincing XX to XX winners after they turned over a Maree lead midway through the second quarter to drive in front and on to glory. Despite the scoring prowess of Maree’s Eoin Rockall (who netted 25 in total on the day), Garny Garcia Nivar was just as effective at the other end for Killorglin, bagging a whopping 29 points and proving to be hugely effective under the boards.

Killorglin will now go on to play BFG Neptune in the League Cup final tomorrow (Sunday, April 2nd) at 12pm.