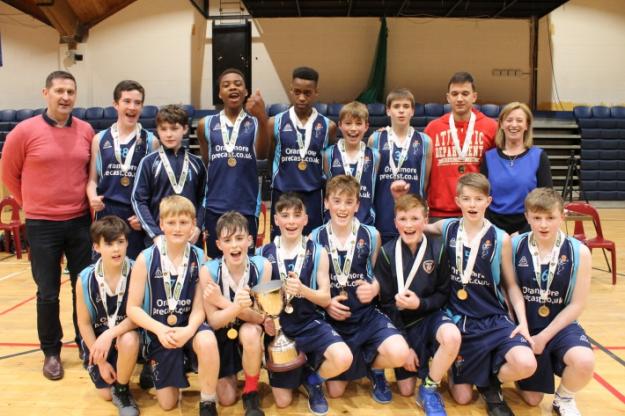 SUBWAY All Ireland Schools Under 14 Cup A Boys results

Under 14 A Boys final

Under 14 A Boys semi-finals

SUBWAY All Ireland Schools Under 14 A Boys Cup

Calasanctius College of Galway drove home to a memorable 35-32 point victory over Kerry’s Mercy Mounthawk this afternoon in a thrilling SUBWAY All Ireland Schools Under 14 A Boys Cup final.

Led by a dazzling display from Evan O’Rourke, whose tenaciousness in defence and superb assists in offense sent them into the lead early on, Calasanctius College held firm in the dying seconds to secure the three-point win.

A cracking final was on the cards from the off after the Galway side saw off Douglas CS in style in the semi-final, while Mercy Mounthawk pipped St Joseph’s The Bish in their semi-final, and it certainly was one that didn’t disappoint. Fantastic displays from Mounthawk twins, Tim and Sean Pollman Daamen were one of the main talking points of the day, having already impressed in the semi-final stages, and they scored 30 of Mounthawk’s final tally of 32 points.

Calasanctius College took the lead early on, closing the first quarter 12-8 to the good. There was nothing between the two sides throughout the second quarter though, with just three separating them at half time (21-17 in favour of the Galway side). It looked like Calasanctius College had managed to secure a bit of a cushion in the third quarter, with Raniel Oguekwe and Ben Burke knocking down some good shots to see them 29-21 ahead at the buzzer, but Mercy Mounthawk were not going to go down without a fight.

A thrilling fourth quarter saw control of the game swing from side to side, with Mounthawk taking the lead by one point with just over a minute on the clock (31-32). Oguekwe kept his cool at the other end though to bag a vital score for the Galway team to put them back in the lead once more (33-32), and a cool headed O’Rourke slotted home two free throws in the dying seconds to ensure the win on a final scoreline of 35-32 and to round off an exciting three days of Cup action.

Detailed results - SUBWAY All Ireland Schools Under 14 Cup A Boys

Under 14 A Boys final

Under 14 A Boys semi-finals

Under 14 A Girls final

Under 14 A Girls semi-finals

Day 2 - SUBWAY All Ireland Schools Under 14 A Girls

GALWAY school Coláiste Éinde came to Dublin on a mission today and they certainly accomplished it as they powered home to the SUBWAY All Ireland Schools Under 14 A Girls Cup title with a dominant 26-44 point win over Mercy Mounthawk in the final.

Coláiste Éinde laid down a marker for what was to come early on, with a 41-27 point win over Crescent Comprehensive in the semi-final, with Kara McCleane and Lucy Hynes bagging 23 points of their side’s tally.

They kept their composure going into the final too, as a strong first quarter from Mounthawk, saw the Galway side trailing early on, before a buzzer beater from Ailbhe Lisa Hanney sent them into a narrow 11-12 lead – one they would not relinquish. They continued to impress in the second quarter and this is where the game was won for them as they outscored Mounthawk 21 points to 4, with Ava McCleane to the forefront on the scoring. Despite strong displays from Mounthawk’s Cora Savage, Lara Flynn and Roisin Long, Coláiste Éinde had the upper hand at the half time break, 15-33.

The pressure remained high on Mounthawk throughout the third quarter, with Coláiste Éinde maintaining their lead and pushed it out to 17-40 going into the last and despite a strong fourth quarter from the Mounthawk side, the damage had already been won and Coláiste Éinde were crowned champions on a final score of 26-44.

Under 14 A Girls final

Under 14 A Girls semi-finals

Skibbereen Community School stormed home to a comprehensive victory in the SUBWAY All Ireland Schools Under 14 C Boys Cup this afternoon, as they ran out 49-9 point winners over Larkin Community College.

Having impressed earlier on today with a win over St Joseph’s CBS of Fairview (47-25) in the semi-final, the Cork side made no mistake in the final, driving into an early 3-11 point lead in the opening quarter to lay down a marker for things to come.

Good scoring from Ger MacEoin, Teddy Gallagher and Eluidas Andreikius saw Skibbereen dominate early and despite the best efforst of Larkin’s Mark Szeder, Cain Ledwidge and Eric Martin, held a 6-25 point lead at half time. They continued to mount the pressure in the third, with good scoring from Stevie Redmond and James O’Neill and kept Larkin scoreless for the quarter (ending on the buzzer 6-41 to the good), and Stevie Redmond added to send Skibereen home to a memorable victory.

The SUBWAY All Ireland Schools Under 14 Cup finals continue on Wednesday and Thursday, with full fixtures below.