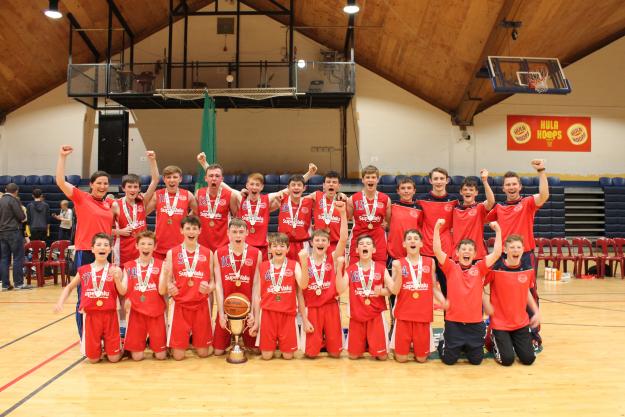 SUBWAY Under 15 A Boys semi-finals

SUBWAY Under 15 A Boys final

SUBWAY All Ireland Schools Under 15 A Boys Cup

THERE WILL be big celebrations in Killorglin this evening as the Intermediate School Killorglin scooped the SUBWAY All Ireland Schools Under 15 A Boys Cup title this afternoon with a superb win over Scoil Phobail Sliabh Luachra, 53-42.

Indeed, the all Kerry final dished up a thrilling game that saw superb defence, fantastic three point shooting and some brilliant young talent all round. A dazzling display from Killorglin’s Sean O’Brien saw him bag 22 points for his side, getting some vital scores when needed as the sides were neck-in-neck throughout most of the game.

Indeed, from the tip in, it was a close and nervy game, with the scoreboard reading just 5-3 (in favour of ISK) at the end of the first as each team found it hard to settle. With the nervy period out of the way though, both sides began to find their feet, with O’Brien scoring well and Ronan Collins and Alan Dineen shining brightly for the Rathmore school t0 leave it 15-10 in favour of Killorglin at half time.

It was neck-in-neck throughout the third quarter, with Killorglin just managing to keep their noses in front, but they really pushed on in the fourth quarter, with O’Brien, Rian O’Donovan and Conor Murphy all combining well for some good scores to send their side home to a memorable 53-42 point victory.

SUBWAY Under 15 A Girls final

SUBWAY Under 15 B Girls final

SUBWAY Under 15 B Girls semi-finals

SUBWAY Under 15 A Girls semi-finals

SUBWAY All Ireland Schools Under 15 A Girls Cup final

TUESDAY, May 9th, 2017 will certainly be a memorable date for the students of Scoil Chroist Ri, Portlaoise, as they drove home to a convincing 48-33 point victory over Presentation Castleisland in the SUBWAY All Ireland Schools Under 15 A Girls Cup final at the National Basketball Arena in Tallaght.

Superb performances from Sarah Fleming, Ciara Byrne and Jasmine Burke, saw Portlaoise home to glory in the end, but it certainly wasn’t an easy win, as Grainne Walsh and Aine Sheehan of Castleisland put in fantastic displays to make it as difficult as possible for the Laois school.

It was extremely close in the opening quarter, with both sides settling quickly and bagging some well-taken scores to see just two between the sides at the buzzer, with Portlaoise leading 7-9.

It was a close and competitive second quarter too, finishing 16-21 in favour of Portlaoise, but it was the third quarter where Scoil Chriost Ri really stamped their mark on the game, with superb scoring from Burke and Fleming to see them open up a 23-35 point margin. The fourth quarter continued in the same vein, and despite the best efforts of Presentation Castleisland, it just wasn’t to be their day and Scoil Chriost Ri ran out deserving winners in the end. 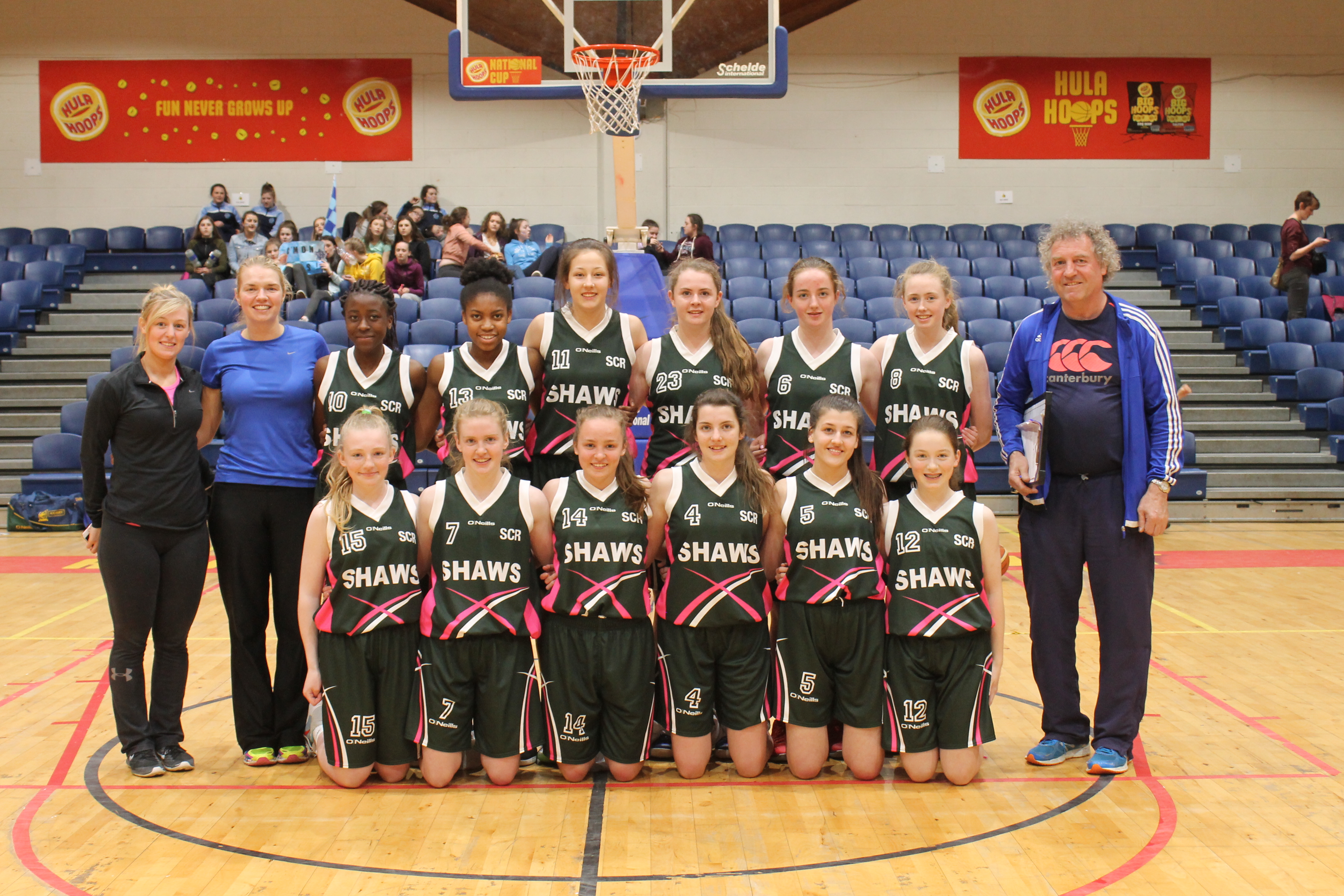 SUBWAY All Ireland Schools Under 15 B Girls Cup final

ELLIE LYDON will be the toast of Jesus and Mary Secondary School Salerno Co. Galway this week as her late, late basket in the SUBWAY All Ireland Schools Under 15 B Girls Cup final this afternoon sent her team home to a memorable two-point victory over Kerry’s Scoil Phobail Sliabh Luachra.

In what was a truly thrilling and closely contested final between the two sides, free throws from the hugely impressive Danielle O’Leary for Scoil Phobail and one from Jesus and Mary’s Aoife Bates saw the game tied at 30 apiece with just 38 seconds on the clock. A frantic rush for that game-winning basket ensued, and it was Lydon who was the hero of the hour, as she rebounded in style to lay-up to the basket for the ultimate finish.

Indeed, there was nothing to separate these two teams throughout the game, as they were 4-4 each at the end of the first quarter, before Scoil Phobail took the lead going in at half time going up by four (12-16) with O’Leary shining brightest for her side, and Lisa Blaney in form for the Galway team.

The game picked up to a frantic pace in the third quarter as the Galway school closed the margin once more, with Blaney pushing them in front by the bare minimum (23-22) at the buzzer at the end of the third, and it remained neck-in-neck throughout the fourth, before Lydon kept her cool to bag the game winning shot and send the Cup winging its way home to Galway. 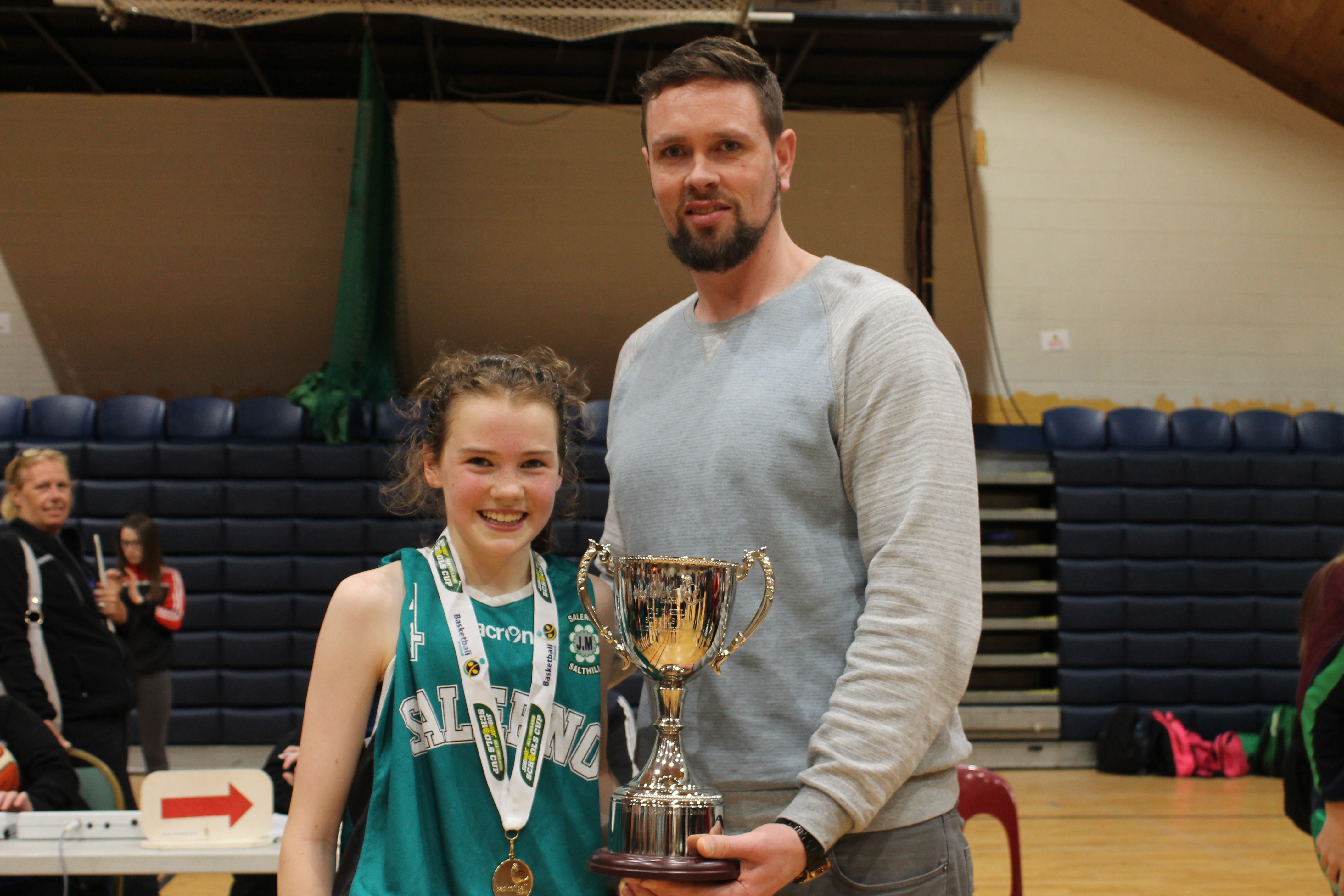 SUBWAY All Ireland Schools Under 15 B Boys final

SUBWAY All Ireland Schools Under 15 B Boys semi-finals

SUBWAY All Ireland Schools Under 15 B Boys Cup

LAGAN COLLEGE, BELFAST stormed home to a comprehensive 40-18 point victory over Our Ladies Castleblayney in the final of the SUBWAY All Ireland Schools Under 15 B Boys Cup.

Brilliant displays from Stephen Adrao, Ridwan Jama and Jack Terrins saw the Belfast side take a 6-11 lead early on, and drove on in style to secure the title. The third quarter of the game was really where they stood out as, in the face of a determined Castleblayney defence, managed to penetrate the zone well and score some vital points to put the result beyond doubt.

It was the side’s second big win of the day, having overcome Colaiste Mhuire Crosshaven in the semi-final earlier on today and they continued this unstoppable form in the final to ensure the All-Ireland title was only going home with them. 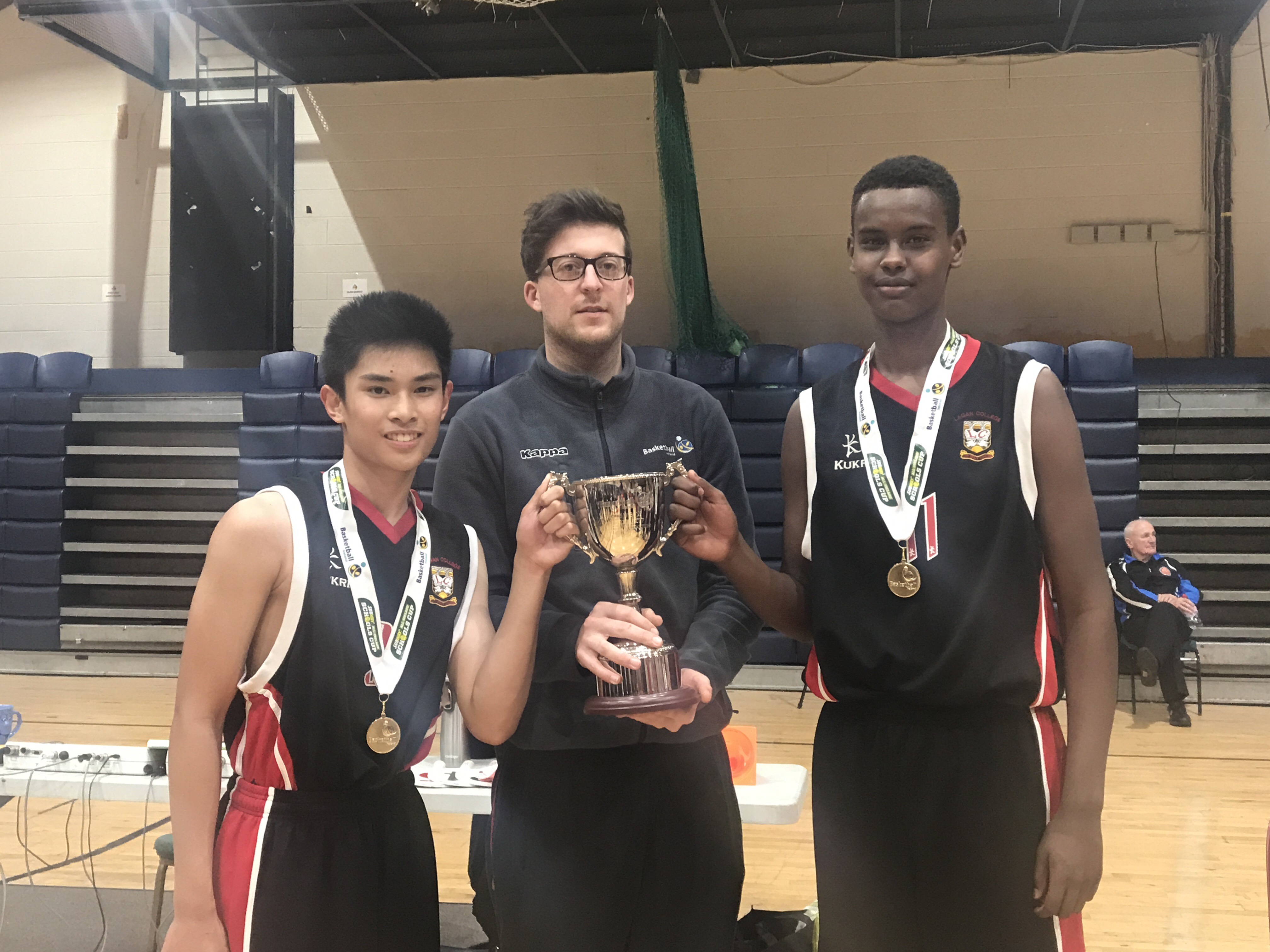 CASTLEREA COMMUNITY SCHOOL managed to hold their nerve in the face of a determined Causeway Comprehensive comeback in order to secure the SUBWAY All Ireland Schools Under 15 C Girls Cup title in a nail-biting final this afternoon.

Top scoring from Lisa O’Rourke of Castlerea looked to have given her side a comfortbale cushion as the game ticked into the fourth quarter, with Castlerea leading by eleven (21-10). However, Causeway Comprehensive were nothing if not determined and dug deep to put in a huge fourth quarter performance (outscoring Castlerea 10-3) and almost causing a major upset. Indeed, it was the cool head of O’Rourke that gave Castlerea that extra breathing space in the dying seconds, as she bagged a free throw in style to ensure a four-point margin between the sides.

There were strong displays from Causeway Comprehensive’s Katelyn Stack and Erika Diggins, but it was just too little too late and Castlerea were crowned champions. 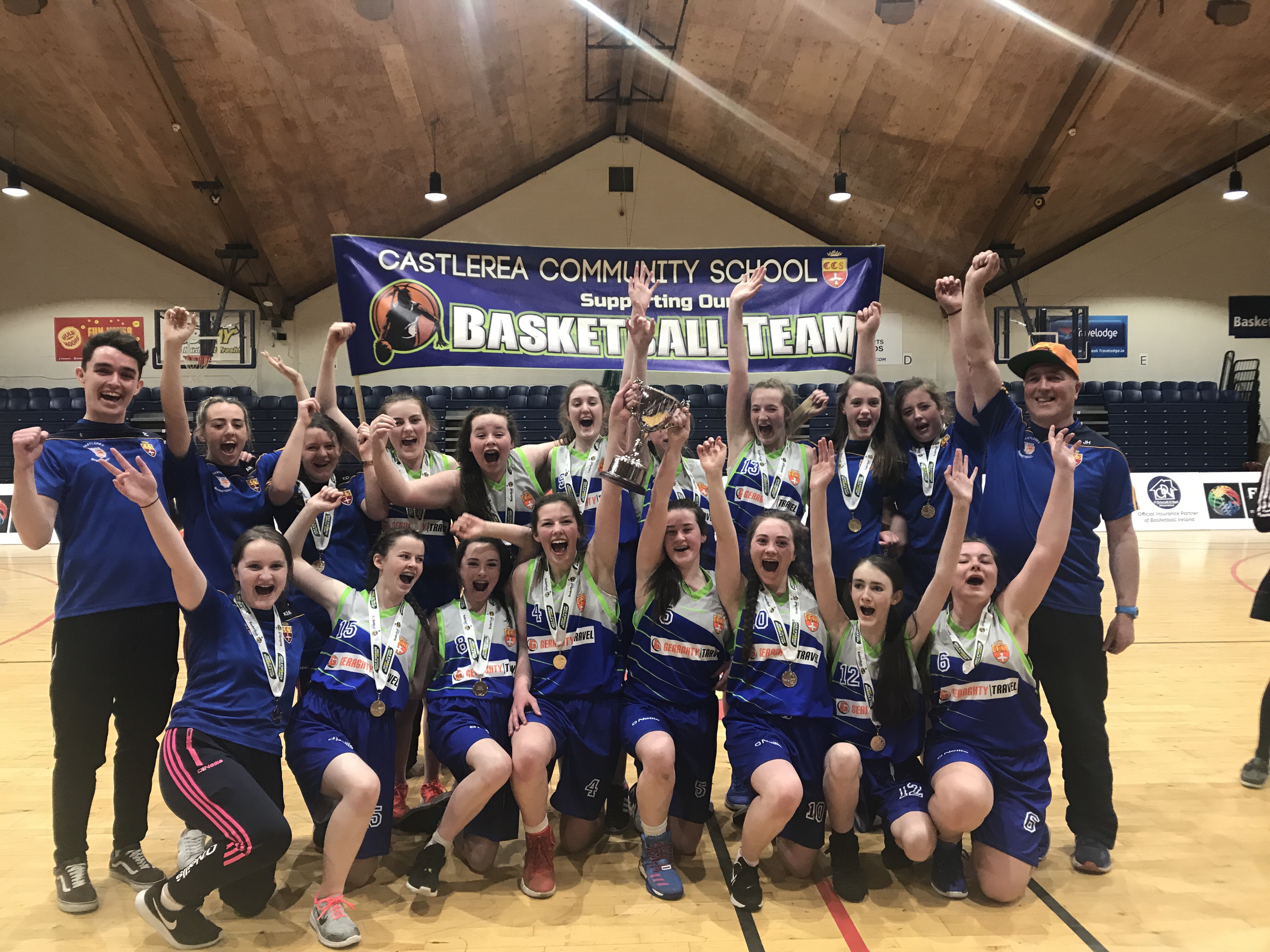