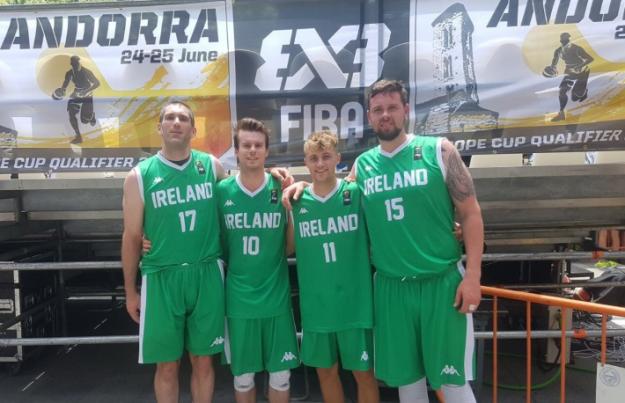 There was heartbreak for the Ireland Senior Men’s 3x3 team in Andorra this evening as their second group game against the hosts went right down to the wire with Andorra taking the win at the death, 21-20.

Jason Killeen put Ireland ahead by just one point with 29 seconds on the clock after bagging two free-throws from the line, but a steal in the dying seconds by Andorra saw them whip the ball outside and slot it home from distance to take the win on the buzzer. The loss was the squad’s second of the day, which means they did not qualify out of their group to reach the next stage of the tournament.

Speaking afterwards, Irish player Jason Killeen stated: “We are bitterly disappointed with the result against Andorra and felt like we should have taken it in the end, especially after coming back from 11-3 down early in the game. A lack of game experience hurt our decision making down the stretch and Andorra made us pay for our mistakes.

“The Oblate Basketball Club were there supporting us and made the atmosphere feel like a home game. We were delighted to see so many familiar faces in the crowd so thanks to them. This is a sport where Ireland can really excel and we should be encouraging our young athletes to play more and compete at the highest level,” he continued. “Huge shout out and congratulations to the senior women on a huge performance in France, we are all very proud.”

Ireland senior men’s 3x3 team came up against a very tough and strong Ukrainian side in the opening game of their FIBA 3x3 Europe Cup qualifying games this afternoon.

The men in green just couldn’t keep a well-drilled and tactically clever Ukraine side at bay, and went down 21-7 in the end.

Scores from Stephen James and Sean Flood early on kept Ireland in touch in the opening three minutes but, by midway through the game, Ukraine had opened up a 12-5 lead. Two more scores from Paul Freeman with just under five minutes to go on the clock were the last scores the Irish registered as the Ukrainian side took complete control of proceedings and ran out comfortable 21-7 winners in the end.