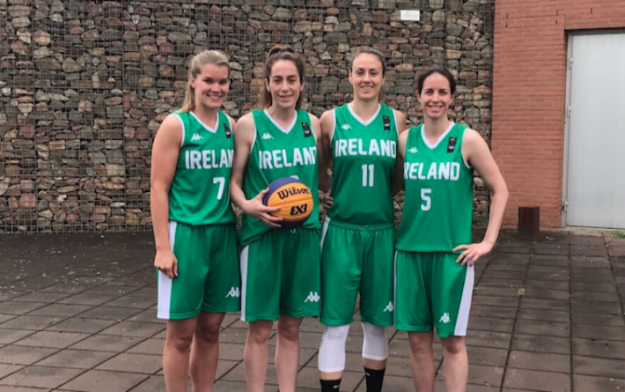 The Ireland Women’s 3x3 were drawn in Pool D for the FIBA 3x3 Europe Cup in Amsterdam, where they faced France and the Netherlands in the pool stages.

Ireland women’s 3x3 team bowed out of the FIBA 3x3 Europe Cup this afternoon after losing out 17-7 to hosts, The Netherlands.

This was the team’s second loss of the day and as a result, they do not progress past the group stages of the competition.

The home team came out strong in the opening few minutes, running into a 6-0 lead, before Ireland’s Fiona O’Dwyer got the women in green off the mark with a well-taken jump shot with just over three and a half minutes gone.

O’Dwyer was on hand to add a second a few seconds later, but the Netherlands were quick to put a stop to Ireland getting a foothold in the game, and powered on to lead 12-2 with just over two minutes left to play.

Scores from Gráinne and Niamh Dwyer and Claire Rockall were just not enough in the face of a physically strong Netherlands team, who ran out 17-7 winners in the end.

They did us so proud ðªð»ð Ireland women's 3x3 team react to their #3x3Europe Cup games today #GreenShoots pic.twitter.com/L6yhEcYVM8

Ireland women’s 3x3 team lost out to France in the opening game of their FIBA 3x3 Europe Cup pool games this afternoon.

Despite a strong display from the Irish side, clinical finishing and tough defence from France proved to be the difference in the end.

France got off to the stronger start, running into a 5-2 lead early on, with Claire Rockall and Gráinne Dwyer opening Ireland’s account.

Ireland began to settle though, and more scores from Rockall, Dwyer and Fiona O’Dwyer soon saw the game tied at 7 points apiece with just over six minutes on the clock.

France upped their defensive game and added two scores in quick succession, but again, Gráinne and Niamh Dwyer were on hand to respond almost immediately, leaving France ahead by just one point (10-9) with 4.50 on the clock.

A regroup from the French side saw them come out strong once more though, and they went on a quick run to widen the gap as the clock ticked down. Scores from Niamh and Gráinne Dwyer just weren’t enough to bring Ireland back into touch, losing out 19-13 in the end.

Ireland take on the Netherlands at 3.10pm in their second group game.