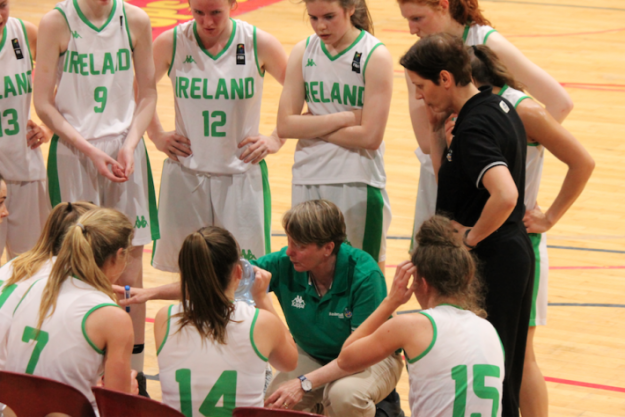 Ireland Head Coach Maeve Coleman believes both the U20 Women’s programme and Irish basketball will benefit from her squad’s campaign at the European Championships in Israel. Her side were beaten 64-54 in a 12th place classification game by an Iceland side who also avoided the wooden spoon on the last day of competition.

“U20 basketball is a perfect place for the younger members of senior squads to play,” said Coleman. “All our girls have improved individually and will see these improvements when they return to their own clubs. Unfortunately we did not have the skill level to compete with the teams here, although they gave it 100% in every game.”

Ireland brought the fourth youngest roster to the Middle East and lack of experience made results hard to come by earlier in the tournament. That led to a lack of confidence in the latter stages where Iceland registered their best performance for the 10 point win.

Both sides were seeking to avoid a winless trip to the seaside resort of Eliat and Anna Brennan made clever use of the glass to kick start a 10-0 run. There was zip and motivation to Ireland’s first quarter performance. Anna Kelly pumped her right arm for a mid-range two before the first quarter buzzer and a 21-14 lead.

The warning signs were there that Iceland were in determined mood. They’d rallied with a Thora Jonsdottir triple in the opening period and completely opened up Ireland’s zone defence in the second.

While Ireland were creating more scoring opportunities, their Atlantic neighbours were creating the open looks. Iceland connected with five three-pointers in 10 minutes including the last basket of the half for a 39-29 lead. As a country with a population smaller than Cork, they were well on their way to their best scoring performance of the tournament.

Iceland’s ball retention was also vastly improved. Ireland managed 15 points from turnovers including a superb steal from Anna Kelly in the third quarter, but Iceland were more controlled in possession. Some strong man-to-man defence gave the Irish a stronger footing and Aoife O’Halloran broke double digits to reduce the deficit to eight points with 10 minutes left to play.

Anna Kelly was top-five in championship stats for points, rebounds and steals. The Fordham University Freshman led the charge in the third quarter before a strong contribution from Aisling McCann in the fourth.

Ireland failed to register a three-pointer in the game, making the lead harder to chase. The Israeli DJ on courtside had dug out a copy of Ed Sheeran’s Galway Girl to add to the atmosphere and it seemed to inspire Maree BC’s Alison Blaney –she came on as a substitute to register Ireland’s first and only bench points, but Iceland had already laid the foundations for their win.

“U20 basketball is a perfect place for the younger members of senior panels to play. Most of the teams here are developing their younger squad members such as GB and Iceland and all teams have at least 3/4 players from their senior squads. Lots of the coaches are part of the management for their country's senior squads and are here with a primary focus of development.

We are only one of two countries who have to pay to be here (The other being Iceland). Most of the squads have only been together for 22 days inc. Germany or 30 days inc. GB. They go into training camp for two weeks, then travel to play friendlies. Germany for instance have played seven prep games before arriving here.

The Irish team had only four members who have played internationally before this. We have players playing underage club, Division 1 in Dublin and National League.

This age group has professionals and semi-pros who are coming from a much higher standard in their respective countries.

Our girls have all improved individually and will see these improvements when they return to their own clubs. Unfortunately we did not have the skill level to compete with the teams here, although they gave it 100% in every game. It has been a rewarding and enjoyable experience and I am very proud of each of the girls. I would like to thank the management team for their commitment to the program. To Tim rice for helping us with stats for all games. And to the parents who paid for their kids to play.”