BBX Ireland come on board as sponsor of U18W European C'ships 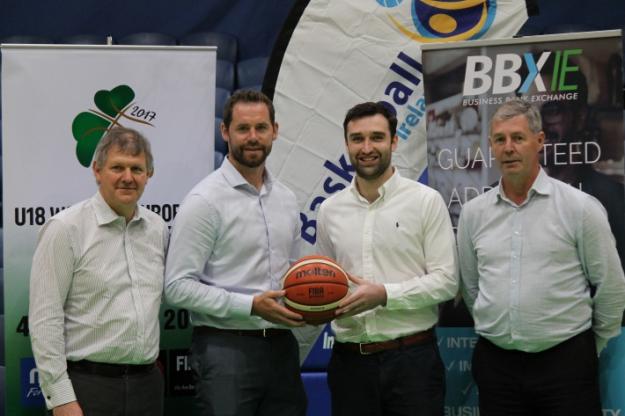 There was some big news out of Basketball Ireland headquarters this morning as it was announced that BBX Ireland have come on board as a sponsor of the FIBA U18 Women’s European Championship Division B that tip off this coming Friday, August 4th, in Dublin.

Established in 1993, BBX is the world’s largest complimentary currency platform and is currently operating across 14 different countries internationally. BBX enables businesses to take advantage of their spare capacity in order to generate a BBX currency that can be used on other goods and services offered within the BBX network. The services on offer range from professional support to insurance, to name but a few.

Speaking at the announcement of the partnership earlier today, Paul Gahan of BBX stated: “We are absolutely delighted to be sponsoring the upcoming Under 18 Women’s European Championships. We look forward to this event being the start of a long and fruitful partnership with Basketball Ireland. We’d like to wish the Irish team the very best of luck and we can’t wait to be at the games to support them.”

Also speaking at this morning’s announcement, Commercial Manager at Basketball Ireland, Conor Meany, added: “We are delighted to welcome BBX on board as a partner for what promises to be a very special event for Irish basketball. The service that BBX offers is one that we believe will be of interest to a lot of business owners around the country and we look forward to working with them as they further develop their presence here in Ireland.”

BBX Ireland is often known as the Bank of Spare Capacity. Spare Capacity is the ability to take on more business without increasing fixed costs. Spare capacity is also known as “downtime, excess inventory, unproductive/unsold assets or deal capital” and there is an estimated €5 trillion of it worldwide. Unsold appointment time, empty hotel rooms, unsold venue passes, unfilled advertising space, rapidly depreciating stock, end-of-line items or oversupplied products all represent lost revenue which otherwise will never be recovered. It is BBX’s mission to transform this otherwise lost profit into new income and investments for corporations, companies and SME’s. You can find out more about BBX by visiting their website: http://www.bbxireland.com/

About the FIBA U18 Women’s European Championship Division B:

Ireland will host the FIBA U18 Women’s European Championship Division B from August 4th-13th at the National Basketball Arena in Tallaght and the National Indoor Arena in Abbotstown. The championships will see 23 teams playing 88 games across the two venues in what is set to be a superb showcase of European basketball. Ticket information and the full schedule is available on www.basketballireland.ie