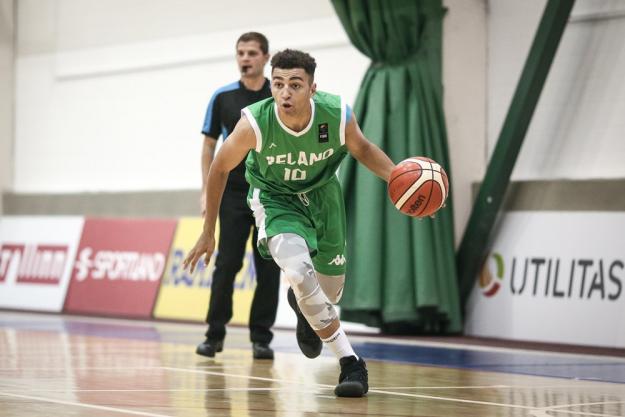 An incredible offensive effort led by Sean Jenkins wasn’t enough for the Irish U18 Men as they came up just short against Austria on a scoreline of 88-83.

The first quarter started evenly with both teams trading baskets. Jenkins got off to a good start with Ireland’s first four points. Despite the close score, Coach Conor James would have been happy with the strong start and at the end of the first Ireland had a deserved one point lead 22-21.

The second quarter started brilliantly for Ireland as they had their most explosive offensive run of the tournament so far. Within four minutes of the second quarter starting Ireland had raced into a 35-21 lead. Sean Jenkins was continuing to dazzle on the offensive end on his way to 18 first half points. Sean Daly and Oisin O’Reilly were adding more scores from the perimeter while Eoin McCann ably controlled the boards. Austria responded well to the Irish run and clawed their way back to within three at the half with Brajkovic matching Sean Jenkins basket for basket with 18 points.

In a tight second half both teams fought back and forth to get control of the game. Sean Jenkins continued his incredible offensive performance as he scored an incredible total of 42 points. Unfortunately for the Irish it wasn’t to be as Austria managed to find the scores at the crucial time down the stretch to finish out winners 88-83.

Speaking afterwards Coach Conor James said “We’re really devastated as a group because this was the first time we felt we gave 100% and yet we came up just short. Sean Jenkins was outstanding but the whole team gave so much, so to lose out was disappointing. We’ll have to just bounce back again and be ready for tomorrow.