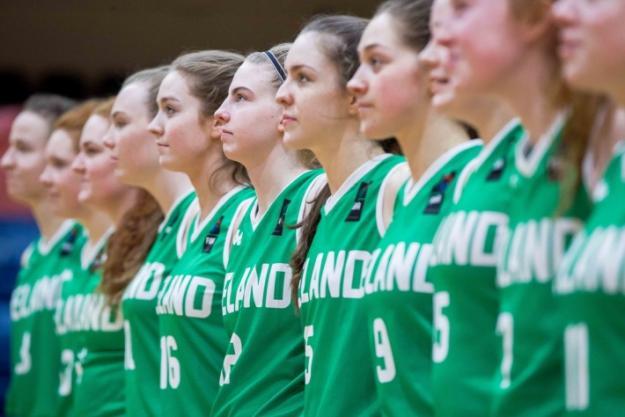 Ireland’s U18 Women got their 2017 FIBA European Championships campaign underway with a bang this evening with an 89-43 win over FYR Macedonia in front of a packed house at the National Indoor Arena in Dublin.

“That cheer when the first score went in was incredible,” said point guard Maeve Phelan, reflecting on  Rachel Huijsden’s opening score. “We’ve never played in front of a crowd like this before and we just hope we can count on their support again.”

FYR Macedonia came into the game with little expectation, but showed they couldn’t be taken for granted when Iskra Andonova landed the first three-pointer of the game to snap a 6-0 run.

Ireland were conceding well over an inch in reach to the Macedonians and their defence drew as much applause from the crowd as anything they contributed on offence. Captain Claire Melia led the way with 5 rebounds and 4 assists in the first quarter for a 22-7 lead. Both sides were keen to fast-break and the pace stepped up a notch with Amy Murphy coming in to get on the score board. Head Coach Tommy O’Mahony made full use of the bench with Sorcha Tiernan draining one from the perimeter and suddenly, 11 Irish players were on the scoreboard inside 15 minutes of basketball.

The starters came back in to press home the advantage and run up a 47-20 lead at half time, Cork’s Louise Scannell hit seven points in the second quarter while Claire Melia needed just 14:30 to register a double-double. The Kildare starlet did it with an offensive rebound and finish right on the buzzer of half-time. FYR Macedonia managed to slow down the pace in a rough-and-tumble third quarter and put together a 6-0 run. That was in spite of Ireland’s clear dominance on the boards and Sorcha Tiernan notching her third steal.

Ella McCloskey became Ireland’s 12th and final scorer inside the last minute to a massive cheer as Ireland finished the game with 38 bench points and 20 plus points scored in each quarter.

Dayna Finn says it shows the depth in their squad. “We are always talking about working as a team and trusting our bench,” she said. “We’re all experienced at this level and know we will have to rely on each other over the next week or two.”