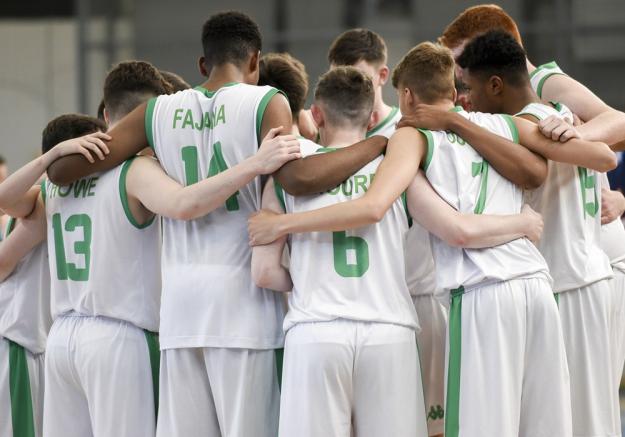 It was heartache today for Ireland Under 16 men in Bulgaria losing out to leaders of the group, Czech Republic 62-66. They finish the group stages of the tournament with two wins and three loses.

The first half was a game of swapping baskets with both teams punishing each other for the slightest mistake.  The game opened up with a magnificent three pointer from David Luhane that he quickly followed by a second. The boys in green got off to a great start but with a few misplaced passes the Czech side made it back to level before the end of the first quarter with 17 a piece. This set the theme for the game with them tying up again at the end of the second.

It was all looking very promising for Ireland at the start of the second half, but Czech got off to a six-point run at the start of the quarter. CJ Fulton was resilient in keeping the scoreboard close with a mighty three pointer to bring the lads back to within three points. However, the slick Czech shooters responded with a three pointer of their own. It looked as if Czech were going to pull away with some impressive shooting, but a timeout from Ireland allowed them to regroup and reform to bring the game back to within three points.

The final quarter opened up with missed opportunities for Ireland that were quickly exploited by the Czech side. This did little to dampen the Irish spirt as the fans rallied and the boys responded with sheer will and determination. Sanmi Fajana was again very impressive for Ireland using his size and power to secure a vital dunk that brought the score to within a point in the last three minutes of the final quarter. Ireland continued to battle to the end, but alas it wasn’t their day and they finished the game 66-62.

Speaking afterwards, Coach Pat Price said: ‘It was an improvement over yesterday’s performance, we had a better level of focus and a strong start.

All in all I would say that we’ve learned a great deal from this game but unfortunately the bounce of that ball wasn’t with us. Czech Republic did better on their rebounds and it was a battle to the final seconds.’