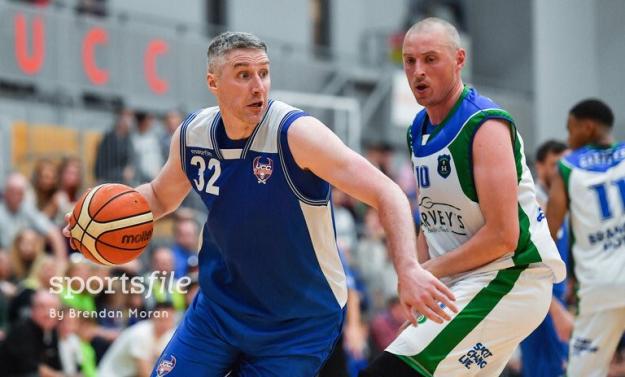 “We stole one, basically,” admitted UCC Demons Head Coach, Colin O’Reilly, as his side managed to hold on to a narrow two-point win over Garvey’s Tralee Warriors in Cork on Friday evening in the opening game of the 2017/18 Basketball Ireland Men’s Super League season.

“We played with six and a half players – two lads went down with injuries from midway through the second quarter," he continued, acknowledging that they were also without their American for the game.

"It was a great win for us today, but it will probably cost us [due to injury] for the next couple of weeks. It’s good to get a big win in front of a full house, and it’s fantastic to get one that we didn’t expect. We were over-matched in every position.”

Elsewhere, reigning League champions Black Amber Templeogue overcame DCU Saints in style at the University complex on Saturday evening, with Lorcan Murphy back to his old ways, dunking his team home to glory. A big talking point for home fans was the return of veteran Emmet Donnelly into the Saints’ side.

Meanwhile, Maree will have to regroup ahead of next weekend’s game against Belfast Star, as Moycullen welcomed them up to Super League basketball with a bang on Saturday evening, as the latter ran out convincing 88-63 point winners in the big Galway derby at Oranmore.

“It was a tough game," admitted Head Coach John Finn. "Moycullen are a good team. It was a good lesson for us in that this is going to be a quicker game than Division One so we need to get used to that. They shot the ball better than us, and we just have to get up to the speed of the game.”

Hula Hoops National Cup champions Griffith Swords Thunder meanwhile also took the spoils from their Saturday evening clash with Pyrobel Killester, while Belfast Star travelled back home Friday evening with a big win over KUBS under their belts, as they ran out 40-point winners in the end.

There were a number of big talking points from the Men’s Division One meanwhile were newcomers to the League, LIT Celtics and St Paul’s Killarney. The former saw one of their roster, Matt St Amour bag a whopping 57 points against Ej Sligo All-Stars on Saturday which, surprisingly, was not enough to secure the Limerick team a win, while St Paul’s welcomed basketball back to Killarney with a bang as they played out a thrilling one-point win against Dublin Lions in front of a capacity crowd at the sports complex. BFG Neptune meanwhile secured two big wins from their double-header weekend against IT Carlow Basketball and LYIT Donegal.