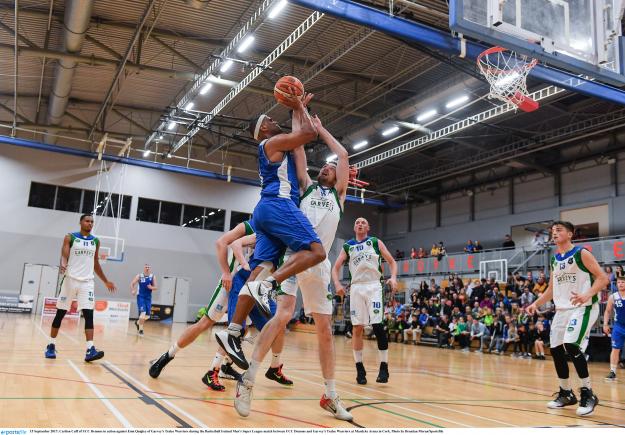 Belfast Star and Griffith Swords Thunder kept their winning start to the season intact this weekend as they overcame Maree and Eanna respectively at their home venues.

“It was good to get the win," said Thunder, head coach, Dave Baker. "We knew they had new players in and a new coach and that they'd be well drilled. They are getting better each year, but it was good to pick up a win."

“It’s a big win for us, Templeogue are an outstanding team, we lost to them twice last year and if you go down through the players on their roster, it’s like a who’s who of Irish basketball,” admitted Killester head coach, Brian O’Malley.

“We played with that little bit of desperation today that maybe Templeogue didn’t have. We had a tough start this year and last year, Thunder and Templeogue, so a baptism of fire. We felt all week that we let ourselves down a little bit last week, so it’s good for us to come out with the win.”

Also speaking after the game, Black Amber Templeogue Head Coach, Mark Keenan said: "I’m obviously disappointed, we didn’t play to our potential. We had patches of good and we had moments, early in the fourth when we got ourselves right back in it and looked like we could go on, but all of a sudden the game switched again.

"Killester were better than us tonight, we didn’t play to our full potential so fair play to them for bouncing back from last week. We’ll just have to regroup and bounce back ourselves next week."

The other big clash of the weekend saw UCD Marian overcome UCC Demons in a nail-biter in Dublin, 83-80.

In the other Super League games of the weekend, Garvey’s Tralee Warriors made light work of Mark Ingle’s KUBS side, running out 75-37 point winners while DCU Saints made the long trip to Galway worthwhile, coming out the right side of their clash with Moycullen, 85-78.

There were some big clashes in the Men's Division One this weekend as well, with Portlaoise Panthers and IT Carlow Basketball wrapping up proceedings in a big local derby on Sunday evening.

Martin Conroy's side came out the right side of that result on the road, and he was happy to secure a win after losing out to BFG Neptune last weekend.

Speaking of BFG Neptune and Paul Kelleher's charges made it three wins from three on Saturday when they overcame Ej Sligo All Stars at Neptune Stadium, while Ulster University Elks got their season underway with a bang, winning both of their games over the weekend, defeating LYIT Donegal and Dublin Lions in the space of 24 hours.

Elsewhere, Matt St Amour was making headlines for LIT Celtics once more this week as he bagged 53 points in another thrilling game. Unfortunately, his high scoring still wasn't enough to secure his team the win though, as a huge 67-point half from St Paul's Killarney saw them drive to victory.

Keane's SuperValu Killorglin managed to just hold on to victory over a determined Fr Mathews side on Friday night, while Ballincollig got the better of Titans up in The Jes on Sunday afternoon.