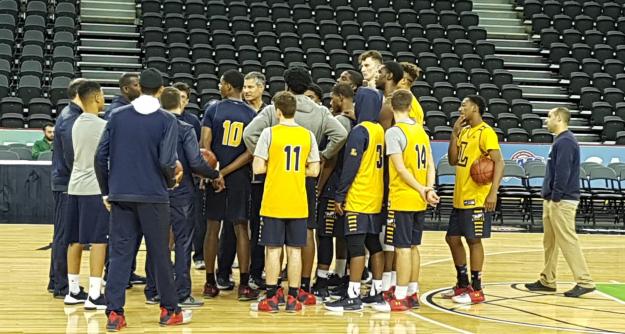 Tralee native Cian Sullivan made his first ever start for La Salle University, but couldn’t help them overcome Towson in Game 2 of the Basketball Hall of Fame Belfast Class at the SSE Arena, Belfast.

Despite the 67-60 defeat, it was a memorable night for the redshirt freshman in front of the home crowd.

Towson advance to meet Manhattan Jaspers in the Championship Game at the SSE Airtricity Arena at 17:00 on Saturday December 2nd. La Salle contest the Consolation Game against the College of the Holy Cross at 14:30.

Tickets for those games are available at http://www.belfastbasketballclassic.com

It was a strong and assured opening from Sullivan. He is the tallest player in the Atlantic Ten Conference and used his 7’2 frame to win tip off over Alex Thomas. The 21 year old stuck diligently to his assignment. He restricted Thomas to a single field goal attempt. On offence he was happy to set the screen and watch the ball sail over his head while BJ Johnson established himself as La Salle’s stand-out player.

Stroke looking good for Cian. LeSalle vs Towson starts in 30 minutes at the #BelfastClassic pic.twitter.com/XnQ94n4Ew8

Johnson declared for the NBA in March but was back in an Explorers uniform to complete his senior year and led the early scoring. La Salle were 08-04 ahead when Sullivan hit the bench and it was level 33-33 at the turnaround.

Towson took the lead for the first time in the game with 04:24 on the clock and went 63-58 clear when Eddie Keith II outsmarted the La Salle defence with a wrap-around layup and Brian Starr beat the 30 second shot-clock for three points.

La Salle Head Coach Dr. John Gianini kept faith with center Tony Washington to see out the game and the senior got the stop his side needed for a chance to tie things up with less than a minute left. That left Cian Sullivan to watch from the bench as La Salle’s efforts fell short and Towson saw out their seventh straight win from the free-throw line.

Gianini rated his side’s performance as the worst of the season to date but had only positive things to say about Cian Sullivan.

“He played well,” he said. “He’s right on track for our long term goals for him, which are very high. We think he could be a really good player for us.

“His mom and dad and his former coaches did a great job because we just love him to death. He’s been nothing but an outstanding person and student at La Salle since his arrived.”

It was also confirmed that Sullivan will start tomorrow’s game against The College of the Holy Cross.