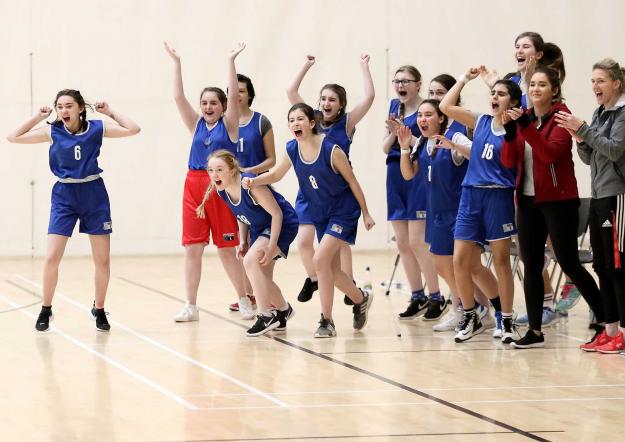 A feast of basketball action took place last week in the fabulous WIT arena where 14 finals took place. There was some enthralling action that saw teams battle it out for the south east title.

U19 A Girls
This saw newly promoted Pres De La Salle Bagnesltown face off against the resilient Presentation Waterford.
Pres Waterford had the upper hand in the first half with Bami Olukayode and Debbie Ogayemi making the scores for the Waterford side. Half time saw Waterford lead 21-9. Bagnesltown came roaring back into it in the next quarter with Amy Dooley and Caoimhe O Neill doing alot of damage. It was neck-in-neck in the last quarter with Robyn Morrissey for Waterford and Rachel Sawyer exchanging baskets. The final buzzer went with the score line fixed at 37 points each so into overtime it went. O’ Neill hit some vital baskets to push the lead out seeing Bagnesltown home to capture the title.

U16 A Girls
Loreto Kilkenny and Pres De la Salle Bagnesltown went head-to-head in this encounter. In a slow-starting game, Ava Coogan opened up the Kilkenny side's account with a big three pointer. Siofra O'Neill and Rebecca Sheehan replied for the Carlow side and it was neck-in-neck at half time, with Pres de La Salle up by one, 11-10.
The scoring improved in the second half with O‘Neill finding her range for Bagnesltown and Lucy Coogan and Elena Lauhoff doing the damage for Kilkenny. Going into the last few minutes, there was the minimum between the sides with Bagnesltown holding a one-point lead. With four seconds on the clock, Kilkenny gained possession of the ball and up stepped Leah McCarthy to hit the winning shot on the buzzer to give Kilkenny the title.
Final score Loreto Kilkenny 30 -29 Pres de La Salle Bagnelstown
Top scorers Loreto Kilkenny: Lucy Coogan 13, Ava Coogan 9, Elena Lauhoff 5
Top scorers Pres de La Salle: Siofra O’Neill 12, Rebecca Sheehan 6, Shauna O’Neill 5 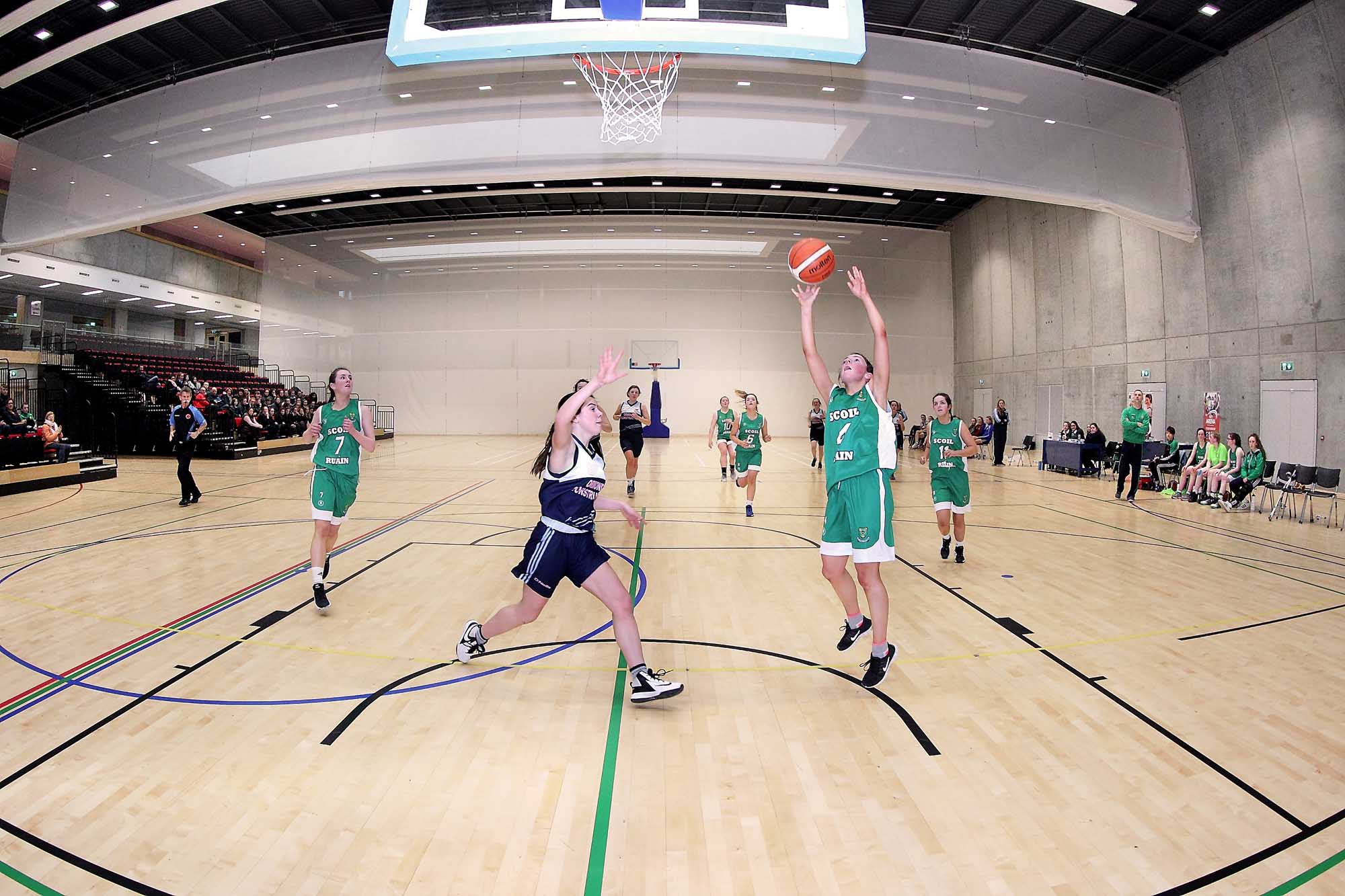 U19 B Girls
Scoil Ruain and St.Brigids Callan played off in this fixture. Scoil Ruain were out of the blocks quickest, with some full court defence allowing them to get scores from Lauren Dowling and Grainne Horan. St. Brigids kept in touch thanks to the hard-working Emily Hughes . The half time score was 27-19 in favour of Scoil Ruain.

Meibh Maher started to dominate the boards inside for Scoil Ruain but Callan had replies from Berta Sanchez and Hughes. Callan put up a good fight, but Scoil Ruain had too much fire power on the day. 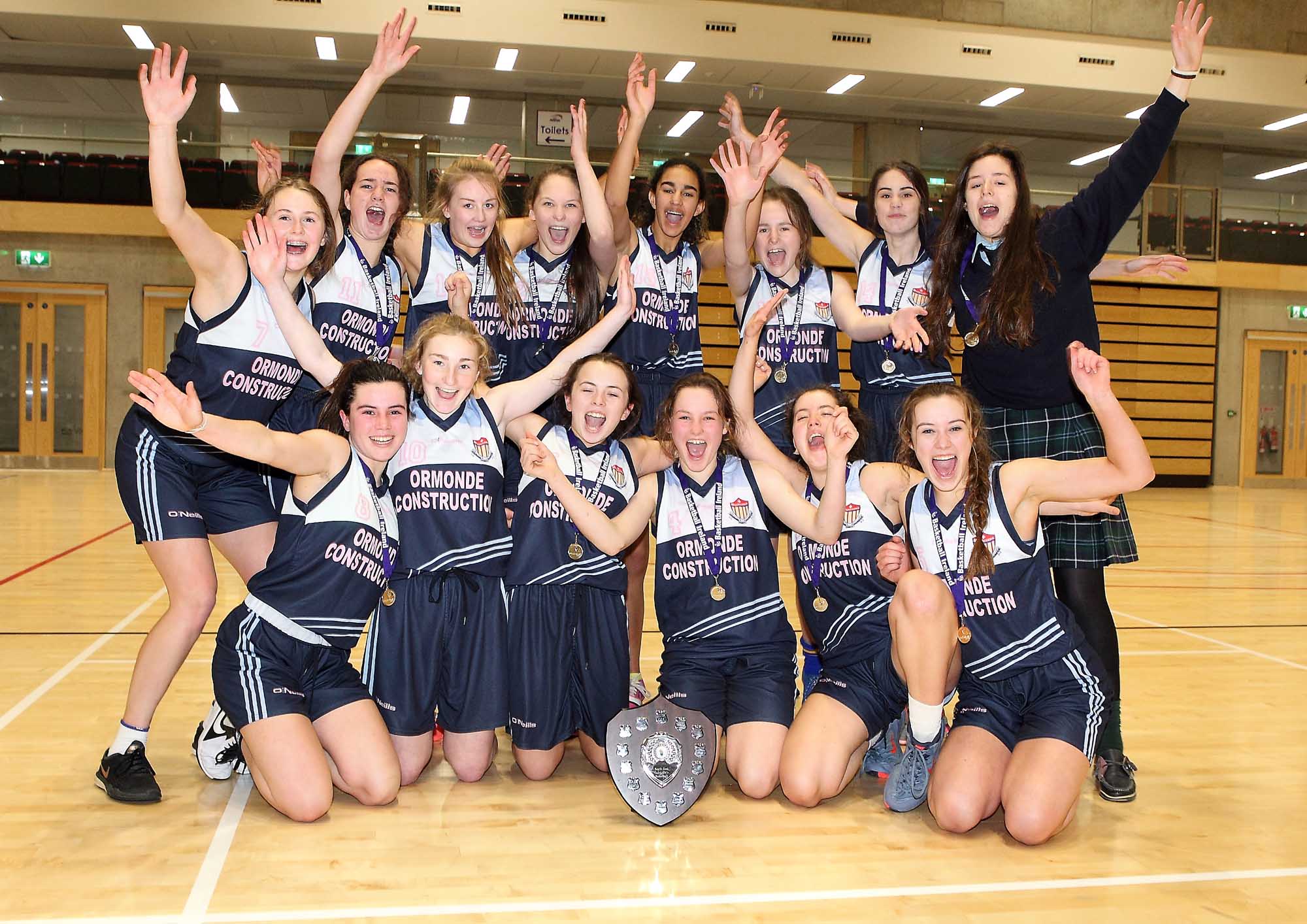 U19 C girls
Pres Wexford v Bridgetown College
This saw a repeat of the league game played a few weeks back with Pres coming out on top so Bridgetown were eager to put the record straight.
Bridgetown were out of the blocks first with Lorena Sauca finding the range for Wexford and Deirdre Byrne answering straight back. Half time score saw the minimum between the sides. Pres 10 Bridgetown 9.
The scoring rate improved for both sides with Juliet Rochford for Bridgetown making some nice moves and  Arora Martinez Musitu for Wexford doing the damage .
Coming into the last minute score was all level both sets of teams played some excellent defence and the final buzzer went with the sides level.
Into overtime Mairead Nolan found the net for Wexford but Tyra Brennan Roche replied for Bridgetown and buzzer sounded once more. There were some exciting times with both teams having chances to win the match but it was not to be. Into 2 nd period of overtime and Brennan Roche took over and saw the game out for Bridgetown .
Final score Pres Wexford 35 Bridgetown 39 (after double OT)
Top scorers Pres Wexford: Arora Martinez - Musitu 9, Deirdre Byrne 12, Uxua Oteiza 5
Top scorers Bridgetown College: Juliet Rochford 15, Lorena Sauca 14, Tyra Brennan-Roche 6

U19 D girls
Comeragh College took on Kilkenny City VEC in this final. Comeragh got the better start with some nice scores from Kelsey Corbett and Katie power. Serena Olivieri was doing a lot of the hard work for Kilkenny and finished some good baskets at the other end. Andrea Perales put the game beyond Kilkenny's reach in style though to run out 18-11 winners. 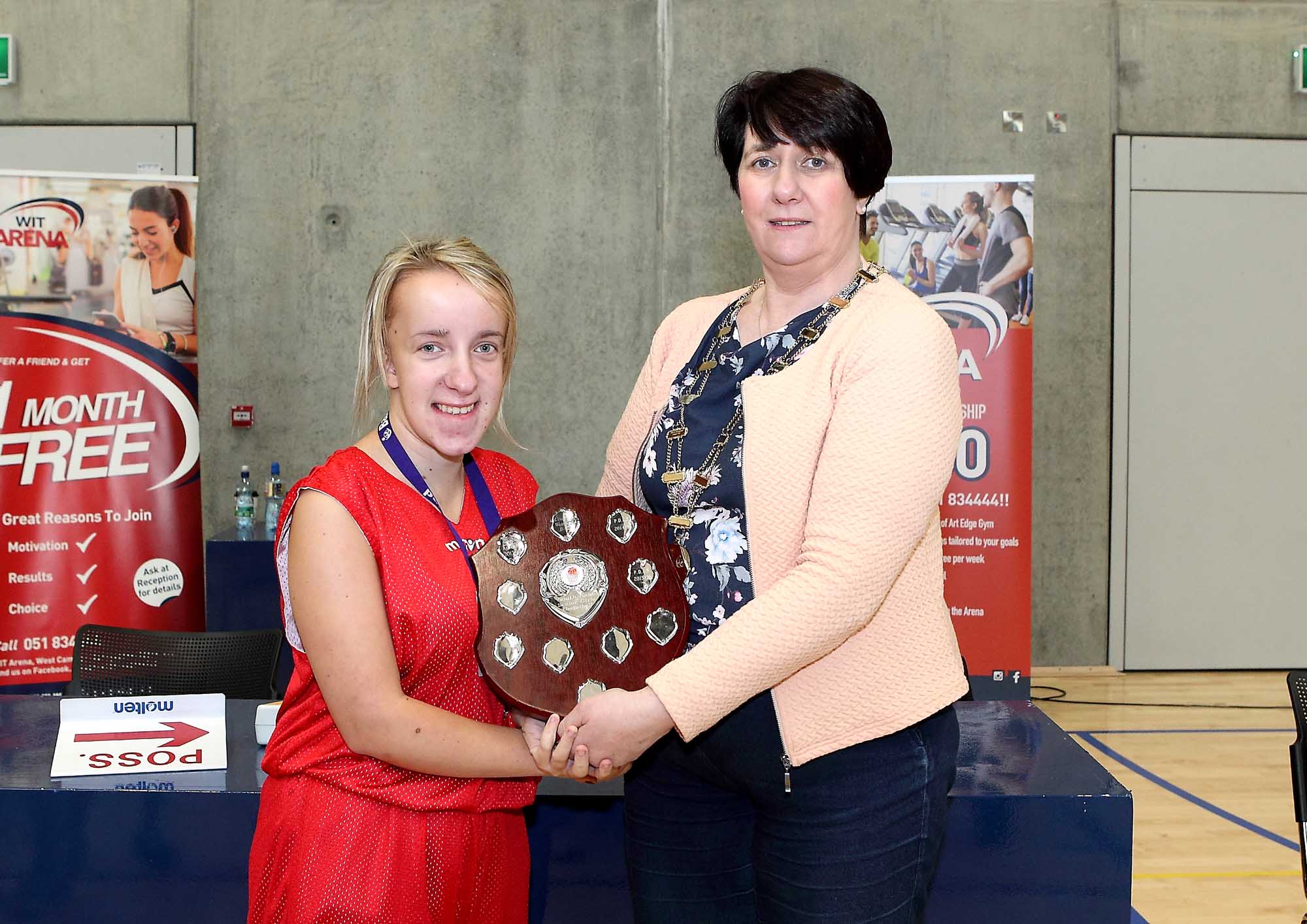 U19 B Boys
Pres De la Salle Bagnesltown took on High School Clonmel. Clonmel started off brightly with Cormac Hennessy taking the initiative for his side with some vital baskets. In reply, Tadhg Roche answered back for the Carlow side and half time saw Clonmel with a lead of 24 points to 18. In the second half, Bagnesltown upped their defence and Paul Roche converted some lovely scores at the other end. Clonmel had no answer to this increase in intensity and even though Kieran Crotty made some great moves, Clonmel juts came up short in the end.

Pres de La Salle Bagnesltown took on High School Clonmel in a repeat of the U19 final. Clonmel were looking to avenge their earlier defeat, and came flying out of the blocks with Fabian Kartan and Zak Cahalan linking up to push the lead on in the first. Bagnesltown got back into the game in the second quarter through scores from Jake O'Neill and Jamie Doyle to see the half time score 20-18 in favour of Clonmel.

The second half saw scores hard to come by, as bodies started to tire and shots fell short. In the fourth quarter Jamie Doyle took control of the game for the Carlow side and drove his side to victory.

Waterpark College took on Gaelchloaiste Cheartharlach. From the outset, this game was a close affair with the lead exchanging hands on numerous occasions. Nikolaj Siewicki got Waterpark off to a good start with some great shots while Sean O Bruadair was finding the range for the Carlow side. Half time saw Waterpark lead 21-18.

The second half was more of the same, with Kevin Kolev and Niall Purcell to the fore for the Waterford side but this was equally answered by Liam O Braonain and Evan O Corrain on the other side. Carlow had numerous chances to snatch it at the end but the ball failed to drop. Waterpark kept their cool and ran out winners.

Waterpark College took on CTI Clonmel. Waterpark started off in a zone defence and Clonmel found it hard to break down. Farouq Rabiu and Colm O’Reilly found the range for Waterpark while Danny O Duinn was making inroads for Clonmel. Half time score Waterpark 27 Clonmel 16.

It was more of the same in the second half with Evan Gloeckner hitting some nice shots for Waterpark which stretched their lead out. Niall Breathnach was doing his best for the Clonmel side to keep them in the game, but to no avail.

Wexford C.B.S took on St. Peters College. This was a tense affair as they had met twice already this year with each team having one win apiece, so a good contest was in store. Shane Hall put Wexford CBS in the lead early on but this was cancelled out by Luke Corish for St. Peter's. Going into the last quarter, there was nothing between the sides, and every basket was crucial. Denis Misculescu was in fine form for CBS but Cian Bates was picking up easy scores along the way. Both teams had many chances of gaining the trophy at the end but it was to be Wexford CBS who held out for the win.

St Paul’s Community College took on St. Peter's College in the U16 D final. The game started off with defence on top for both teams. Alejandro Gonzalez found the net for St. Paul's but this was answered by St. Peter's in the form of James Donnelly and Alex O’Donnell. The lead changed hands on numerous occasions and the title could have gone either way. But it was the Waterford side who, through Carlos Comez, hit the winning baskets to scoop the south east title with the smallest of margins.