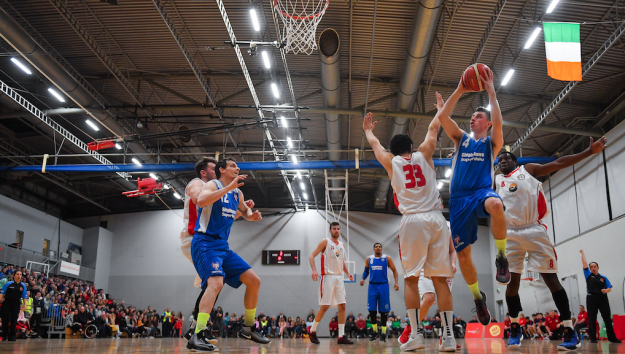 In the Men’s Super League UCC Demons and Black Amber Templeogue played out an overtime thriller for the second time this season, with Templeogue managing to win out 105-103 in the end.

A superb display from Demons’ Kyle Hosford, Lehmon Colbert and player/coach Colin O’Reilly drew the game level at full time at 92-92, but strong shooting from Luke Thompson down the stretch saw Templeogue home to victory.

Elsewhere, Maree almost caused a major upset for league leaders UCD Marian in Galway on Saturday evening, as they ran the table toppers extremely close. A 25-point game from Conor Meany and a strong finish from Neil Baynes kept the leaders in their place though as they ran out 83-79 point winners in the end.

Pyrobel Killester made it a double-header of wins at home for the club on Saturday evening as they won out 89-58 against Belfast Star.

“It was a good win, we performed quite well for long periods,” said coach, Brian O’Malley. “Defensively I think in the first half we did a good job to limiting them to tougher shots and we were able to get out and run. The scoreline is a bit flattering, as there are definitely areas we need to work on for the next game.”

There was big scoring between DCU Saints and Garvey’s Tralee Warriors on Saturday evening, and though Dee Proby bagged 43 points for DCU, Tralee’s Trae Pemberton pitched in with 41 points and good scoring from Darragh O'Hanlon at the other end to give them enough to run out 110-74 point winners over the Saints.

Brandon McGuire bagged 27 points to help Moycullen on the road to a 62-74 point victory over Éanna in Dublin on Saturday evening. A solid performance all round from the Galway side in the second half saw them edge in front by the end of the third, and widened the gap further in the fourth to win by 12 in the end.

Griffith College Swords Thunder won out the battle in Greendale over KUBS meanwhile, as despite a blistering start to the fourth quarter from the home team to close the gap to eight (60-68), Swords had too much fire power in the end, and pushed on to win by 20 points in the end.

NUIG Mystics are celebrating this weekend as they finally secured their first Women’s Super League win of the season, with a 68-65 point win over Singleton SuperValu Brunell in Galway on Saturday evening.

Despite being without the services of key player, Aine McDonagh, a superb performance from 2017 Ireland Under 18 international Dayna Finn and the talented Deirdre O’Shea saw Mystics hold firm to close out the win.

“I’m so happy,” said head coach, Mike Murray, afterwards. “We have been preparing well, and we did a lot of work getting ready this week, and it finally paid off. Dayna Finn was brilliant, she had a double-double with 17 points and more than 10 rebounds, and Deirdre O’Shea was just fantastic too. Everyone just played so well, they all did their job and we finally got the win.

"The second half of the season is hugely important, and after losing by so much in the Cup against DCU we knew we needed to regroup and we worked all week on it and we got the win, that’s the main thing – it means a lot.”

Elsewhere, Pyrobel Killester bounced back strong to win out against top of the table DCU Mercy on Saturday evening. The game was neck-in-neck throughout and with 9 seconds to go, Killester drew level at 65 points apiece and a lay-up from Hannah Thornton saw them win by two in the end.

“We’re delighted,” said head coach, Karl Kilbride. “We’ve had a rough couple of weeks, we trained really hard over Christmas and we got two poor results in the Cup and League against Glanmire so we’re delighted we were able to come out and give that performance. I’m really proud of the girls for how hard they worked and how well they played.”

Portlaoise Panthers meanwhile secured a big win on the road against Maxol WIT Wildcats on Saturday evening, with Stephanie Poland pitching in with a 33-point performance, while Ambassador UCC Glanmire had too much for IT Carlow Basketball on Sunday, winning out 85-58 in the end.

Basketball Ireland Men’s Division One:
Keane's SuperValu Killorglin got back to winning ways this weekend after a tough loss to IT Carlow Basketball last Saturday with a 90-66 point win over Ulster University Elks at home. Top scoring from Kevin Gray and Daragh Jones saw Killorglin hold the lead at half-time and they ran out convincing winners in the end.

A huge second half display from Neptune saw them win out 101-74 over IT Carlow Basketball on Saturday evening, with Jarrel Marshall pitching in with 26 points to see them home to victory, while Paris Texas Kilkenny won out by 10 points over Ej Sligo All Stars in a tough battle in Kilkenny.

Elsewhere, Matt St Amour bagged 41 points to see LIT Celtics home to a 93-82 point win over Dublin Lions, Scotts Lakers St Paul's Killarney had too much shooting power for Gamefootage.net Titans, and Ballincollig came out victorious from their Cork derby with Fr Mathews.

There were some very close battles in the Women's Division One this weekend, with both Meteors and UL Huskies managing to hold firm to win out by three points in the end over Fabplus North West and Ulster University Elks respectively.

Despite the shooting prowess of Fabplus' Makenzie Burud, a solid performance from Shannon Brady and Susie Doyle of Meteors helped them to close out their win 47-50, while it was a nail-biter as well between Elks and Huskies, with Huskies just managing to hold out for a 59-62 point win.

Marble City Hawks meanwhile put in a huge performance at home on Saturday evening to win out over nemesis Fr Mathews 63-44. A superb display from Kelly O'Hallahan and Shelia Sheehy was just too much for Fr Mathews early on as Hawks opened up a 12-2 point lead early on, and remained in control for the remainder of the game.