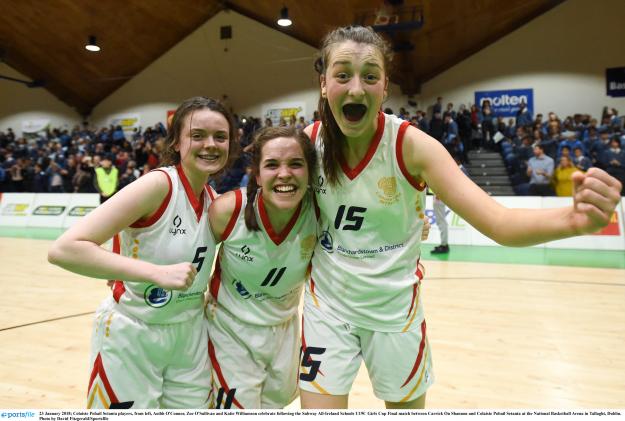 The Under 19 A Boys SUBWAY Schools Cup final lived up to an exceeded all expectations this afternoon as St Malachy’s College (Belfast) and Templeogue College (Dublin) dished up an absolute thriller in front of a packed Arena in Tallaght this afternoon.

Templeogue’s Matthew Harper was crowned MVP of a game that had absolutely everything, but had a huge supporting cast around him in the form of Iarla McKeon, Sam and Jack Walsh to name but a few.

St Malachy’s were dominant across the floor too, with CJ Fulton one of the brightest stars on the court for the Belfast team.

Templeogue started the game the brightest, driving into an 0-5 lead early on, but Malachy’s soon settled and by the end of the first – which saw Templeogue leading by just 8-11 – it was obvious to all in attendance that this was going to be a ding-dong battle.

Big scores from Templeogue captain Sam Walsh, McKeon and Adam Riordan in the second quarter were answered at the other end in style by Niall Hurson, Niall McGinnity and Matthew Mulholland and it was neck-in-neck throughout, with Malachy’s just holding a slim lead at the half, 34-32.

End-to-end action it remained, as Conor Cooke responded for Malachy’s, but again, a huge score from Jack Walsh from Templeogue kept them just ahead, before two final free throws of the quarter from St Malachy’s put the bare minimum betweent he sides going into the last, 50-51. 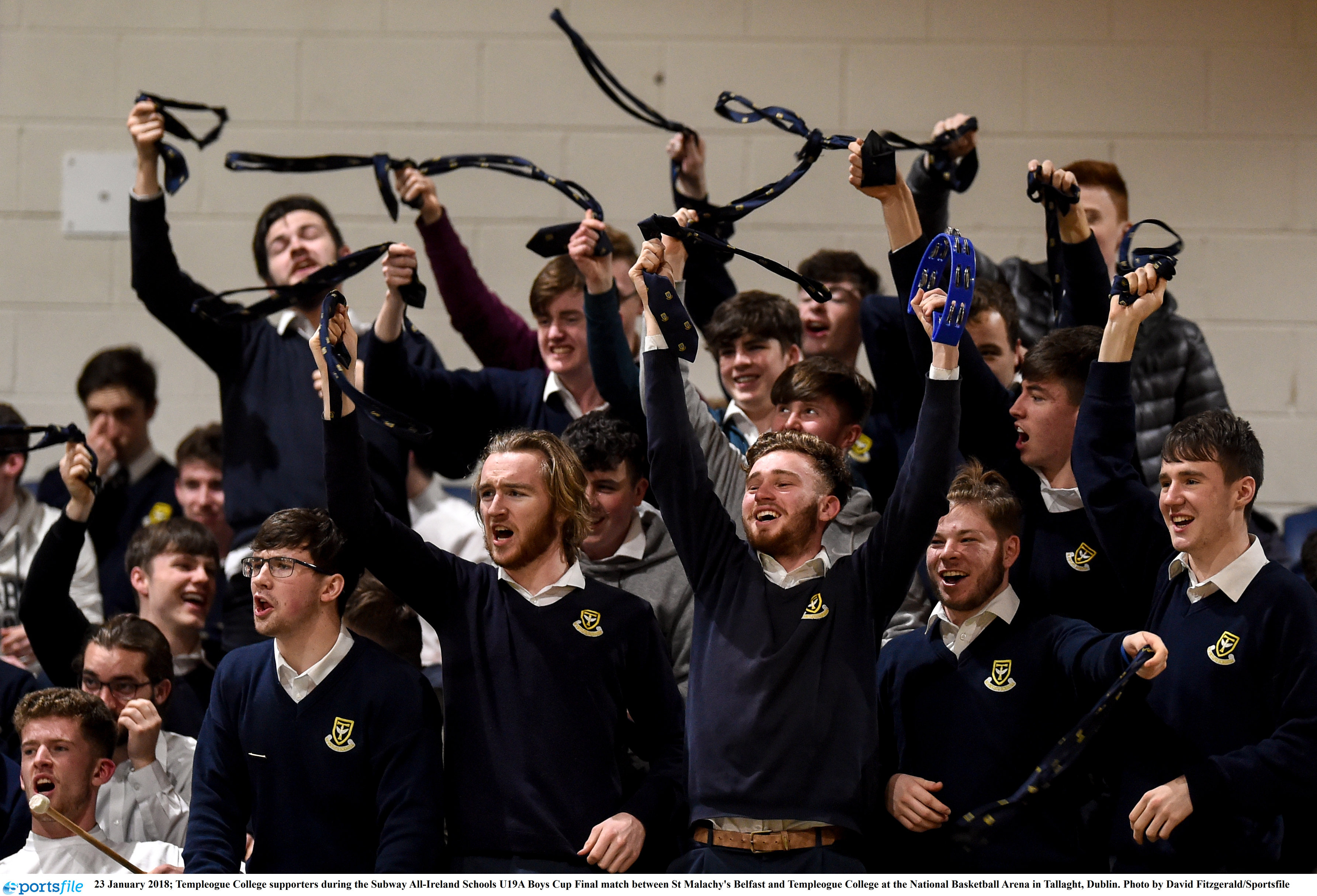 Another extremely close quarter followed, with Malachy’s taking the lead (60-59) midway through thanks to super work from McGinnity, but a super steal from Jack Walsh saw him find Harper inside under the boards, and Templeogue went up by four, 60-64. With their tails now up as they could see the clock counting down, Templeogue began to push on and a huge defensive display from the Dubliners in the closing minutes set them up for some fantastic scores at the other end and they ran out 65-74 point winners in the end after an absolutely thrilling game of basketball. 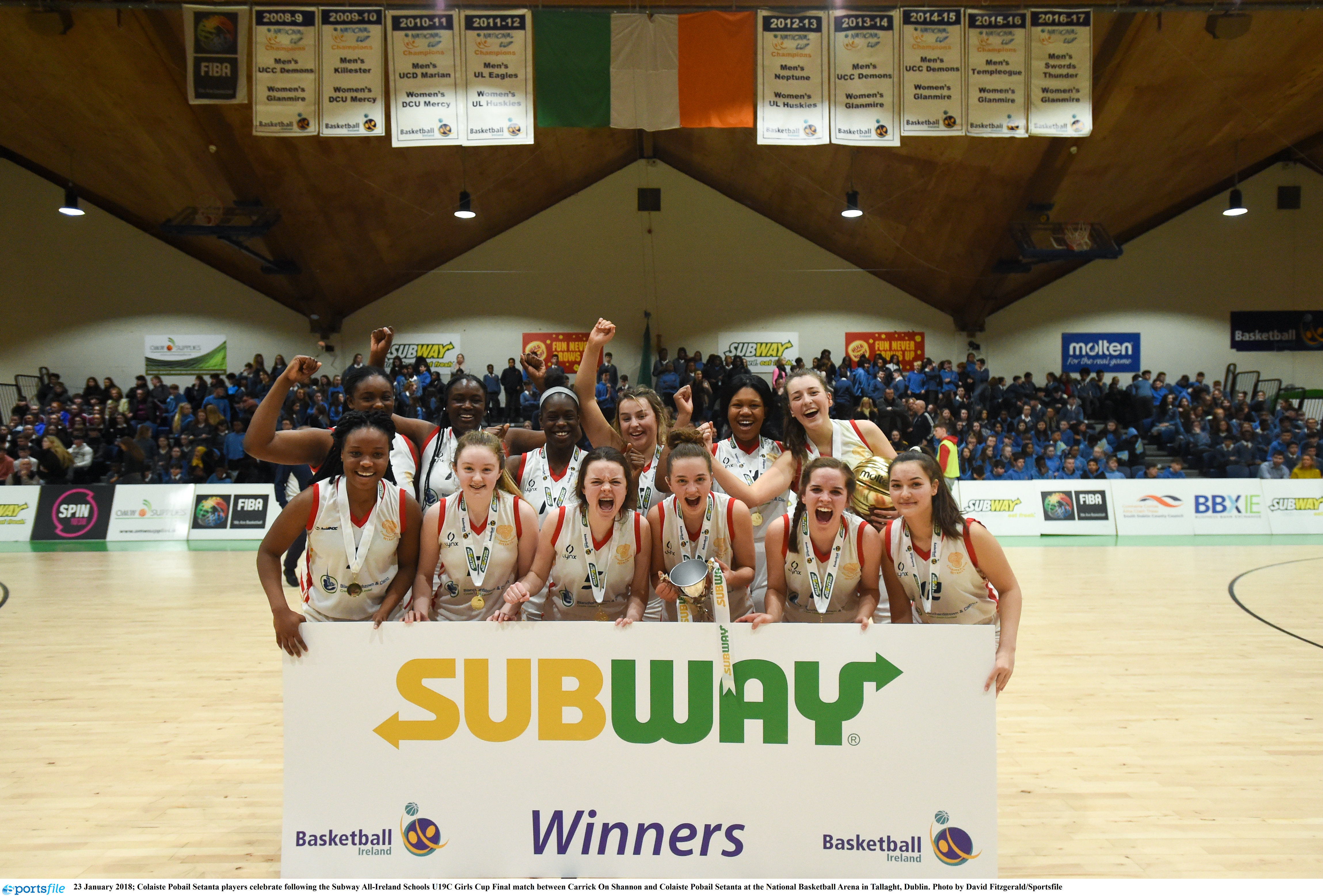 KATIE WILLIAMSON powered Colaiste Pobail Setanta home to a superb victory in the Under 19 C Girls final this morning as they won out 49-60 over Carrick On Shannon Community School at the National Basketball Arena in Tallaght.

Williamson, who starred for the Ireland Under 16 women’s team last summer, was certainly the star of the show for the Dublin school today as she put in a superb performance that included a whopping 30 points for her side. Strong displays all round from Setanta including Milica Stankovic on the point and Mary Jane Obijuru in particular found Williamson inside time and time again, and Carrick On Shannon were just unable to stop her.

For their part, Carrick put on a brilliant display of basketball, with Sara Crowe the leading light for her side, netting 21 points on the day and leading a superb comeback in the third and fourth quarters to almost steal the game from Colaiste Pobail.

A strong start to the game though was eventually what would keep victory assured for Setanta, as a 10 point quarter from Williamson saw them lead 10-19 at the end of the first, and despite brilliant basketball from Carrick’s Crowe, Clodagh Sheerin and Vivienne Egan at the other end, Setanta had opened the gap to 21-36 by half time.

The third quarter continued at frantic pace, with Carrick’s Crowe, Aisling Leahy and Egan putting the game to Setanta at every turn, and Crowe dug deep as the clock ticked down and added three vital baskets to close the gap to 37-44 at the end of the third.

That winning feeling @cpsetanta have won the U19 C Girls #SUBWAYSchools final 49-60 against Carrick on Shannon CS pic.twitter.com/RCkyH2txro

The game was far from over as a nervy fourth quarter ensued, and with just a minute gone, a superb score from Crowe narrowed the margin to just four points and it was officially game on. Williamson showed her style here though, and stepped up to the challenge in style, adding two quick baskets to settle Setanta’s nerves, and despite Egan’s and Crowe’s best efforts, Setanta held on to win out 49-60 in the end. 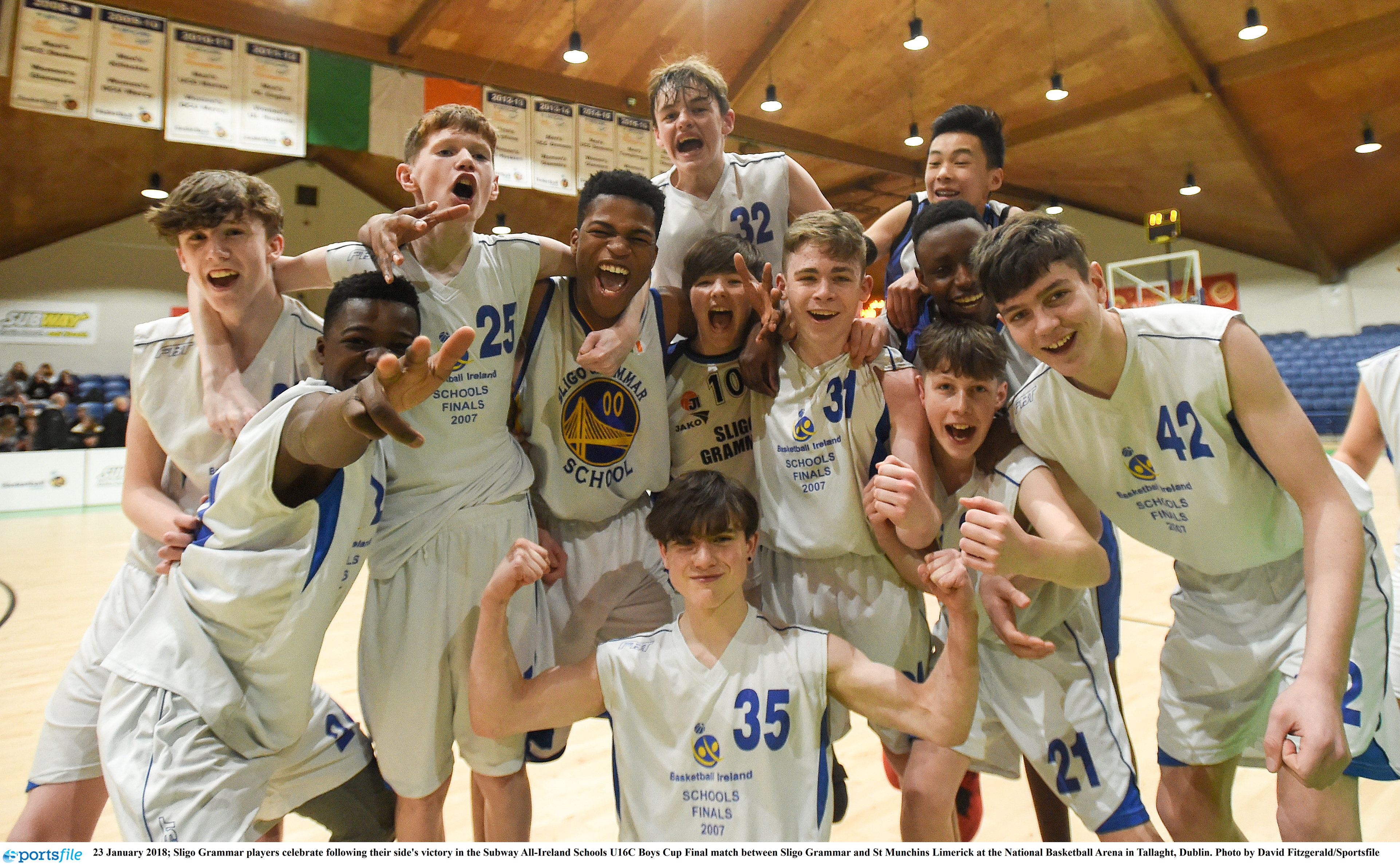 Sligo Grammar were crowned SUBWAY Schools All Ireland Under 16 C Boys champions this afternoon with a 50-43 point win over St Munchin’s of Limerick at the National Basketball Arena in Tallaght.

An MVP display from Sligo’s Divine Akude was one of the big talking points of the game, as he not only chipped in with 26 points, but was working hard under the boards at the other end to secure vital rebounds for his side.

St Munchin’s were led by the in-form Reece Barry and Josh Callanan, and despite a late comeback in the fourth quarter, just couldn’t close the gap enough to catch Sligo.

Akude and Mark McGlynn drove Sligo into an early lead at the end of the first, with good scoring and hard work on defense helping them to slow down the talent of Reece Barry. They continued to dominate in the second quarter, opening up a 28-14 point gap at half time, despite the best efforts of

A tough third quarter ensued, with Sligo going on a run to widen the gap to 32-19 midway through, but Munchin’s kept their heads up, and by the end of the third, were trailing by just eight.

The fourth is where they really hit their stride though, and superb displays from Callanan, Ben Barry and Reece Barry suddenly saw it back to a four-point game mid way though. Akude stepped up for Sligo and he, alongside McGlynn, Bosakani and Kehoe, kept the gap on the scoreboard ticking over until the final buzzer, to win out 50-43 in the end. 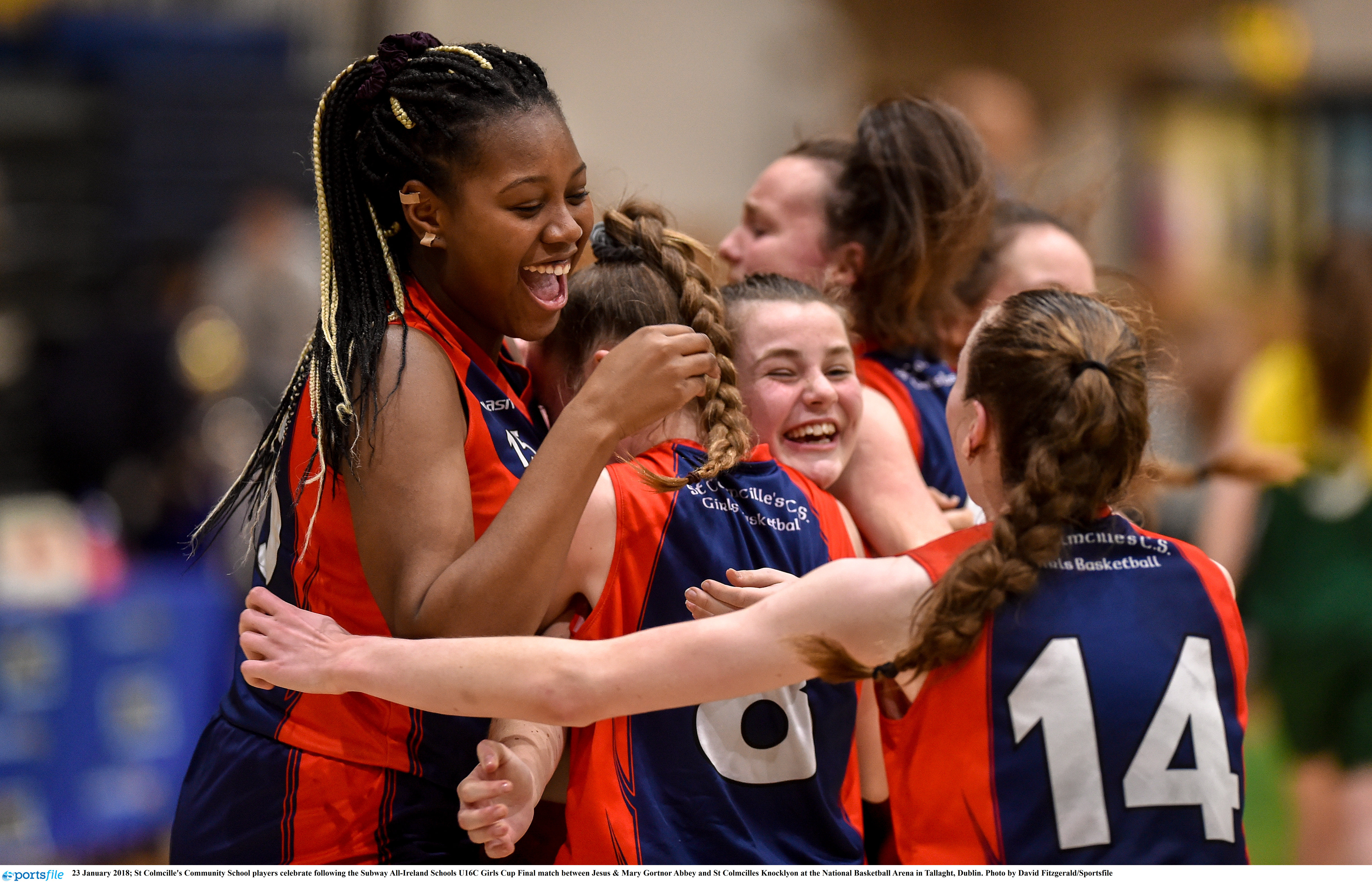 A superb display from Emma Mullins led St Comcille’s home to a memorable glory, as with 30 points and countless rebounds and assists, the talented young player was one of the shining stars on the court this afternoon.

Indeed, it was a great all round performance from the Knocklyon school, as they drove into a seven point lead at half time (17-24), with good scores from Abbey Stacey and Hannah Byrne helping to widen the gap. Strong performances at the other end meanwhile kept the score ticking over for Gortnor Abbey, with Caoimhe Walsh leading the way for her side, and Niamh Maughan causing problems for the St Colmcille’s defence.

And that’s the game as St Colmcilles CS take the win 35-46 in the #SUBWAYSchools U16 C Girls final pic.twitter.com/aVLbRFyyNP

A strong third quarter from the Knocklyon side though saw the gap open further (29-40) by the buzzer, and though Gortnor Abbey battled hard in the last, the margin was just a bit too much to close and Colmcille’s were crowned champions.