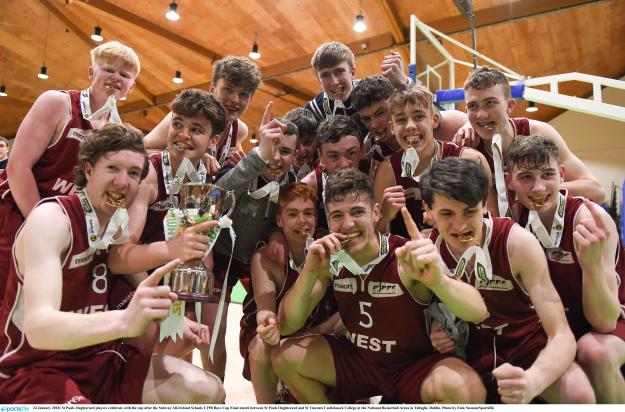 Subway Schools Under 19 B Boys final

It was a Paul Kelly masterclass at the National Basketball Arena in Tallaght this afternoon as the talented Moycullen teenager drove his side home to a comprehensive 69-52 victory over St Vincent’s Castleknock College in the Subway Schools U19 B Boys All Ireland Cup final.

Kelly, who has been making headlines for both his club and country over the last few years, was certainly the star of the show for St Paul’s Oughterard today as he opened his scoring in the first quarter in style and had 19 points under his belt before the quarter finished to put his side ahead 27-15.

Good scoring from Castleknock’s very impressive Lloyd Carolan and UG Roland Onuoha in the second quarter kept their scoreboard ticking over, but all eyes were on defense at that point and looking for a way to stop the unstoppable Kelly. Cian Monaghan and Matthew Tierney were on hand to add more buckets for the Galway side and they were leading well at half time, 47-23.

A dominant St Paul’s kept the tempo at a high pace in the third, with Ryan Monaghan adding more points to their tally, and Kelly and Cathal Walsh all producing good scores to lead, and Castleknock were dealt a blow as Carolan was fouled out of the game. Good baskets from David Nugent and Roland-Onuoha were not enough to close the gap though as St Paul’s led by 62-29 by the end of the third.

A well-deserved rest for Kelly as the fourth got underway, saw Castleknock get some good scores on the board early on, to make it 65-34 with six minutes to play. Good work on defense set them up for scores from Roland-Onuoha, Nugent and Ryan Monaghan and though Castleknock outscored St Paul’s by 23-7 in that final quarter, the mountain was just too big to climb and it was St Paul’s Oughterard who were crowned champions in the end, winning out 69-52.

WINNER WINNER! Congrats to St Paul's Oughterard once more on their U19 B Boys win this afternoon #SubwaySchools pic.twitter.com/hM4SHerpTp

SUBWAY Schools Under 19 B Girls final

A superb all-round performance from the Dublin school saw Lauren Devitt, Laura Furlong and Clodagh Cullen all impress hugely as the pressure mounted, while the Maguire dynamic duo of Erin and Enya at the other end were the big difference for Ulidia, and after trailing by 12 points at one stage, worked hard to close the gap back to just one point midway through the fourth quarter.

Loreto dominated most of the first two quarters, with Devitt and Sarah Coase leading the way on the scoring to send them into an early 17-8 point lead at the end of the first. 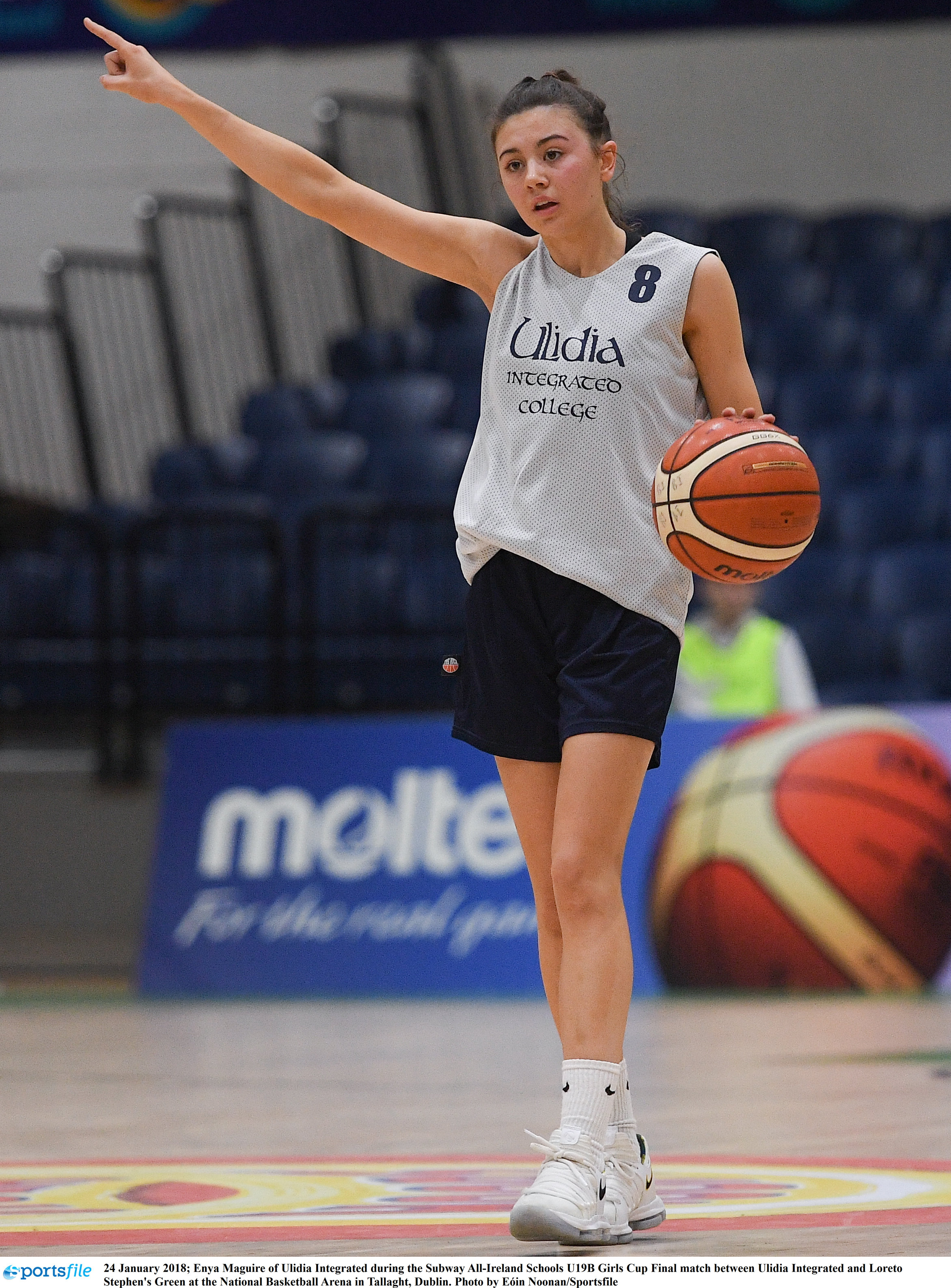 Super scoring from Enya Maguire from Ulidia kept their scoreboard ticking over, as she linked in with her sister Erin and Grace Kennedy to try and close the margin, but Loreto were still firmly in control, 31-19 at the half.

A brilliant third quarter followed as Ulidia came out of the dressing room all guns blazing, with Erin opening the scoring, before Enya added a superb three pointer and it was game on. Scores rained in from the two Maguires, with Kennedy chipping in for Ulidia as well, and suddenly the gap was back to 32-29 and Loreto had to look for some form of response.

Respond they did and do so in style, with Laura Furlong, Coase and Clodagh Cullen leading the charge, but the dynamic Maguire duo were unstoppable, and as the buzzer sounded, Loreto had just three to spare, 45-42.

The fourth quarter continued at the same frantic pace, and by the midway point, there was just a point between the sides (51-50) as the Maguires continued to mount the pressure.

Up stepped Devitt, Furlong, Sorcha McCahill and Cullen for Loreto Stephens Green and in front of an enormous crowd of supporters from their school began to battle hard, and started to edge the Dublin side in front. As the clock ticked down, they kept their cool and managed to get through the Ulidia defence for some vital scores, and despite a late – and fantastic – score from Enya Maguire, it was just too late and Loreto won out 69-54 in the end.

MALIK  Thiam was the star of the show for Galway;s Colaiste Einde as they drove home to a 45-31 point win over Colaiste an Spioraid Naoimh of Cork in the Subway Schools U16 B Boys All Ireland Cup final at the National Basketball Arena in Tallaght this afternoon.

A 20-point display from the talented young student was brilliantly supported by a very strong performance from team mate James Webb who chipped in with 15 points on the day.

It was the Cork team who got off to the better start as proceedings got underway at the Arena, with good scoring from Nathan Kruschke and Patrick Reidy getting Spioraid Naoimh off the mark early on to take an 8-9 lead going into the second quarter.

Colaiste Einde found their stride in the second though, and soon edged in front, opening a 14-11 point gap by the midway point.  Hard work from AJ Garrucho and Kruschke for Spioraid Naoimh saw them try and close down the offensive threat of Thiam, but Einde held the lead 20-15 at half time.

This game was far from over though as once more, Spioraid Naoimh battled under the boards, and with four minutes left on the clock, had closed the gap back to just one point again. It stayed neck-in-neck throughout the quarter with Webb and Thiam on target for Einde, while Jordan Ukah, Kruschke hit the mark for Spioraid Naoimh to leave Colaiste Einde up by just three at the third buzzer, 27-24.

Einde were not giving up their lead easily though, and a superb fourth quarter display from Thiam, Webb and Uyiosa put them into a stronger position down the stretch to win out 45-34 in the end.

Subway Schools Under 16 B Girls final

Presentation Secondary School Tralee were crowned Subway Schools Under 16 B Girls All Ireland Cup champions with a 33-28 point win over Muckross Park College at the National Basketball Arena in Tallaght this afternoon.

A super performance from Mary O’Connell was the foundations of their win as, in the face of a fourth quarter comeback from Muckross Park, O’Connell was on hand to get the vital scores to keep her side in front.

The first quarter was nip and tuck as both teams fought hard to get a foothold in the game. Fiona Clune was leading the way for Muckross with some fantastic work drawing fouls from the Pres defense. Clune got to the free throw line regularly and her eight first quarter points were the difference between the sides as Muckross led 12-8 after the first.

The second quarter saw Pres settle into the game much more. They were able to limit Muckross inside and scores were becoming easier to find. Led by Mary O’Connell’s seven 2nd quarter points, a four-point deficit going into the quarter was reversed and Pres suddenly had a three-point lead going into the second half.

The third quarter was a cagey affair with both teams finding baskets difficult to come by. The low scoring suited Pres who were able to maintain their slender advantage and lead 26-22 after three quarters.

The crowd’s impact grew throughout the fourth quarter as both sets of fans urged their schools on to victory. Every basket was met with a ferocious roar and there was nothing to separate the teams. A free throw from Emer Bradly narrowed the lead to just three points but Pres had an answer in Mary O’Connell who hit a huge basket to put her team up five points with just over a minute to go in the game. Muckross had chances but good defense and rebounding from Pres saw them close out the game 33-28 in the end.

Just over a minute left in the U16 B Girls #SubwaySchools final and it's @MuckrossCollege 28 Presentation Tralee 33. pic.twitter.com/ysWRDWT21M