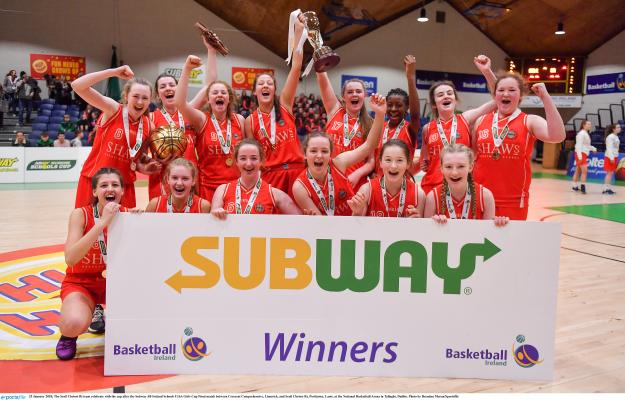 Colaiste Chiarain Leixlip are the 2018 Subway All Ireland U19A Girls champions after a dazzling display in Tallaght this afternoon which exploded into life early on and was a superb exhibition of high-scoring basketball.

Both schools had huge support from their vocal supporters and the game kicked into life immediately with Colaise Chiarain racing into an early 8-2 lead courtesy of some fantastic scores from Fatimah Akorede.

Christ King were struggling to break down their opponent’s zone defense and with the Leixlip side’s height on the inside, there were very few second chance opportunities for the Cork team and, at the end of the first quarter, Colaiste Chiarain led 21-11.

The second quarter started positively for the Leesiders as captain Ciara Kelly got them off the mark with a lovely inside finish. Leixlip had a response though in what would become the story of the game as Irish international Ciara Bracken struck from long range, but with Liffey Celtics star Sorcha Tiernan in foul trouble, the game was very much in the balance at half time 38-29.

The third quarter was ultimately where the two sides were separated for good. Five long range three pointers from Ciara Bracken and another from Sorcha Tiernan saw Colaiste Chiarain open a commanding lead. Despite the best efforts of Aine Fitzgerald and a superb display from Alanna Braham for Christ King scores were proving much more difficult for the Cork girls.

In the fourth quarter Ciara Bracken continued her MVP performance with two more three pointers that took her total of the game to an incredible nine three pointers on her way to a 32 point performance. She wasn’t alone of course and her teammates Ciara Mulleady and Caoimhe and Niamh Masterson were also a big help in delivering the title to Leixlip.

Colaiste Chiarain’s class shone through throughout the game and they ultimately won out 93-62. Huge credit goes to both schools for the amazing vocal support their travelling supporters brought to Tallaght.

Subway Schools Under 16 A Boys final

CJ Fulton had the crowd on their feet in the National Basketball Arena in Tallaght this afternoon as he netted a whopping 47 of his side’s 62 points in the Subway Schools Under 16 A Boys Cup final.

It was a shooting exhibition from Fulton with 45 of those points coming from a massive tally of 15 three-pointers – an absolutely incredible feat.

For St Malachy’s Belfast it was a day they’ll never forget as they stormed to a 62-46 point win over St Mary’s CBS The Green (Tralee), who just had no answer for the fire of Fulton.

That’s the game and what a game it was!!! St Malachys Belfast are #SubwaySchools U16 A Boys champions with a 62-46 point win over St Mary’s CBS The Green today - CJ Fulton with 47 POINTS! (15 three pointers!!!!) pic.twitter.com/eYxwNq3OxE

The opening quarter was nip and tuck between the two schools, with Rapolas Buivydas dominating for Tralee, getting in some early scores to keep them neck-in-neck with Malachy’s. However, six of Fulton’s three pointers were to come in this quarter and unable to keep him under control, Malachy’s held a 28-15 point lead by the first buzzer.

And it didn’t stop – it rained threes for Malachy’s for the remainder of the game, with Conor Eastwood adding a good score early on, but the first half (and indeed, the entire game) belonged to Fulton, who finished the second quarter with 33 points to his name – all 33 coming from 11 three-pointers – to see his side ahead 43-23 going into the third.

Again, it was Buivydas who continued to be a handful for the Malachy’s defence as the third quarter got underway, and brilliant link up play with Niall Fitzmaurice and Darragh Broderick saw some great scores for the Tralee school as Warriors hero, Kieran Donaghy cheered them on from the sidelines.. A much closer affair ensued in the third, with the sides matching each other score for score, but Malachy’s still had a big margin going into the last 57-35 to the good.

Another top class display from Fulton throughout the end saw him finish the game out with 15 three-pointers in total, and there was no question in anyone’s mind as to where the MVP award was going as Malachy’s ran out 62-46 point winners.

Scoil Chriost Ri Portlaoise were crowned Subway Schools Under 16 A champions for the second year in-a-row this afternoon with a comprehensive 68-36 point win over Limerick’s Crescent Comprehensive.

An MVP display from Portlaoise teen Shauna Dooley was the driving force behind the school’s back-to-back wins, and she, along with Sarah Fleming, Grainne O’Reilly and Ciara Byrne proved to be too much for Crescent Comprehensive.

A tough and competitive first half though kept fans on the edge of their seats as strong scoring from Crescent’s Aoife Morrissey and Tara Nealon kept the game neck-in-neck early on. For Portlaoise though, Dooley finished the quarter with some good scores to see them ahead 14-9 at the end of the first.

More tough work from Crescent in the second quarter kept the intensity high, with Nelaon and Sophie Moore again proving to be tough to guard for Chriost Ri, but again, Dooley and Fleming were on hand for Portlaoise to extend the lead, and by the half, they were up 29-18.

It was the third quarter where Portlaoise really stamped their authority on the game though, with Grainne O’Reilly and Fleming dominating the scoring for Portlaoise. Jasmine Burke hit her stride too and soon the margin had opened up to 52-20 heading into the third.

Another tough battle ensued in the fourth but the mountain was too big to climb for Crescent Comprehensive and Scoil Chriost Ri were crowned champions on a final scoreline of 68-36.