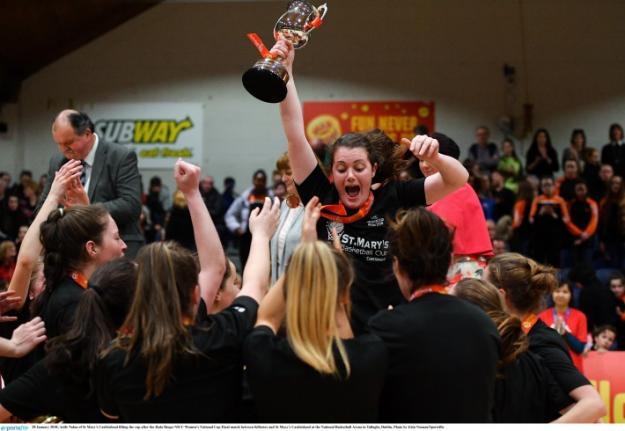 The Hula Hoops NICC Women’s National Cup is winging its way to Co. Kerry this afternoon as St Mary’s Castleisland put in a dominant final performance to overcome Pyrobel Killester 71-54 in the decider.

A super high-scoring display from Denise Dunlea was one of the big differences between the sides as she dominated at both ends of the court, but had a strong and talented support network around her.

A bright start from the Kerry side saw them drive into an early 21-10 point lead at the end of the first, with gritty defence the story of the opening 10 minutes. They continued to impress in the second, with Lorraine Scanlon also on form and carving open the Killester defence. It wasn’t all easy for them though, as Ali Connelly and Catriona White were on target for Killester with some good shooting, and they battled hard to keep the scoreboard ticking over. St Mary’s were still leading strong at the half though, 41-24.

A much more evenly-matched third quarter followed, with White and Niamh O’Donovan shining brightest for Killester and slowly, they began to chip into Castleisland’s lead. Again, it was Dunlea who led the charge for St Mary’s and by the end of the third, it was stretched back out to a 20-point margin once more (58-38).

St Mary’s continued to impress throughout the fourth and, despite the brilliant shooting dispaly from White and O’Donovan, the mountain was just too steep to climb and the Kerry team won out 71-54 in the end.

Blue Demons retained their NICC Men’s Cup title for another year on Saturday morning, as they overcame BC Leixlip Zalgiris in an enthralling final at the National Basketball Arena.

MVP Liam Carmody provided a shooting masterclass as he proved valuable on both sides of the basket, while Dalius Tomosauskis and Marzvydas Cepliauskas once more putting in a solid performance for Leixlip making sure to always keep their side within 10 points. As both sides battled it out for the first two quarters, Troy O’Mahony’s game plan to force Zalgris wide and to take mid-range shots was working, despite Zalgris’s greatest efforts, the shots were not dropping. A fast break from Ryan Murphy in the final seconds of the first quarter saw Blue Demons finish ahead 22-17.

The second quarter started with the same tenacity and aggression as the first with a hot start and hot hands from Shane McCarthy saw Demon’s netting a cool 8 points before the first minute was up, forcing Zalgris to call an early timeout to allow them to compose themselves. It wasn’t until the third quarter that Blue Demon’s lead started to become just out of reach of the Leixlip side with two dagger three’s from Shane Coughlan with just two minutes to go saw the side 16 points up.

For Demons it was a clinical finish in the end, as thy opened up a 77-51 point gap, and they ran out eventual 82-69 point winners to take the trophy for the second time in a row.

Ballybrack Bulls were crowed champions of the Hula Hoops Wheelchair Basketball Cup as they rolled to victory with a 58-62 point win over Killester, in what can only be described as a fantastic display of wheelchair basketball.

There was no love lost in this smashing Dublin derby as south met north for the first time this weekend in the National Basketball Arena. Valene Ryan of Ballybrack Bulls was first to get her name on the scoresheet with some slick shooting however it was swiftly responded with a lay-up from Killester’s [SH1] Mark Cunningham. From the get go, Ballybrack pressed hard with an aggressive defence while the deadly team-up of Cole and Hayes manged to keep Killester down four at the end of the first.

The second quarter saw an all out battle between Cunningham and Hayes as they both put on a superb shooting display, both ending the half with 14 of their own. Killester, reacting to their deficit, decided to switch up their defence to a two-man press which somewhat stunted the Bulls run as they ended the half five points up on 25-30.

The third quarter continued with the same grit and determination as the game had initially set out with both teams battling hard on both ends of the court.  Killester began to scramble as it seemed that Ballybrack’s strength, athleticism and awareness on the court proved too much for them, adding the pressure of moving onto team fouls with just three minutes to go.

However, the fate of this game was undecided until the final seconds as Killester fought back and began to close the marginal gap, clipping the heels of Ballybrack Bulls. Paddy Forbes putting in a stunning performance drove hard at the basket and levelled up the game with less than a minute to go. Ballybrack didn’t let this faze them as Valene Ryan focused her eyes on the prize and responded with a score of her own, closely followed by Jack Shannon Coyle to close out the game 58-62.