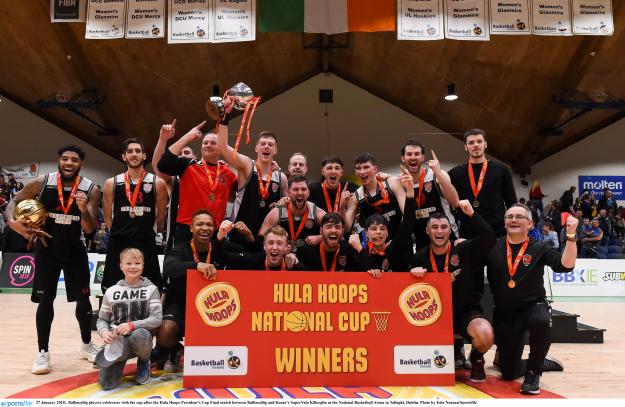 A game of last-gasp shots, of closing seconds, of passion, sheer grit, determination and glory. Those are just some of the words that can sum up an absolutely incredible finale to the 2018 Hula Hoops National Cup finals weekend as DCU Mercy completed an incredible treble of wins at the National Basketball Arena this evening when they overcame Ambassador UCC Glanmire by just one point, 72-71.

Super score from Maguire again - this game is a MUST WATCH #HulaHoopsCup pic.twitter.com/VTD8TUSE69

“Am I dreaming? To win by a point?! Nobody even imagines that in Cup finals,” said a dazed and emotional captain and MVP Sarah Woods after she put in a superb 21-point performance. “We’ll never forget this moment. It’s been a while for the likes of myself and Aisling Sullivan – and for us to lift the cup together was extra special.”

A while indeed, as it was 2011 when DCU Mercy last lifted the Women’s National Cup but now, in 2018, they have not only lifted it following an absolutely thrilling game against a five in-a-row chasing Glanmire – but they lifted it along with the Under 18 and Under 20 women’s Cup titles too. This evening’s game dished up everything a fan could hope for in a Cup final on the marquee weekend of the Irish basketball calendar.

Timeout called with 33 seconds to play. @dcumercy are up 2 but @GlanmireBBall have Prim in the free throw line. 72-70 pic.twitter.com/ZAVKqPXnNN

The lead changed hands 12 times over the forty minutes, with the Dubliners edging clear in the dying minutes. Ashley Primm’s three-point attempt on the buzzer would have given Glanmire their fifth Cup title in a row and the story we tell now could have been oh so different.

“That could have gone in,” agreed winning coach, Mark Ingle. “In fact, I thought the game was level and then they all started shouting and screaming and I looked up at the board and realised we had won! I had been planning the next play, telling the players where to go!”

Indeed, the intensity was there right from tip-off and it was obvious by the end of a close and tense first quarter that this game was going to live up to and exceed all expectations as DCU took a 19-16 lead at the end of the first. Woods, Tiffany Corselli, Alex Masaquel and Rachel Huijsdens were all hugely instrumental in a win that will last in the memory for a long time, and it was the defensive intensity of all three Mercy teams this weekend that was truly the hallmark of all of their wins this weekend.

Glanmire served up their own magic, with Claire Rockall and Ashley Primm lighting the fuse at the end of the second quarter, and the bomb went off when Casey Grace drained a 20-footer for her first basket of the game. It capped a 13-0 run and gave them a 37-35 lead at half time.

Mark Ingle had ten minutes to let the smoke clear and DCU went back to work in the third but Glanmire’s lead was still 59-54 heading into the fourth - Puerto Rican international Adily Martucci had chipped in a seven-point quarter while Dwyer locked up her double-double.

DCU Mercy were behind twice in the last five minutes and it was Under 20 captain Aoife Maguire who got the vital baskets to swing momentum. Defeat and glory in basketball are millimetres apart. Today it was DCU Mercy’s turn to get their measurements right.

“This is all I wanted and everything I dreamed of,” said an overcome Black Amber Templeogue star, Lawrence (Puff) Summers this evening as his side were crowned Hula Hoops National Cup champions with a 68-62 point win over UCD Marian at the National Basketball Arena this evening.

“I lost a final with Kilkenny here four years ago,” he continued, “and I have a photo of my daughter crying because Daddy lost. I can’t wait to go home and put this medal around her.”

Indeed, the huge win for Templeogue over their south Dublin rivals this evening saw them complete a memorable double of Cup wins in one day, with their Under 18s overcoming Neptune in their decider earlier in the day. In the big showdown this evening though, UCD threatened to take the lead with less than a minute remaining, but two vital steals from veteran Michael Bonaparte stemmed their momentum and MVP Lorcan Murphy - who took the game high with 23 points - broke clear with an opportunity to slam his first dunk of the game in the dying seconds, but elected to fire the ball into the rafters of the National Basketball Arena in sheer joy as his side enjoyed their second title in three years.

The south Dublin rivals were uncompromising on defence and gave up just 27% of 33 shots in the first quarter. Flashes of skill came from Neil Randolph taking Mike Garrow on the outside while Luke Thompson’s triple gave Templeogue a healthy lead.

Lorcan Murphy also had a bright start – adding outside shooting to his renowned aerial ability for a 16-9 advantage for the first quarter. He went on to claim the MVP trophy and 23 points.

Things opened up in the second period with UCD Marian knocking down 21 points. Conor Meany grew into the game, Dan James connected from down town and Mariusz Markovicz scored three points the old fashioned way.

Jason Killeen picked up six points from the free-throw line and had one rousing block on Dan James, but Marian had the score back to 32-30 by half time with Neil Baynes scoring well inside.

Three of UCD Marian’s squad were chasing a second cup medal to add to their 2011 victory. The trio of James, Baynes and Meany combined to get the sides level at 36-36 in the face of Jason Killeen’s double-double and Bonaparte’s outside shooting.

Conor Meany’s three-pointers were crucial to Marian but the last say of the quarter went to Baolach Morrison. The young guard came into a star-studded line up when he graduated from Templeogue’s prolific youth setup, yet has continually earned minutes among Americans and senior internationals. A 50-45 lead heading down the stretch came courtesy of his end-of-quarter triple.

And it’s all over! @templeogue_bc are #HulaHoopsCup Pat Duffy Champions 2018 - doing the double with their U18 team! pic.twitter.com/19eevrRyLT

Still UCD Marian refused to bow to the 2016 champions. More baskets from Meany, James and Baynes had reeled in a 10 point deficit to just three points with 02:30 on the clock. This wasn’t a classic, but you couldn’t take your eyes off it.

“UCD are first in the league for a reason but we believed in each other and got the job done,” said Summers.

Ballincollig captured their first ever national title with a 69-64 over Keane’s Supervalu Killorglin in the Hula Hoops Presidents Cup Final at the National Basketball Arena.

The sides were level three times in the fourth quarter alone, but 11 points in those ten final minutes from Cameron Clark and a vital block from Ronan O’Sullivan with 15 seconds left sealed the win.

Killorglin could consider themselves unlucky to be up against a 29 point performance from MVP Clark. In their first appearance at this level, Darragh Jones’ work on the boards and some fine passing from Declan Wall and Ian McLoughlin sent this game to the wire.

For Ballincollig, the promise is that there’s more to come. “Watch out world,” says winning Head Coach Kieran O’Sullivan.

“Cameron Clark showed why he’s the best player in the country – he’s an absolute star,” he said. “We’re over the moon with our first title.”

“There’s a platform there and we’re not finished yet. We want to do a lot more. You see the calibre of players that we have here. This is just the beginning.”

The running battle between Kevin Gray and Clark was a feature of the first quarter. Gray’s back-to-back triples got Killorglin into the game, but Clark took over on the next possession - swatting away Gray’s lay-up before running the loose ball down the floor and pulling up for three points. Gray failed to score for the rest of the half.

Daniel Jokubaitis hauled Killorglin back into contention. The in-form Lithuanian scored scored seven points of an 11-0 run including the go-ahead two midway through the second quarter. He finished with 27 points.

Still his side trailed 33-24 at the turnaround. Ciaran O’Sullivan made his first basket of the game and Clark finished the half with 13 points.

Ballincollig had little cause for concern when the Kerry fans cheered for Jakubaitis to dunk the ball unopposed early in the third. Jakubaitis obliged but the score was still 38-25. Six minutes later the Kingdom faithful went into overdrive as Kevin Gray put Killorglin 46-45 in front - Ivan Bogdanovic’s double-double was instrumental in the comeback.

It was the Cork fans’ turn to raise the roof when Ciaran O’Sullivan levelled the game from the three-point line. Killorglin were going nowhere and the game was far from won.

“We knew it was going to be a dogfight,” said Kieran O’Sullivan. “I predicted this before the game. They came back strong they are a fantastic team, but we dug deep.”

Fr Mathews stormed home to their first ever Senior Women’s National Cup title at the National Basketball Arena in Tallaght, with a 55-45 point win over Meteors in the big decider.

A Niamh Dwyer-inspired comeback at the very end of the third quarter saw her side make an 18-point turnaround.

“This is absolutely massive for the club to win our first title. We had two bus-loads come up to make sure we had the support,“ said a delighted Niamh Dwyer.

“When you’re struggling offensively, it’s the little things that make the difference. Emma’s huge three Hollie’s defence and Kellie’s free throws after pulling down those rebounds. She’s not the tallest player in the world, but I certainly wouldn’t like to get in a fight with her.”

The first quarter saw scores at a premium as both teams took some time to find a rhythm as the turnovers were high and the scores were low. Nevertheless, they still managed to supply the large and noisy crowd with an edge of the seat game. Meteors were the ones to get first off the mark early on, and when Eimear Mairtin knocked down a long range shot minutes later, they had opened up an 8-2 lead.

Fr Mathews were under pressure to keep the gap from going to double figures but an stand-out display from Emma Gallagher saw her respond with a big three of her own. This injection of life was needed and Fr Mathews’ Ashley Cunningham followed up with a block and quick pass to Hollie Herilhy driving to the basket to bring it back to a two-point game. Meteors quickly responded with scores of their own but a three-pointer from Olivia Dupuy saw the game turnaround in the space of 36 seconds from a seven points deficit, to just one.

The second quarter started with the same fierceness with Gallagher supplying a masterclass in shooting. It wasn’t until the final minutes of the third, as Meteors started to build an eight-point lead that the Niamh Dwyer fire power really shone through. The combination of Dwyer and Gallagher gave Igor Petrovich’s side slim pickings as the duo worked hard defensively and Niamh began to attack the basket aggressively to get some vital scores for her team. The final blow to Meteors came from a behind the head pass from Dwyer to Herlihy who made her way to the basket stretching the gap to 10 points. It was too much of an ask for Meteors to come back from and Fr Mathews ran out winners.