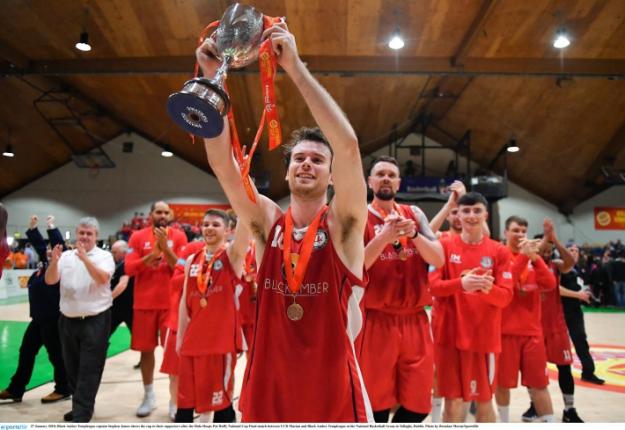 “This is all I wanted and everything I dreamed of,” said an overcome Black Amber Templeogue star, Lawrence (Puff) Summers this evening as his side were crowned Hula Hoops National Cup champions with a 68-62 point win over UCD Marian at the National Basketball Arena this evening.

“I lost a final with Kilkenny here four years ago,” he continued, “and I have a photo of my daughter crying because Daddy lost. I can’t wait to go home and put this medal around her.”

Indeed, the huge win for Templeogue over their south Dublin rivals this evening saw them complete a memorable double of Cup wins in one day, with their Under 18s overcoming Neptune in their decider earlier in the day. In the big showdown this evening though, UCD threatened to take the lead with less than a minute remaining, but two vital steals from veteran Michael Bonaparte stemmed their momentum and MVP Lorcan Murphy - who took the game high with 23 points - broke clear with an opportunity to slam his first dunk of the game in the dying seconds, but elected to fire the ball into the rafters of the National Basketball Arena in sheer joy as his side enjoyed their second title in three years.

And it’s all over! @templeogue_bc are #HulaHoopsCup Pat Duffy Champions 2018 - doing the double with their U18 team! pic.twitter.com/19eevrRyLT

In the Men’s President’s Cup meanwhile, Ballincollig captured their first ever national title with a 69-64 over Keane’s Supervalu Killorglin this afternoon. The sides were level three times in the fourth quarter alone, but 11 points in those ten final minutes from Cameron Clark and a vital block from Ronan O’Sullivan with 15 seconds left sealed a win that will not be forgotten in the club for many years to come. Having entered the National League just this year, Ballincollig’s journey to club glory this evening is certainly one to savour and, an MVP display from Clark along with determination, grit and sheer will, got them over the line in the end - and now, the promise is that there’s more to come.

“Watch out world,” said winning Head Coach Kieran O’Sullivan. “Cameron Clark showed why he’s the best player in. This is just the beginning.”

Earlier in the day, Templeogue Under 18 Men’s team also stormed home to National Cup glory as they closed out a thriller against Neptune. This game was also in the melting pot right up until the closing seconds as Neptune came back from a 10-point deficit at the end of the third quarter to tie the game level at 64 points, but leadership from Templeogue’s Kris Arcilla in the dying seconds saw him keep cool, calm and collected from the free throw line to close out a 72-68 point victory.

Meanwhile, DCU Mercy’s domination of underage basketball continued this afternoon as their Under 18 side claimed their second Hula Hoops Women’s Cup in less than 24 hours with a 74-42 win over Brunell. For today’s winning coach Damien Sealy, credit belongs with a very special group.

“It all comes down to the girls,” he said. “There wouldn’t be a club without them and they showed how good they were today. Some of our best players never knew what it was like to win at underage. Now some of them don’t know what it’s like to lose.”

In the first game of the day meanwhile, Blue Demons held onto their NICC Men’s Cup title for another year as they overcame BC Leixlip Zalgris in an enthralling final. MVP Liam Carmody provided a shooting masterclass as he proved valuable on both sides of the basket, while Dalius Tomosauskis and Marzvydas Cepliauskas once more putting in a solid performance for Leixlip making sure to always keep their side within 10 points.

Game continue tomorrow at the National Basketball Arena in Tallaght.