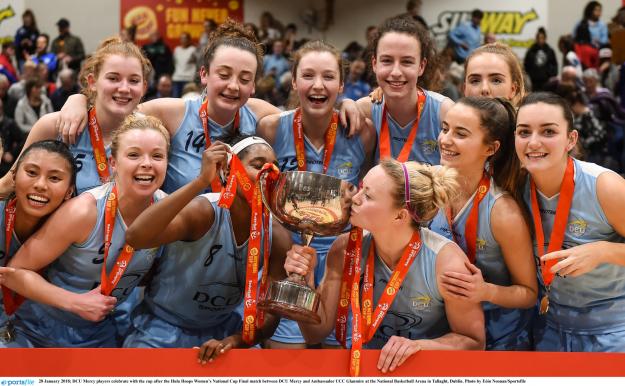 A game of last-gasp shots, of closing seconds, of passion, sheer grit, determination and glory. Those are just some of the words that can sum up an absolutely incredible finale to the 2018 Hula Hoops National Cup finals weekend as DCU Mercy completed an incredible treble of wins at the National Basketball Arena this evening when they overcame Ambassador UCC Glanmire by just one point, 72-71.

“Am I dreaming? To win by a point?! Nobody even imagines that in Cup finals,” said a dazed and emotional captain and MVP Sarah Woods after she put in a superb 21-point performance. “We’ll never forget this moment. It’s been a while for the likes of myself and Aisling Sullivan – and for us to lift the cup together was extra special.”

A while indeed, as it was 2011 when DCU Mercy last lifted the Women’s National Cup but now, in 2018, they have not only lifted it following an absolutely thrilling game against a five in-a-row chasing Glanmire – but they lifted it along with the Under 18 and Under 20 women’s Cup titles too. This evening’s game dished up everything a fan could hope for in a Cup final on the marquee weekend of the Irish basketball calendar.

The lead changed hands 12 times over the forty minutes, with the Dubliners edging clear in the dying minutes. Ashley Primm’s three-point attempt on the buzzer would have given Glanmire their fifth Cup title in a row and the story we tell now could have been oh so different.

“That could have gone in,” agreed winning coach, Mark Ingle. “In fact, I thought the game was level and then they all started shouting and screaming and I looked up at the board and realised we had won! I had been planning the next play, telling the players where to go!”

Indeed, the intensity was there right from tip-off and it was obvious by the end of a close and tense first quarter that this game was going to live up to and exceed all expectations as DCU took a 19-16 lead at the end of the first. Woods, Tiffany Corselli, Alex Masaquel and Rachel Huijsdens were all hugely instrumental in a win that will last in the memory for a long time, and it was the defensive intensity of all three Mercy teams this weekend that was truly the hallmark of all of their wins this weekend.

Sarah Woods draws the game level at 50-50 with 2.28 to play Q3 #HulaHoopsCup pic.twitter.com/0crvX9pyGr

Glanmire served up their own magic, with Claire Rockall and Ashley Primm lighting the fuse at the end of the second quarter, and the bomb went off when Casey Grace drained a 20-footer for her first basket of the game. It capped a 13-0 run and gave them a 37-35 lead at half time. Mark Ingle had ten minutes to let the smoke clear and DCU went back to work in the third but Glanmire’s lead was still 59-54 heading into the fourth after Adily Martucci chipped in a seven-point quarter while Dwyer locked up her double-double. DCU Mercy were behind twice in the last five minutes and it was Under 20 captain, Aoife Maguire who got the vital baskets to swing momentum. Defeat and glory in basketball are millimetres apart. Today it was DCU Mercy’s turn to get their measurements right.

In the Senior Women’s Cup final meanwhile, Fr Mathews stormed home to their first ever Women’s National Cup title with a 55-45 point win over Meteors in the big decider. A Niamh Dwyer-inspired comeback at the very end of the third quarter saw her side make an 18-point turnaround and that, coupled with a superb display from Emma Gallagher, was the talk of another brilliant final. “This is absolutely massive for the club to win our first title. We had two bus-loads come up to make sure we had the support,“ said a delighted Niamh Dwyer. “When you’re struggling offensively, it’s the little things that make the difference. Emma’s huge three, Hollie’s defence and Kellie’s free throws after pulling down those rebounds. She’s not the tallest player in the world, but I certainly wouldn’t like to get in a fight with her.”

The Hula Hoops NICC Women’s National Cup meanwhile is winging its way to Co. Kerry this afternoon as St Mary’s Castleisland put in a dominant final performance to overcome Pyrobel Killester 71-54. A super high-scoring display from Denise Dunlea was one of the big differences between the sides as she dominated at both ends of the court, but had a strong and talented support network around her. St Mary’s led well at the half, but a much more evenly-matched third quarter followed, with Catriona White and Niamh O’Donovan shining brightest for Killester and slowly, they began to chip into Castleisland’s lead. It was Dunlea though who led the charge back for St Mary’s stretched out their lead to win in style in the end.

The opening game of the day really laid the marker for the games to follow though, as Moycullen and KUBS also served up a thriller in the Under 20 men’s final. KUBS made up for the hurt of losing last year’s final by running out 68-65 point winners in the end, but it was a game that was in the melting pot right up until the final buzzer. There were stars all over the court for both of these talented teams, as Moycullen came back from a 15-point deficit thanks particularly to Paul Kelly and James Connaire, but MVP Eoin McCann wasn’t losing this one without a fight, and they managed to hold on to victory. ENDS Note to Editors: Please see today’s results below, with full reports available on www.basketballireland.ie Hula Hoops Women’s National Cup final DCU Mercy v Ambassador UCC Glanmire, 17.30 Hula Hoops Senior Women’s Cup final Fr Mathews 55-45 Meteors Hula Hoops Under 20 Men’s National Cup final Moycullen 65-68 KUBS Hula Hoops NICC Women’s National Cup final Pyrobel Killester: 54 St Mary’s Castleisland: 71