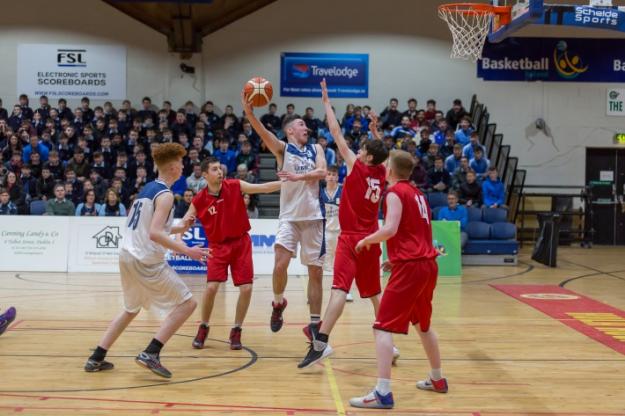 The All Ireland Schools League finals will take centre stage at the National Basketball Arena in Tallaght next week, with teams from across the country competing at Under 16 and Under 19 levels.

Games will get underway with a bang on Monday, February 26th, as the hugely-anticipated Under 19 A girls final tips off at 11am between Holy Faith Clontarf and Colaiste Chiarain of Leixlip. These sides are no strangers to each other down through the years, with Leixlip most recently getting the better of Holy Faith in the Subway Schools All Ireland Cup semi-final. Colaiste Chiarain went on to win the Cup final in style and will be hoping that they can do the double in All Ireland titles on Monday. Holy Faith have a strong history in this competition though, having been crowned champions in 2016 and scooping a three-in-a-row from 2012 to 2014, teeing up a very interesting final indeed.

The Under 19 A Boys final tips off directly afterwards, and sees St Joseph’s College (The Bish) of Galway face off against Intermediate School Killorglin. The Bish have had a good run in both schools league and cup over the years, but face a tough challenge in a determined Kerry side.

The Under 16 A games are set to be just as competitive, with Kerry’s Scoil Phobail Sliabh Luachra of Rathmore facing off against Cork rivals Scoil Mhuire Gan Smal Blarney in the Boys’ final at 2pm on Wednesday. Both teams will be hoping to make their mark on a competition that has been dominated by St Malachy’s of Belfast in recent years.

In the Under 16 A girls final meanwhile, Scoil Chriost Ri of Portlaoise will be hoping to make it a double of wins on Thursday, as they scooped a back-to-back Under 16 Cup trophy in January and will be hoping to add more silverware to the cabinet. They face a very tough battle though as they go head-to-head with reigning league champions, Presentation Secondary School of Castleisland.

Games will run from Monday to Thursday at the National Basketball Arena, and will also see a rescheduled Subway Schools Cup final on Tuesday in the Under 19 C boys, as St Brendan’s of Belmullet prepare for a final showdown against St Colmcilles, Knocklyon.