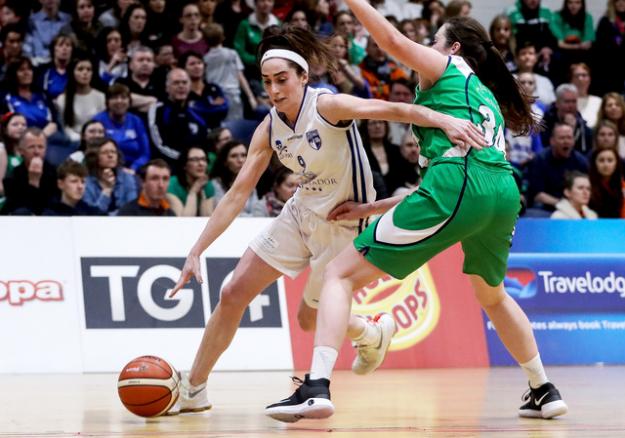 Goran Pantovic of Garvey’s Tralee Warriors was the toast of the kingdom on Saturday night as he finished a sharply delivered hook shot over the heads of Griffith College Swords Thunder to secure a memorable one-point win for the Warriors.

In a thrilling finish to one of the big clashes of the weekend, Pantovic’s late, late basket saw them win out 75-74 to leave them tied on points at the top of the Men’s Super League table with UCD Marian, who lost their one-game cushion when they were defeated by Belfast Star on Friday night.Indeed, in what is one of the closest ever finishes to a Men’s Super League season, four of the top five teams now have five losses apiece, to ensure that next weekend’s top of the table battles – which sees Templeogue welcome Tralee, and Swords travel to UCD – will be must wins for all teams involved.

Elsewhere around the league, KUBS secured their second win of the season against fellow Dublin club, Eanna on Saturday night, running out 75-67 point winners in the end. Pyrobel Killester had the better of UCC Demons in Clontarf on Saturday, DCU Saints and Maree each broke the century mark in a ding-dong battle in Dublin, which Saints eventually won out 109-102, while Black Amber Templeogue had too much for Moycullen in their battle in Galway on Sunday.

Courtyard Liffey Celtics remain top of the Women’s Super League table this weekend after a thrilling 60-54 point win over Ambassador UCC Glanmire on Saturday evening. Top scoring from Aine O’Connor and Sorcha Tiernan helped Liffey secure the win in a nail-biting game, where the lead changed hands on numerous occasions in the second half, but the remaining games of the season may prove to be tough for Liffey as they bid farewell to star guard, Jazmen Boone, who is moving to Australia.

“We're absolutely delighted with the win,” said Celtics’ head coach, Mark Byrne afterwards. “It was a really tough and hard fought game, there was a lot at stake and it was a bit nervy at times, but to come up trumps in a big game is really, really satisfying.”

That win may see them top of the table, but the four teams directly below them all have four losses each, teeing up yet another thrilling finale in a Basketball Ireland league. Singleton SuperValu Brunell continued their good home form on Sunday, with a 70-56 point win over Maxol WIT Wildcats, while IT Carlow Basketball kept their spot in the Women’s Super League safe for another year by overcoming NUIG Mystics.

In the final game of the weekend, DCU Mercy stormed home to a comprehensive win over Portlaoise Panthers to see them move to second place on the table.

In the Men’s Division One meanwhile, another superb finale to the season is in store. Next weekend (March 2nd-4th) is the final weekend of fixtures in the regular season, and with three teams still in contention for the title, it’s all to play for. Two of the top three teams will face each other when Ballincollig welcome neighbours Neptune, while Keane’s SuperValu Killorglin need to overcome Fr Mathews. The battle for fourth place is just as close, with Fr Mathews and IT Carlow Basketball both hoping to secure that final play-off place.

This weekend, Killorglin had the better of Neptune in Kerry, while Fr Mathews played out a tough battle against Ulster University Elks on the road and earned a hard-fought victory.

The Women's Division One battles at the weekend served up some thrilling battles, with Meteors winning big at home against UL Huskies on Saturday afternoon. Top scoring from Shannon Brady and Kate O'Flaherty inspired Meteors to a huge second half performance to win out 61-57 in the end.