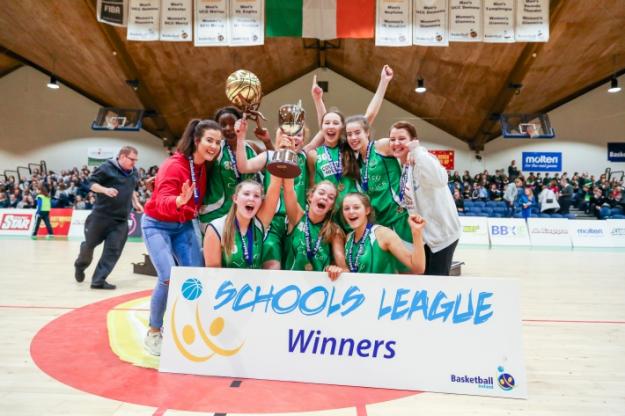 Under 19 A Girls All Ireland Schools League Final

Coláiste Chiaráin Leixlip completed a super double of All Ireland titles this afternoon as they were crowned the Under 19 A Girls School League champions following a 41-45 point win over Holy Faith Clontarf in Tallaght.

Today’s victory adds another Cup to the school’s trophy cabinet as they were also crowned Subway Schools U19 A Cup champions back in January.

Today though, it was all about the fourth quarter for the Kildare school as, despite trailing by 17 points at one stage of the game, they launched the comeback of all comebacks to win out the title in dazzling fashion.

The fourth quarter charge was led by Irish internationals, Sorcha Tiernan and Ciara Bracken, as they brought their side back from an eight-point deficit at the end of the third, to take the lead midway through the fourth thanks to a huge long range three from Tiernan. That, coupled with huge defense from Niamh Masterson, was the winning of the game as momentum swung firmly in their favour and they didn’t look back.

It was a battle of epic proportions for Leixlip though to get that win, as a bright start from Holy Faith saw them drive into a 19-9 point lead at the end of the first quarter with great scores from Niamh Kenny and Maeve Ó Séaghdha, who were two of the shining stars for a strong Holy Faith side, while a strong defensive display from Bronagh Power Cassidy kept Holy Faith in charge up until the end of the second, 34-19.

In what was truly a game of two halves, a blistering second half display from Colaiste Chiarain began in the third quarter, as they outscored Holy Faith 11-4 to close the gap back to eight going into the last. Momentum swung firmly in the Leixlip school’s favour by the fourth, with Ciara Bracken the bright spark driving hard at the Holy Faith zone, while MVP Sorcha Tiernan got the baskets when it mattered most to see her side home to a 45-41 victory in the end and another All Ireland title.

Under 19 A Boys All Ireland Schools League Final

Under 19 A Boys All Ireland Schools League Final

St Joseph’s College The Bish of Co. Galway stormed home to the Under 19 A Boys All Ireland Schools League title this afternoon, with a 52-35 point win over Intermediate School Killorglin.

The Bish were in control from the off, driving into an early 17-9 lead at the end of the first with good scoring from James Connaire, Padraic Lenihan and Liam Nolan.

Killorglin were battling hard at the other end though, with Darragh O’Connor and Eoin Evans working hard on defence, and getting some vital early scores to keep them in touch.

A strong second quarter display from The Bish saw them widen the gap to 27-13, with James Cummins and Nolan shining brightest once more, while strong defence from James Connaire kept Killorglin to scoring just two baskets, one each for Dara Casey and Eoin O’Sullivan.

Momentum stayed with The Bish in the third, with Nolan again one of the shooting stars for the Galway school, while Connaire and Cummins also bagged some good scores. Killorglin were really beginning to cause problems at the other end though, with Evans, O’Connor, Dara Casey and Roan Moriarty finding the target in style, and Moriarty proving to be very hard to guard for the Bish, who still held the lead, 45-27 going into the last.

A much closer affair ensued in the last as Killorglin continued their good run from the third quarter, to close the gap back by the midway point. Super defence from Aaron Kiernan for The Bish managed to stem the tide somewhat, and a huge block for him, followed by an even bigger three-pointer at the other end saw The Bish back in control and, despite the best efforts of Killorglin, they managed to hold onto their lead in style, winning out 52-35 in the end.

Revenge was sweet for Jesus and Mary Gortnor Abbey this afternoon as they overcame St Colmcilles CS Knocklyon 28-22 to win the All Ireland U16 C league final.

In an exact repeat of the Subway Schools Under 16 C Girls final back in January – which St Colmcilles won - today’s final certainly didn’t disappoint, with the game neck-in-neck from the midway point of the first quarter right through until the final buzzer.

Indeed, fans at the National Basketball Arena in Tallaght were certainly treated to another thrilling final this afternoon. A stand-out display by St Colmcilles’ Emma Mullins was the talk of the Arena as the talented young teenager 20 of her side’s 22 point tally, while Caoimhe Walsh put in an MVP display for Gortnor Abbey to help drive them home to glory.

Gortnor Abbey got the brightest start with good scores from Niamh Maughan, Eilish Keane and Caoimhe Walsh to open up a 7-0 run early on, but Emma Mullins soon found her stride and by the end of the first, had scored all eight of her team’s points to see them trail 11-8.

The second quarter was another close and tight affair, with Keane, Regan and Walsh continuing to impress for Gortnor Abbey, but Mullins had a response for everything at the other end, linking in well with Hannah Byrne nicely to leave them behind by just two at the half, 17-15 – with Mullins again scoring all of Knocklyon’s points.

A nervy third quarter followed, with defences reigning supreme. Walsh and Emily Murray led the charge for Gortnor Abbey, and they kept St Colmcilles from scoring until past the midway point in the quarter, when Mullins broke the deadlock followed by a well-taken score from Byrne. Gortnor Abbey still led the way going into the last though, 26-20.

Again, tough defense was the main talking point from the fourth quarter, with just one score each for the full period. Disaster struck for both teams as both Walsh then Mullins were fouled out as they worked extremely hard on defense, but the job was already done for Gortnor Abbey as they held firm to the final buzzer to win 28-22.