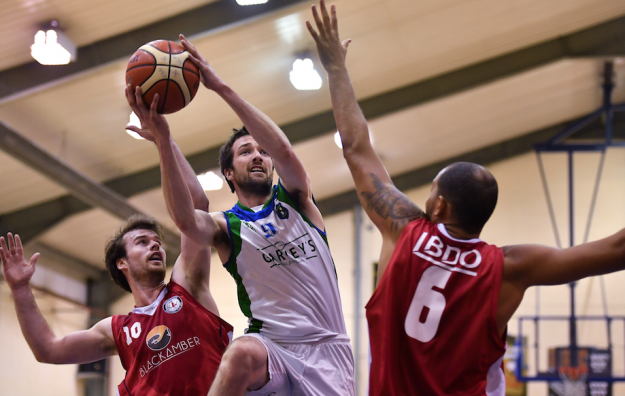 In the Men’s Super League meanwhile the Regular Season champions were not decided this weekend, with both UCD Marian and Pyrobel Killester winning all of their remaining games to see them tied with 17 wins and five losses each at the top of the table. This means that the two sides will meet for the fourth time this season in a play-off final later this week in a winner takes all Dublin derby.

Speaking after his side’s win over Eanna this evening in the last game of the regular season, Killester’s Brian O’Malley said, “It’s been tough playing back-to-back games. We’re delighted to get over the line. Looking at it last Tuesday, it was three games in five days and we knew we’d have to win them all to have any sort of a chance so we’re delighted to be at this point now.

“Playing UCD again - both coaching staff and teams know the others inside out, there won’t be too many secrets. We won the first, then they won one, then we won. The game plans will probably be similar and it will come down to who can execute a little bit better on the day. We’re hoping that luck will be shining on us at the final.”

Elsewhere, Maree secured themselves Super League basketball for a second year this weekend with wins over Eanna and KUBS, while UCC Demons cemented sixth spot for the play-offs with a win over DCU Saints at the Mardyke earlier today.

The win ensures that they are safely clear at the top of the table having suffered just two losses so far this season and though they still have to meet Pyrobel Killester on Wednesday evening, today’s win was enough to secure them the coveted honours.

“We are absolutely delighted,” said head coach Mark Byrne. “When you are season champions it’s due to consistent effort over the full year - you can’t fluke a regular season championship so we are absolutely delighted to have come out on top of what I think what has been a really strong year. I have to say it was a great team effort by all the girls all year long and we’re over the moon.”

Celtics’ star Aine O’Connor was also thrilled to claim the club’s first Super League Regular Season title: “It was an all over super team performance,” she said.

“It was great to get the win over Carlow today as we had dropped a game to them before. It was a nice way to finish up the league and we are really proud of our performance this year. Now that we have that under our belt, our focus is onto vthe play offs now.”

Indeed the battle for final spots in the play-offs is still in the melting pot, with Singleton SuperValu Brunell overcoming Pyrobel Killester in a thriller in Cork earlier today to keep them in contention, while DCU Mercy and Ambassador UCC Glanmire are also hoping for premium position in the top four.

Keane’s SuperValu Killorglin were crowned Men’s Division One champions this evening following a 90-68 point win over Fr Mathews in Cork this evening.

The Kerry team knew exactly what they had to do going into this evening's game as Neptune’s win over Ballincollig earlier today meant Killorglin had to win to avoid a top of the table play-off and they did so in style.

The Men’s Division One champions have been crowned - @Killorglinbball win out 90-68 v @bc_mathews and are guaranteed promotion to the Men’s Super League 2018/19 Congrats guys! #ThisIsSuper #NationalLeague pic.twitter.com/3x90W7NBDu

“It’s an incredible feeling,” said Killorglin head coach, Ignas Sijanus. “After a long season with a lot of ups and downs and changes, we reached that point at the top now and we can celebrate and be happy.

“It’s a small town in Kerry, the players have worked hard and they deserve this. We all know that Super League is a big task, we have a lot of homework to do now before next season, but I believe we’ll be ready though for the new chapter and we’re really looking forward to it.”

Neptune’s big win over Cork neighbours Ballincollig meanwhile sees them in second place in the Division, with a chance now to also be promoted as they will contest a play-off with 11th in the Super League .

In Division 1B Scotts Lakers St Paul's Killarney won out their big clash against Paris Texas Kilkenny in a thriller in Kerry, while Dublin Lions had the better of LYIT Donegal and LIT Celtics just edged Ej Sligo All Stars.

On Sunday, IT Carlow Basketball cemented fourth place with a win over near neighbours, Portlaoise Panthers, while Paris Texas Kilkenny won out over Gamefootage.net Titans.

It was a big weekend of games in the Women's Division One, with Fr Mathews kicking this off early Saturday morning with a win over Ulster University Elks, but they lost out to Meteors in Dublin on Sunday. Griffith College Swords Thunder put in a big effort Saturday evening to overcome UL Huskies, while Marble City Hawks had the better of Fabplus North West on Sunday evening.

Over in the Women's Division One meanwhile, Ulster University Elks booked their spot in the final of the Women's D1 Champions Trophy today with a semi-final win over UL Huskies. They will meet Fr Mathews in the final.

Well done to our Women's team on advancing to the finals of the Champions Trophy after overcoming @ULHuskysBC in a very close game. Safe trip home. https://t.co/oseNeAfa1k